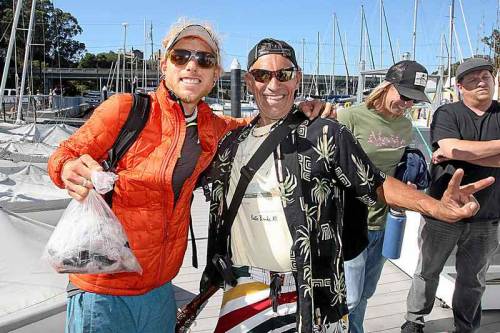 SANTA CRUZ – Around 40 people, half of whom were homeless, spent last Monday afternoon fishing on the Monterey Bay aboard a luxury yacht.

The trip was organized by Sweaty Sheep Ministries, a Santa Cruz church group that plays sports and games to build relationships across socioeconomic groups.

Chris Roberts and his 11-year-old son, Casey, both formerly homeless, caught the largest fish and the first fish of the day, respectively. Later, they attended a bonfire at Twin Lakes State Beach, where the group barbecued the 70-plus fish they caught.

“We thought it was a rock, but the rock kept moving,” said Roberts of the 25-pound lingcod he caught.

Before Roberts found work at Santa Cruz’s Homeless Garden Project last year, he and Casey were living in a car. Roberts had just been released from jail, and was recovering from a 20-year drug addiction, he said.

At the garden project, Roberts realized he was good at working with dirt and plants, and everything changed. A Santa Clara County judge was so impressed with his progress that he had $3,600 of fines deleted and charges deemed never incurred, said Roberts.

“I went from looking at three years at San Quentin to being discharged,” said Roberts, who now lives in a Live Oak apartment with his son. 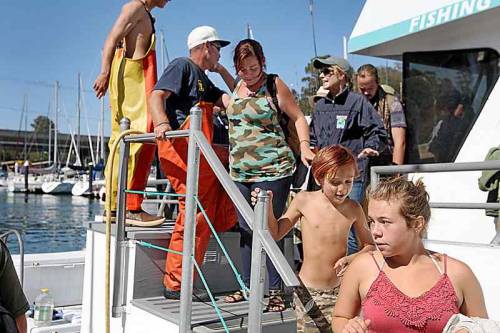 People step off a charter boat last Monday after a day of fishing on the bay thanks to the Christian group Sweaty Sheep who chartered the boat for two dozen homeless. (Photo by Dan Coyro, Santa Cruz Sentinel)

“Our idea of interacting with the homeless is sitting on this side of a table and handing food with an ice cream scoop, and serving them,” Althaus said. “We need to eat together.”

In the fall, Althaus is planning a softball league for nonprofits, businesses and churches, in which each team has some homeless players. He wants groups to realize that homeless people are an important part of the workforce and of congregations.

“People have to start realizing these are normal, productive people. They’re human and they’ve got value,” he said.

Part of the solution should be more conversations and relationships between the homeless community and local leaders, he said.