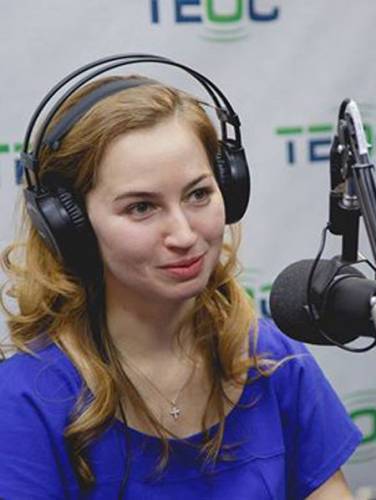 Russian journalist Anastasiia Rozykova is among the 14 International Peacemakers set to speak to PC(USA) congregations and mid councils. (Contributed photograph)

LOUISVILLE — Anastasiia Rozykova, a Russian journalist who grew up in an agnostic family, is among 12 Presbyterian Peacemaking Program’s International Peacemakers. She came to faith during her university studies, after taking a course in world religions and reading about Martin Luther and his 95 Theses.

A member of Sts. Peter and Paul Evangelical Lutheran Cathedral in Moscow, Russia, a congregation of the Evangelical Lutheran Church of European Russia, Rozykova received her degree in television and radio journalism from the Ostankino Institute of Television and Radio Broadcasting. She also earned a diploma in inter-religious dialogue at St. Andrews Biblical Theological Institute in Moscow, an ecumenical institute for theological studies, as well as a publishing house for theological literature.

As a journalist, Rozykova works for Teos Media, a Christian radio station. The station was looking for someone who could speak about faith and religion in very simple language, as opposed to the language a priest might use. She was a guest on the program, representing the new generation in the church. After her interview, station managers asked if she would be willing to create something interesting for people like herself.

She now hosts a radio program that shares the voices of young Christians. She interviews young people about their hobbies, jobs, struggles and relationships; how they serve in church, and about their faith crises and their faith journeys.

Rozykova recently participated in the Evangelical Lutheran Church of America’s International Camp Counselor’s Program. She served at the Carol Joy Holling Camp, Conference and Retreat Center in Ashland, Neb., one of the ELCA’s largest camps in the Nebraska Lutheran Outdoor Ministries. She helped campers plan and implement their daily program while providing continual support and supervision.

In her visits to PC(USA) churches, she will share about the history and future journey of Evangelical Lutheran Church of European Russia as the church rebuilds after the persecution it’s experienced.

Rozykova is knowledgeable about the history of the Evangelical Lutheran Church of European Russia and will reflect on the journey of the church after the 1991 dissolution of the Soviet Union as she visits congregations and mid councils in the North Alabama Presbytery, the Presbytery of North Central Iowa and the Presbytery of Eastern Oregon through Oct. 17.

Since 1984, the Presbyterian Peacemaking Program, a mission of the Presbyterian Church (U.S.A.)’s Compassion, Peace and Justice ministry, has helped make it possible for international peacemakers to inform Presbyterians, open hearts and minds, touch lives and inspire new ministries.