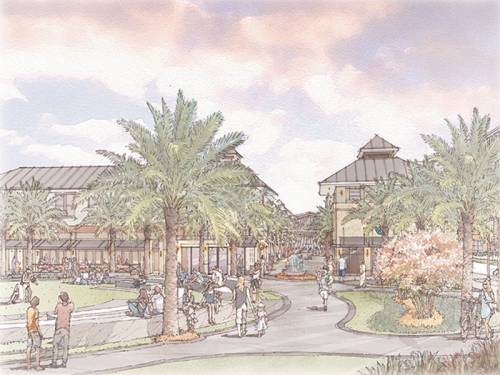 A rendering of Sanctuary Village shows a bold vision of ministry in Florida that will include not just a church, but also health care facilities, affordable housing, restaurants, schools and office space. Kona Gray

In the fall of 2016, the Rev. Dwayne Black, pastor of The Sanctuary Church, found himself behind bars more than once for feeding the homeless on Florida’s Fort Lauderdale Beach. His arrest gleaned international attention. In his defense, Black says he “follows the red letters in Scripture.”

“This is what we [ministers] signed up for,” he said. Black, who says no human being should be left behind, continues to feed 300 to 400 people a week despite the ordinance against it. The city has given up enforcing the ordinance.

This full-throttle, expansive, 60-something-year-old visionary was called to The Sanctuary Church in Fort Lauderdale seven years ago with one mandate: Turn the church around with its aging and dwindling membership on its eight-acre waterfront property, or close its doors.

“The church was either going to be the biggest albatross or the biggest blessing,” Black said.

“When I came to Sanctuary Church in 2011, our membership was down to 25 people, many of whom were in their 80s. There was a sense of security in not changing, but God is always about change — God is always moving. It’s dishonoring to those who came before us if we don’t change,” said Black.

“We partnered with every organization you could think of. I learned I had to go to the people, not expect the people to come to me, to minister to them,” he said. The congregation also learned that they had to give everything away — space and place — to move on to bigger things.

“Hold nothing back; don’t be afraid to trust God’s provision,” said Black. “Everything we do is about missions.”

In other words, the church began living into its name as a place of sanctuary.

Working side by side

On an average day, more than 400 people attending Alcoholics Anonymous meetings are present on the church campus. Black is visible at their meetings and has an open office door policy, establishing personal relationships with those who attend. A number of other recovery groups meet on campus as well.

For Black, though, partnering is more than offering space on the church’s campus. It means working side by side (in and out of jail) with people like Arnold Abbott of Love Thy Neighbor, an interfaith nonprofit organization that is on the forefront of helping the homeless in Broward County. With more than 10,000 homeless men, women and children, Love Thy Neighbor works to preserve the integrity of the individual as well as to help them help themselves.

Black joins with other volunteers to provide meals for more than 1,400 homeless people per week. The Sanctuary Church even opened its doors to help train those in recovery through Love Thy Neighbor’s culinary skills training program. Over the past two years, the program has had more than 400 graduates, helping the homeless get off the streets and back into society as productive, contributing members.

The church is living out its mission as God’s ongoing presence in the world, says Black. Passionate about relieving suffering and fighting social injustice, and joining the God of the oppressed in living out the transforming message of the resurrected Jesus, the church has teamed up with so many other groups that the list reads like a table of contents. Included among them is All Saints Soup Kitchen, Refuge Recovery, community outreach programs such as Abandoned Pet Rescue, Toys for Tots and the LGBT Chamber of Commerce, as well as a variety of educational programs and institutions: Delmar Arts Academy and Florida Singing Sons Boys’ Choir, for example. Add to the list health services such as Life Line Screening, a preventive screening program, and OneBlood, a blood donation organization. At Thanksgiving, the congregation collaborates with the sheriff’s office, delivering 4,500 turkeys to those in need.

What’s clear is that Black believes in a seamless gospel — where salvation and social justice go hand in hand.

“The church is the best when it serves, sacrifices and loves, caring about the things God cares about. We were created to live for something larger than ourselves,” he said.

That something “larger” was about to come.

Every day since his arrival in 2011, Black has faithfully walked around the church seven times and prayed. One day, as he walked and prayed, he had a vision transform the waterfront campus into a residential, commercial and community center where multitudes would come. It would be called Sanctuary Village, incorporating affordable housing, an amphitheater, green spaces, retail establishments and restaurants, health care facilities, schools, offices, outdoor education and a place for the celebration of the arts. Every business would give a small percentage of its profits to a mission of their choice that impacts the community.

“This is how to do church — to experience God in a multitude of ways, with the church at the center,” Black said of the idea.

One of the first things Black had to do was consult a land planner to see if his vision could in fact become a reality. The Presbytery of Tropical Florida provided a loan to the church for the session to work with a land planner and help them consider what God might be calling them to do with the church property.

Landscape architect and urban designer Kona Gray, of the global firm EDSA (which has its world headquarters in Fort Lauderdale), was approached.

“The eight-acre campus is a valuable piece of property. Developing it responsibly is a way to be a good steward of the land. By highly utilizing it, it will leave a legacy for the future,” Gray said, adding, “I told Rev. Black that yes, we absolutely can do this. It’s a fantastic project that will transform and provide space for the church and for the community.”

The Sanctuary Church borders the highly trafficked U.S. Highway 1, but the church itself is not visible from the road and most people aren’t even aware the church exists. Its waterfront borders on Middle River, which joins New River that runs into the Atlantic Ocean. With climate change and global warming on the minds of most Floridians, the property will be developed in such a way as to improve and preserve it for the present time and for the future, Gray says.

“We look at all the influences of the land design for resilient landscaping, making it better than before. Right now, the land is fallow. There is very little public marine space in Fort Lauderdale; most of it is private, so this will open up the opportunity for the public,” Gray said. “This is the kind of project that the presbytery should support as it will provide ongoing revenue far into the future for the mission of the church.”

The presbytery has indeed partnered with the session to see this dream come to fruition.

“Sanctuary Church was a church in decline and then a few years ago caught the wind of the Spirit that mission is their point of contact with how God is moving in the community. In an effort to truly live missionally, the church has fully embraced its calling to live into, and even create, a place where community is for all God’s people,” said the Rev. Dr. Daris Bultena, general presbyter.

Bultena was invited to participate in the “Master Plan Workshop” that Gray held with the church’s session. During that workshop, he sat back and watched the session members express their desire for a place that builds community, welcomes the poor, provides service, has space for nonprofits to come together, and lives fully the commitment that it is all about mission. It was a moment when Bultena says he saw what the Rev. Dr. J. Herbert Nelson, II, Stated Clerk of the General Assembly of the Presbyterian Church (U.S.A.), has been calling “the kingdom of God.”

“I believe when we really live out the call of God on our lives, then some really big and incredible things can happen. This church is not doing this project out of desperation or to stay alive. They are doing this because of their passion for mission — that passion drives all their desires,” Bultena said. “As I introduce people to the building project of Sanctuary Village I often ask a question: What if a group of people passionate about mission — a church — were to take all they had and develop it in such a way that it becomes a village where everything that happens there generates more mission?”

One answer he offers to that question is that the church is often looking back 50 years, thinking that was the finest hour of this church, when this very moment, and living into this dream, may indeed be the finest moment in the life of The Sanctuary Church.

“Other churches and pastors in the Presbytery of Tropical Florida are very interested in what is happening because it touches us deep — we are ready to really do something more than decline; we know God has more in store for us,” Bultena said.

Groundbreaking for Sanctuary Village is expected to start at the end of this year with the construction of a $20 million housing project.

Sherry Blackman is the pastor of Presbyterian Church of the Mountain in Delaware Water Gap, Pennsylvania.