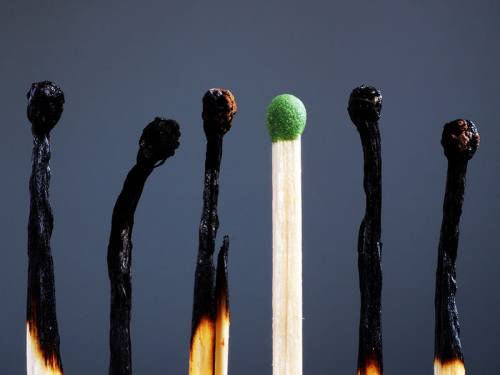 Burnout. Just reading the word is enough to cause the shoulders to droop, the body to want to curl up in a ball and find somewhere to rest. For many church leaders it can be an ever-present companion in the life and ministry of the congregation.

But is this God’s call? Is burnout an unavoidable challenge in the life of ministry? Or is there a way out, a way through? When faced with a sense of being overwhelmed and under-energized, is there something that church leaders can do to find refreshment and new life?

The Rev. Laura Sias-Lee, pastor of Sashabaw Presbyterian Church in Clarkston, Michigan, began seeing the impact of burnout as she looked out at the congregation on Sunday mornings during worship.

“I realized that there were a handful of people taking on most of the leadership roles, and I realized those people were getting tired,” said Sias-Lee. “For example, the session would meet and would have great ideas, but then we would ask, ‘But who is going to lead it, to be in charge of it?’”

It would always come back to that same group of already busy people.

“Busy people make the time to do more and more — if you want the job done, ask the busy person because they will get it done,” she said. But Sias-Lee noticed that it was taking a toll. She herself was feeling the stress of burnout as well.

Sias-Lee began talking more about the importance of sabbath keeping but when she talked about rest, she said, those busy leaders looked at her “like I was nuts.”

“We made a huge wall chart for those in the congregation of all the things they could do on Sunday, instead of coming to worship, but still to be mindful of God,” Sias-Lee said. Then she asked the congregation to report back on how they spent their sabbath time.

Some chose to go to the Detroit Institute of Arts and look for God in the arts. One woman who had always gotten the Sunday New York Times, but never had the chance to read it, chose to pray over the stories she finally had time to read. Another man went to his daughter’s pool to swim, float, meditate and practice thankfulness — something he never would have taken the time to do, had it not been suggested. One woman even gave herself permission to not do anything. If God took a day of rest, why couldn’t she?

The twice-monthly Saturday night worship service experiment not only allowed the congregation to experience the power of sabbath rest, it also provided the space to dream again.

“We began to rethink a lot of things that we had just done because they were traditional,” said Sias-Lee. A self-described “traditionalist” herself, she and the congregation both began to see ways to include more creativity in their life together. During the Saturday night service, Sias-Lee is now more likely to use art and silence as part of the service.

“I think it has also made people more open to new ideas. It has opened people up to the idea that church doesn’t have to just be one way,” she said, adding that it has also helped the congregation to “see God” in the everyday and all around them, not just on Sunday mornings.

“When you are given the time and your pastor tells you that you are supposed to spend Sunday morning looking for God, it is amazing where you see God the rest of the week as well,” she said.

Ministry as an offering

The Rev. Dr. Tracy Mehr-Muska  is the Protestant chaplain at Wesleyan University in Middletown, Connecticut, where she has served for the past seven years. She admits that it “is easy to get bogged down and feel as though the needs exceed the time I have.”

Because of that, and the need to find a healthy and sustainable way to continue to minister amid those ever-present needs, Mehr-Muska began conceptualizing what she was doing in a new way.

“I began to use this concept that the ministry is in the offering,” she said. Rather than referring to an offering in a collection plate, however, this kind of offering could consist of a program, or a newsletter, or another ministry of presence for the students.

“We hosted a wellness month awhile back focusing on various aspects of wellness, such as physical, spiritual and social,” Mehr-Muska said. The wellness month consisted of a variety of activities, from practices to be done alone in one’s dorm room to those participated in as a community.

“No one really showed up to anything we offered, even things that we thought would be really fun,” she said. But what was surprising is that students reported an overall increase in their wellness.

“If you look at the program on a purely numerical basis, it was a failure. But if you look at it in terms of the overall wellness, it was actually a huge success,” Mehr-Muska said.

It’s not that the numbers are never important. They can be helpful to gauge where the Spirit is leading. But for her peace of mind, Mehr-Muska knew she needed a way to measure herself and her ministry that looked at a wider picture.

This shift in seeing that “ministry is in the offering” can be a difficult one in a church culture used to measuring how many babies were baptized or how many people were served communion on a particular Sunday morning.

So Mehr-Muska regularly asks herself: “How do you measure presence and not just programming?” Instead of burning out by focusing on programmatic or numerical success, is there a way to instead ask, “What impact am I having?” She admits that this approach is not always easy.

When Mehr-Muska graduated from her clinical pastoral education program, she was assigned to hospice work. As someone who likes measurable results, she says hospice would have been her last choice.

“In hospice ministry, you are not going to save anyone. Your patients are going to die, and that’s why you’re there,” Mehr-Muska said. “So you have to change your definition of what is worthwhile.”

Self-care and sharing the work

The Rev. Floretta Barbee-Watkins is pastor of The Avenue Presbyterian Church in Charlotte, North Carolina. Burnout is not only a topic that she has studied as part of her doctorate, it is also something she has experienced in her 25 years of ministry.

“You can’t be all things to all people all the time, so knowing when to say ‘yes’ and when to say ‘no’ and learning to practice personal sabbath is essential,” Barbee-Watkins said.

In one instance, Barbee-Watkins was on vacation when one of her parishioners passed away. It was a tragic situation, and she felt the need to get the elders together to come alongside the family. She felt that it was important to be there, but she also acknowledged that much of this work was the work of the deacons of the congregation.

“We clergy need to allow the people in the congregation to do what they are called to do as well. We need to trust people to do the right thing and not feel like it is our responsibility all the time,” she said.

Barbee-Watkins pointed out that ruling elders and teaching elders have the same ordination vows except for one — the sacrament.

“If the ruling elders are to be involved in the spiritual maturity of the congregation, then they have to be involved directly with that and not just limited to making decisions about how money is spent,” she said, emphasizing that ministry is about sharing the load, sharing responsibilities, and the pastor not feeling the need to meet every need.

But it can be hard to do, she admits.

“We clergy are often caregivers and we often feel the need to prove our worthiness,” Barbee-Watkins said.

The idea — and frequent joke among friends and parishioners — that clergy work for only an hour on Sunday morning and an hour for Bible study during the week can lead many pastors to seek to debunk that myth through their herculean efforts to meet the congregation’s needs at any hour any day. That’s a reason Barbee-Watkins is a proponent of self-care.

Practical ways that Barbee-Watkins has tried to implement self-care include not answering her phone before or after certain times of day and making sure that she takes regular times of rest and refreshment. The congregation has also shifted to having all committees meet on the same evening. A shared meal begins the evening, and child care is provided. The pastor can then visit each meeting to “check in” without having to be at the church multiple nights a week for various meetings.

Whether through endless commitments, impossible expectations or difficulty in setting appropriate boundaries, burnout is a serious issue that faces church leaders, both clergy and lay. But it is not an impossible challenge. Through focused attention on practices that create health rather than deplete it, pastors and congregations can cultivate environments for thriving and flourishing. Learning how to say no, how to attend to one’s own spiritual life and how to develop resilience — along with seeking support from therapists, mentors or coaches — are just some of the ways that pastors and congregations are finding the path of well-being in answering God’s call to love and serve the world.

Erin Dunigan is a PC(USA)-ordained evangelist living in Baja California, Mexico, where she founded Not Church, a gathering of atheists, agnostics and believers who wish to deepen their spiritual journey. She is also a freelance writer and photographer who finds joy in riding her horse daily along the beach.