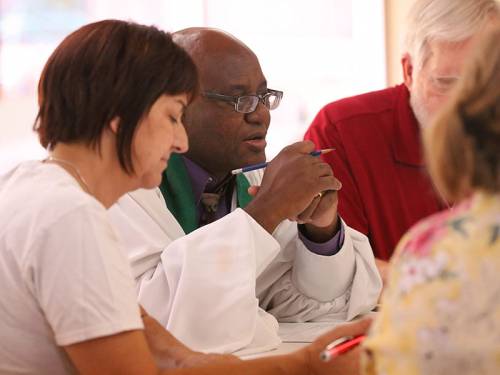 As the Rev. Bobby Musengwa leads his flock, he keeps his eyes open to those who are being called to ministry. He takes notice of the gifts in others and nurtures those gifts, just as he was once nurtured. Courtesy of Lee Hinson-Hasty

Growing up in South Africa, Bobby Musengwa couldn’t imagine coming to America to attend seminary. The path simply wasn’t visible to him — and he couldn’t imagine serving as a pastor. But it was his uncle’s friendship with Heath Rada, who later served as moderator of the 221st General Assembly (2014), that brought this possibility to light for him — and the mentoring community of professors, pastors, family and friends reinforced Musengwa’s call.

Musengwa soon found himself in the U.S., encouraged by his family to leave South Africa amid growing concerns about his safety in apartheid South Africa. He attended and graduated from St. Andrews Presbyterian College (now St. Andrews University) in Laurinburg, North Carolina, and worked at Montreat Conference Center each summer. That’s where he reconnected with Rada, who then invited him to attend the Presbyterian School of Christian Education (now part of Union Presbyterian Seminary). Although Musengwa initially rejected the idea, he decided to try it out.

“He became a mentor that allowed me to safely explore the journey or the call into ministry,” Musengwa recalled. “I had in my mind that I’m just an educator.”

Musengwa did serve as a Christian educator, but Rada and others encouraged him to pursue ordination as a pastor. “Heath taught me that I could be an educator, a teaching elder even, as a pastor.” Musengwa earned degrees from Princeton Theological Seminary. He now serves as the “Rev.” of Maximo Presbyterian Church in St. Petersburg, Florida. This is the third church he has served.

Mentoring for ministry has an increasingly important role in today’s Presbyterian Church (U.S.A.). Over the past decade, there have been about 500 pastor retirements each year and only 200 ordinations. That trend will continue until mentoring those called to pastoral ministry becomes a priority for Presbyterians.

Sharon Daloz Parks, a faith development expert and director of Leadership for the New Commons, an organization in Clinton, Washington, that provides consulting services in the areas of leadership and ethics, believes that a mentoring environment and culture are essential for anyone, and especially young adults, to discover their vocation. In her book Big Questions, Worthy Dreams: Mentoring Young Adults in Their Search for Meaning, Purpose, and Faith, Parks writes that mentoring environments provide a “network of belonging … [and] promise a place of nurture for the potential self.”

Families, churches and even worksites can be mentoring environments, networks of belonging or mentoring communities. A whole community of mentors may already exist with the potential to nurture Christian vocational discernment. That potential is realized when gifts are identified and intentional discernment of gifts begins. That can start with the mentor or the mentee.

We are not alone in the church as we discern what God wants us to do with our lives. All that we have, including our lives, is entrusted to the care of the community most often embodied in congregations.

I’ll never forget a college student in the first congregation I served. He began the process of discerning a call to ministry as what we call an “inquirer” by meeting with me and then our session. Later he would meet with the presbytery. The new inquirer asked the session for their support in finding out how to use his gifts best as a person of faith to make a positive difference in the church and the world. He trusted me, and he trusted them.

After the meeting, the newly recommended inquirer and I privately debriefed the session meeting in the church parking lot. Feeling truly supported, the inquirer suggested, “Wouldn’t it be great if every youth at our church had the support I am getting?” With a lump in my throat, I managed to whisper back, “Wouldn’t it be great.”

Seminaries are partners, too

Our seminaries stand ready to prepare those with gifts for ministry for service in the church. We don’t have to wait to enroll or send someone to seminary to partner with them. The admissions staff serve as gifted members of a discernment team. Don’t wait until you or someone you know is called to seminary to contact one or more admission officers. I wonder who in your congregation will play a role in encouraging someone called to heed the still, small voice they may hear, much as Heath Rada did with Musengwa years ago.

In fact, maybe the boy Samuel wasn’t mistaken when he heard a voice calling his name three times, the voice that he believed to be elder priest Eli in 1 Samuel 3. Maybe God was speaking through Eli. The text tells us that Eli’s eyes and ears were declining, but maybe not his mind and tongue. Eli clearly recognizes, in the end, that God was doing a new thing with a new leader for a new time and a new generation embodied by this boy under his care, Samuel.

“My excuse was I didn’t finish my Hebrew,” Musengwa said. “Roger said, ‘Oh, we have a professor here who teaches Hebrew.’ He was able to connect my deficiencies with the resources to fill that.”

In his service in St. Petersburg, Musengwa extends the loving hands of Christ to the community around the church. He has created new programs and ministries that draw in the neighborhoods around the church, changing the nature of the congregation.

Musengwa, too, has had the opportunity to mentor others. He encouraged the worship leader at his church to go to seminary.

Lee Hinson-Hasty is, at heart, a sailor who knows how to catch the wind of the Spirit and teach others to do the same. An ordained minister with his doctorate, he has worked for the PC(USA) for more than a decade. He enjoys preaching and leading conferences and retreats in congregations and supporting future ministers through the Theological Education Fund as senior director of theological education funds development at the Presbyterian Foundation.

Be intentionally available to others. Show up early for a gathering at church or stay late.

Be active in your faith, authentic, transparent and trustworthy. Others will seek you out.

Be observant of others. Notice their gifts and passions.

Ask youth, “How would the people who know you best describe you?” After everyone has shared, give thanks for the ways each of them is contributing to the world. As a closing, ask the group, “Who would be the best person to offer our closing prayer?” Invite them to pray. Afterward, take a few moments to check in with that person who prayed. Ask them if they’ve ever thought they might be called to ministry. In many cases, their eyes light up and they say yes. Engage them in a deeper conversation. By starting the conversation, the gifts for ministry are being seen and affirmed.

Mentoring: Biblical, Theological, and Practical Perspectives, edited by the Rev. Dean K. Thompson, president emeritus of Louisville Presbyterian Theological Seminary, and the Rev. D. Cameron Murchison, dean of the faculty emeritus of Columbia Theological Seminary, brings together a roundtable of mentors who share stories from Scripture, schools and communities of faith inside and outside the church that expand our vision and imagination for nurturing the next generation of Christian leaders.

Greenhouses of Hope: Congregations Growing Young Leaders Who Will Change the World is a preachable collection of stories edited by the Rev. Dori Grinenko Baker, a researcher for the Forum for Theological Exploration and minister in the United Methodist Church. The book is a primer on growing leaders and the church from real-life stories.