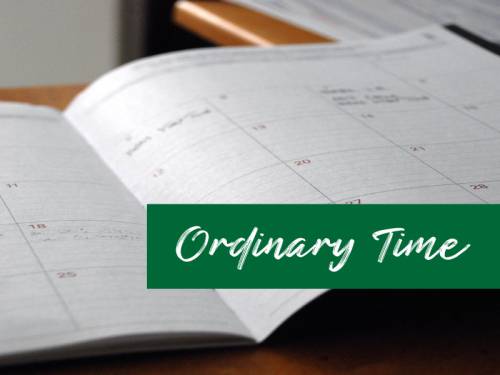 When I began writing this column, I imagined the fun I would have looking more closely at those feasts of the Church that are overlooked. What I failed to consider was a need to reckon with Ordinary Time. It’s a season of the Church that occupies more than 30 Sundays each year, split between a handful of weeks after the Epiphany (Jan. 6) and a large swath of time stretching between Trinity Sunday, which is May 30 this year, and Christ the King Sunday, Nov. 21.

To call the time “ordinary” is not to suggest it is run-of-the-mill or blasé. Rather, its name is derived from “ordinal,” as in “ordinal numbers” (first, second, third, etc.). One could be forgiven for being less than enthusiastic about a season that takes its name from counting! Other titles associated with the season — such as “time after” Epiphany and “time after” Pentecost — do little more to entice, as they refer not to the season itself, but to what immediately precedes it.

The challenges of a full-throated embrace of Ordinary Time do not end there. Both cycles of the Ordinary Time season occur when church attendance often wanes. In many areas, the time after Epiphany is a time of snow and freezing rain, while the summer months following Pentecost often bring an exodus of congregants to backyard gatherings. The vastness of Ordinary Time can easily lead to a feeling of being unmoored. And yet, it is perhaps the ease of getting “lost” in Ordinary Time that also makes it a potentially important season.

The lectionary in Ordinary Time often patterns itself thematically after the primary feasts of Epiphany and Pentecost, inviting the Church to examine the many ways that Jesus Christ is revealed to the world, and affording the saints ample opportunity to plumb his sermons and parables with a mind toward discerning the Spirit’s call today. Perhaps rather than referring to the between-feast seasons as “Ordinary Time,” it might be helpful to rename them “Epiphanytide” or “Trinitytide,” for we are not focusing on the “time after” but called to live in the “time of.”

Asking “What time is it?” might be a helpful exercise for individuals and congregations moving through Ordinary Time. But already knowing it is the time of Christ’s revelation, we might want to answer the question more specifically:

By doing this, congregations are given a chance to identify the place they find themselves in, and the particular ways they have been called to serve. It also opens congregations to many opportunities in which to celebrate. For a congregation whose date of charter falls within the season, the Sunday closest in Ordinary Time might become an occasion for rehearsing the community’s story. Communities of faith might engage in a day of service together in lieu of their typical worship, or they might draw together to focus on fellowship instead.

In short, congregations can do the things that are – if you will permit me – “ordinary.” The task, though, is to begin seeing anew that the ordinary ways of being church are actually far from mundane. The reason we have covered dish suppers is not just because it’s something nice to do, but because Christ has been revealed to us, and the Spirit beckons us forward as disciples of the risen Lord. And that makes this time together special.