Livestream services are part of the cross-country adventure 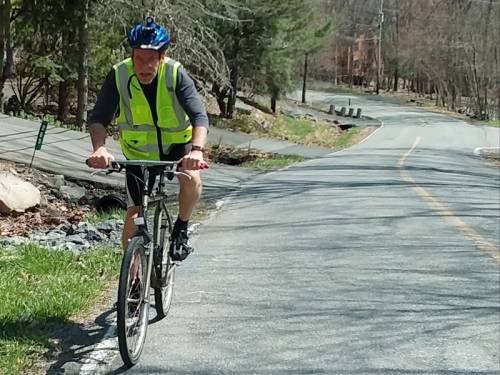 Sixty-one-year-old Rev. Chuck Monts is cycling once again to raise awareness of the hunger that is growing in the country. This isn’t the first time the pastor has hopped on his bike to advocate for a cause. He biked cross country when he was 18, raising money for the Christian Rural Overseas Program. Courtesy of Chuck Monts

Sixty-one-year-old Rev. Chuck Monts is on overdrive, literally, as he cycles cross country to raise funds for The Bowery Mission in New York City, where he served as the community life coordinator for two years.

“I always loved biking, but as I have gotten older, I wanted to bike cross country for a purpose,” said the semi-retired pastor who came to Pleasant Valley Presbyterian Church in Brodheadsville, Pennsylvania, in March of this year.

His two-month journey, which began in June from the Union Rescue Mission in Los Angeles, will conclude in early August when he’ll cross the finish line at The Bowery Mission. While on his adventure, he’ll also be livestreaming worship every Sunday from the road.

“I will nurture my congregation in faith and discipleship while introducing them to the faithful from around the country,” he said. One such “introduction of the faithful” includes the CEO of the Union Rescue Mission, the Rev. Andy Bales, who has two prosthetic legs and joined Monts cycling from Los Angeles across California.

This isn’t the first time Monts decided to shift gears. As a young man, he was ahead of the curve when he and a friend, John Somers, both 18 and freshmen in college, raised $7,000 for the Christian Rural Overseas Program (CROP) by cycling across America. CROP began in 1947 under the wing of Church World Service (CWS), which was founded in 1946. Its primary mission was to help Midwest farm families share their grain with hungry neighbors in post World War II Europe and Asia. Today, CROP Hunger Walks are interfaith hunger education and fundraising events organized by CWS local offices across the U.S and organized by local congregations or groups to raise funds to end hunger at home and around the world. This time, all funds will go directly to The Bowery via Monts’ fundraising page (see the link below) that will be active until Sept. 1.

Monts’ passion for addressing food insecurity has gained traction over the past 30-plus years of his ministry. As a way to draw attention to hunger across America, he’s teamed up with organizations, local food charities, churches and friends coast to coast, asking people to consider joining his team as “movers” and/or “donors,” creating what he calls “move-a-thons.” They can cycle, swim, walk, run or engage in some other physical activity to raise funds for their local food charity.

During the planning stage of his cross-country trek, Monts reached out to churches he once served and to those who had once been a part of his youth groups when he orchestrated bike trips as part of the youth mission trips. In the 1990s, he led a 300-mile bike ride from Saranac Lake, New York, to Portland, Maine, to raise money for a peer dying from Huntington’s Disease.

“I reconnected with those who were teens who are now in their 30s and 40s, to get them on my team and to inspire them to join with me virtually on this venture,” said Monts, who likens cycling to a big lesson in trust: “Biking is a faith experience; you can’t spend your time looking backward. You have to trust; you have to trust that all those cars, RVs and trucks will see you and not run you over.”

He’s also doing things a little differently than he did in 1978. His wife, Debbie, is providing car support as she escorts him through towns across the country. He’ll also be relying on the hospitality of strangers, staying at various churches that can host him and his wife for a night.

On his first cross-country trip, he was up every day at 5:30 a.m., biked until 4 p.m., ate supper at a convenient restaurant, looked around town and then hit the sack by 9 p.m. He and his friend then averaged 86 miles a day, with one day riding 120, with 60 pounds of gear in their bike packs. Six flat tires and six broken spokes later, and on about $10 a day, they reached their destination.

While the 3,000 miles of highways and byways may prove difficult for what some might call “this over-the-hill pastor-pedal-pusher,” one thing is for sure. Monts is in it for the long haul, hoping that every road across America will indeed be a highway to heaven for those who are experiencing physical and spiritual hunger.

Sherry Blackman is the pastor of the Presbyterian Church of the Mountain in Delaware Water Gap, Pennsylvania.

You can follow the Rev. Chuck Monts’ adventure on his fundraising page at my.bowery.org/fundraiser/3166566