Millennials are dying to talk about dying 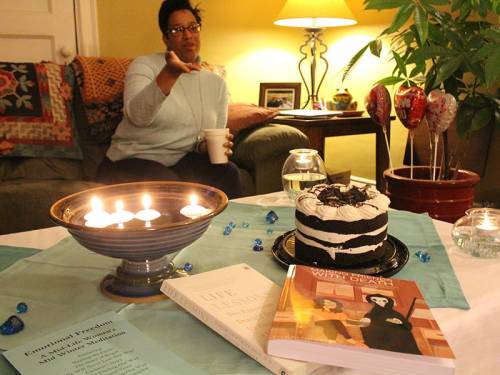 Conversation on life, death and hope takes place at the home of the Rev. Gusti Linnea Newquist. Donna Frischknecht Jackson

In life and in death we belong to God.
So begins A Brief Statement of Faith of the Presbyterian Church (U.S.A.). Yet many Presbyterians struggle to claim this foundational article of faith. The predominant American culture keeps the reality of mortality hidden from public view, even within the church.

In her 2010 study on American attitudes toward dying, anthropologist Dr. Helen Stanton Chapple describes the prevailing cultural view of death as a battle to be won, rather than an inevitable biological transition to be accepted.

A cycle of life-extending medical procedures as well as an ideology of heroism has superseded this ancient rite of passage. Dying has become an isolated act, rather than a generative process that invites society to live more fully in its humanity.

The Rev. Talitha Amadea Aho decided early in her ministry that she wanted to counter this prevailing denial of death in American culture. Inspired by the work of hospice organizations, she was determined to host a congregational conversation on death and dying. When a friend introduced her to the resources of the Death Café movement, she knew she had the perfect way to “take away the sting” of gazing into the abyss.

Begun in 2010 by Jon Underwood in England, the Death Café concept operates with a simple objective: “to increase awareness of death with a view to helping people make the most of their (finite) lives.” As a discussion group, rather than a grief support group, the model allows for flexibility according to the needs of each location. Gatherings may be small or large, heavily structured or loosely designed. They almost always include tea and cake.

As the associate pastor at Montclair Presbyterian Church in Oakland, California, Aho looked to an already-established group within the congregation to host her first café. In addition to the 30 members of the Women’s Coffee and Conversation group, the Death Café theme enticed two additional guests, one of whom traveled from a neighboring presbytery.

As counseled by the resources of the Death Café movement, Aho did not present herself as an expert on the topic of death and dying. Instead, she divided the women into small groups and invited them to share what they had already witnessed or heard about death. She found that everyone brought enough stories to process together without any further intervention from her.

“I trust that everyone has the material to do the work they need to do,” she said of her lack of a specific agenda for the conversation. In fact, the democratic approach encouraged by the Death Café founders “pulls us back to the communitarian roots of our religion.” The rite of passage becomes communal again, just as Chapple recommends.

Indeed, as the small groups shared their learnings and commitments with the larger group, the consensus became clear: the conversation needed to continue, next time with all — men, children, teens and young adults.

For Linda Potter, the impetus to lead Death Cafés was personal. In the span of four years, she lost a close aunt to brain cancer, her father to colon cancer and her nephew to drowning as the result of a seizure. She began to channel her grief through her work as a retreat coach.

A major theme of that work became “How do you want to live, knowing you are going to die?” When she heard about the Death Café movement on National Public Radio, she was determined to lead one.

As the pastor’s wife at First Presbyterian Church in Canton, New York, Potter believed the church would be the perfect setting for what would become an ongoing North Country Death Café. She set about recruiting participants from nearby colleges, one of which offers a mortuary science major.

In the past four years, the North Country Death Café has cultivated a strong following among professors, college students and hospice workers. Roughly one-third of the 30 people who attend each café are members of the congregation.

Potter marvels at the healing that takes place in each conversation. Simply by having their story heard, people find release and restoration. She was particularly moved when two college students, intending to leave at the intermission, decided to stay after hearing the story of a veteran with stage III cancer. They knew they had much more to learn from his story. The church is uniquely situated, Potter believes, to be relevant in a culture that desperately needs to deal with mortality.

“There aren’t many places left where we can be there for each other,” she said. “As we become more comfortable in talking about our death, we become more alive in our living.”

The talk outside the church

For Melissa White, the conversation about death has become something of an obsession. She spent seven years writing her Ph.D. dissertation on grief in the poetry of 19th century America.

“I’m the morbid one,” she joked, with a sober twinge. Death has been part of White’s life from nearly the beginning. She can remember sitting on her father’s lap, barely 2 years old, as he was dying from cancer. She can remember the terror of her stepsister’s unsolved murder when she was 13. Although she found solace in the Methodist church “next door” from the age of 6, White’s family moved away in her teenage years and she has not found a church home since.

“I wanted to process this [grief] in church,” she said. “But I didn’t like the theology of the churches I went to with my high school friends.”

White does, however, like the idea of making a community, particularly one that invites conversation about death. She is resolved to form her own café in Albany, New York, this year. Although she uses different language than that of the church, White has felt “the call” to lead conversations about death.

With a new gathering in the Northeast, the most post-Christian region of the country, White prefers to hold her meeting in a public library. In fact, the majority of Death Cafés are secular in nature, which raises an interesting question. Might God be doing a new thing in the world beyond the church to remind the church of its foundational conviction?

Potter points to “the tsunami of baby boomers nearing end of life.” A generation trained not to trust anybody over 30 is now facing its mortality. On the flip side, millennials talk openly of the potential death of the entire species, due to unmitigated climate change. Generation X stands in the balance, rejecting the “battle against death” ideology consuming our culture but without proper tools to claim another way.

What ministry might emerge if the church fully embraced the Death Café movement and reclaimed its conviction: In life and in death we belong to God.