Building a Life of Faith. Support the Pentecost Offering..
Make A Donation Click Here >
Home › One Great Hour of Sharing 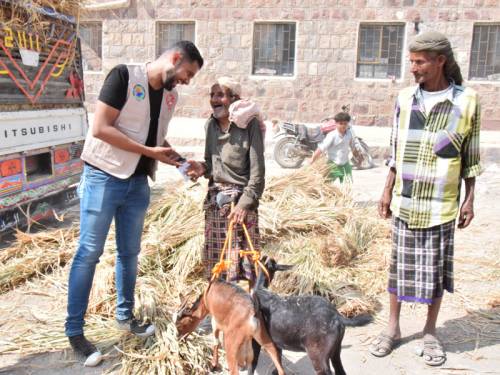 The Capirendita community in Argentina is grappling with the impact of climate change that has meant irregular rainfall patterns and prolonged droughts. Courtesy of Presbyterian Mission Agency

In the wake of the countless domestic and international crises that have only escalated in the world since COVID-19 reached the U.S. in early 2020 — among them, civil unrest, economic injustice and hunger — One Great Hour of Sharing gifts never fail to bring life and hope. From initial disaster response to ongoing community development, the three Presbyterian Church (U.S.A.) programs supported by One Great Hour of Sharing — Presbyterian Disaster Assistance, the Presbyterian Hunger Program and the Presbyterian Committee on the Self-Development of People — provide people with safety, sustenance and support.

Take for example, 13-year-old Trinity White Plume. Where the teen lives on the Pine Ridge Indian Reservation — roughly the size of the state of Connecticut — there is only one grocery store. The South Dakota county in which the reservation is located, Oglala Lakota, has the lowest per capita income in the country and consistently ranks as one of the poorest counties in the nation. During the pandemic, what was already a food desert became even more so, heightening both the challenge of food accessibility for Trinity and her family as well as the overall need for food sovereignty among the Lakota people living on Pine Ridge. Food sovereignty is a movement growing from the bottom up, from the farmers, fishers, Indigenous peoples and landless workers most impacted by global hunger and poverty. According to the U.S. Food Sovereignty Alliance, food sovereignty asserts that people must reclaim their power in the food system by rebuilding the relationships between people and the land, and between food providers and those who eat. The term was introduced in 1996 at the World Food Summit. 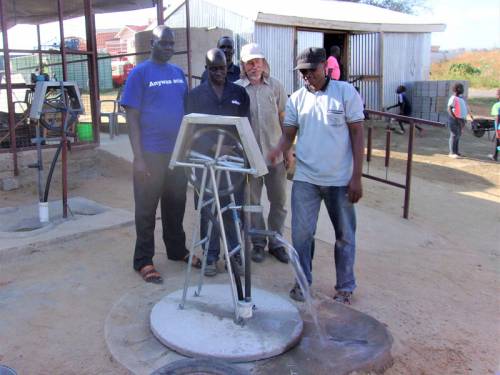 The need for money to help communities have water and food grows more pressing as the world emerges from a global pandemic. Courtesy of the Presbyterian Mission Agency

“Ever since the Standing Rock protests, we saw the need for really building our community’s strength,” said Kent Lebsock, development director for Owe Aku (Bring Back the Way). Owe Aku is a grassroots organization that champions putting its people in charge of their own food supply, nutrition, health and well-being by reclaiming ancestral wisdom and teaching Lakota history and culture. “We need to produce a generation of new leaders who are going to be able to stand up and continue this fight,” he said.

The PC(USA) partners with Owe Aku through the Presbyterian Hunger Program to do just that for young Trinity and other future Lakota leaders.

In the remote area of Bolivia near the Paraguayan-Argentine border where 34-year-old Manuel Nazario and the members of his community mostly fish for a living, their traditional livelihood is now in severe jeopardy. 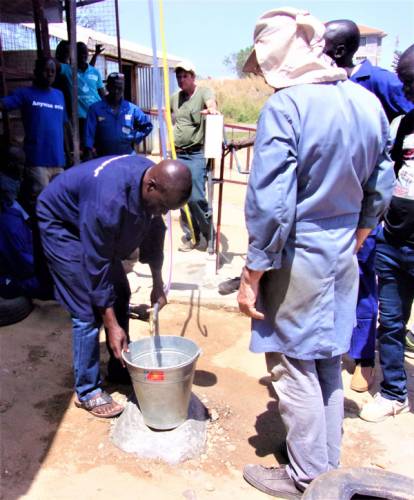 One Great Hour of Sharing gifts help communities with much-needed resources such as clean water to drink. Courtesy of the Presbyterian Mission Agency

Home to an Indigenous people known in Bolivia as the Weenhayek, also called the Wichí in Argentina, the Capirendita community is grappling with the impact of climate change that has meant irregular rainfall patterns and prolonged droughts. The community is also dealing with mining pollution creeping in from the Andean zone. As a result, Nazario and the families of Capirendita are finding their age-old ways of life and their means of economic support increasingly threatened, even as the people strive to maintain both their native language of Weenhayek and Spanish as a second language.

Although subsisting for centuries as fishers and gatherers along the banks of the Pilcomayo River in a subtropical region called the Gran Chaco, where temperatures in summer can soar to above 110 degrees, the degradation of the environment and the mounting lack of access to water threatens the people’s very survival.

A born innovator and community organizer, Nazario is now leading the families in Capirendita toward the promise of a better way, in partnership with a local organization called the Center for Regional Studies in Tarija (CERDET). Founded 31 years ago in the Tarija region of Bolivia, CERDET works in support of Indigenous communities that have been marginalized not only by other peoples in Bolivia, but also by the government. Under the leadership of Guido Cortez — a social worker in the region for five years before becoming CERDET’s executive director in 2005 — CERDET has been accompanying and teaching the Weenhayek people since 2012 to grow vegetables and fruits organically, to develop irrigation systems and to collect and store rainwater for safe drinking. 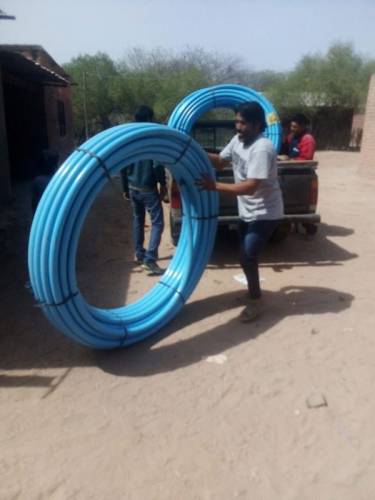 Having funds to build the infrastructure needed for the basic essentials of life — such as water — is possible through One Great Hour of Sharing gifts. Courtesy of the Presbyterian Mission Agency

When the Rev. Edwin González-Castillo, PDA’s associate for Disaster Response and Refugee Ministry – Latin America and Caribbean, first learned about CERDET’s emphasis on helping communities to become self-sufficient, he immediately knew he wanted to work with them.

“Because of CERDET’s existing partnership with the Presbyterian Hunger Program, we were able to reach out to this organization, which allowed them to come to us with their needs,” said González-Castillo, who had already been looking to expand and increase PDA’s relationships in Latin America, particularly in Bolivia, where PDA previously had no partners.

“One of the things that attracted me most about this organization is the type of work that it does,” he said. “Their desire is not just to provide things, but to develop communities, and to help those communities create capacity so that they can learn to sustain themselves. When they told us about the kind of projects they were hoping to develop in these Indigenous communities, we realized that they would be helping not only the people who are affected right now, but also the future generations in that community so that it can continue to grow and develop.”

Mama O is a wounded healer, whose moment of greatest need intersected with the critical healing and support services provided by Black Women’s Blueprint. Founded in 2008, Black Women’s Blueprint is a civil and human rights organization specifically focused on the needs of Black women and girls. Headquartered since 2010 in Brooklyn, New York, Black Women’s Blueprint currently operates a number of community-based initiatives, among them a mobile healing unit called Sistas Van that has worked mostly in Brooklyn and the Bronx. Sistas Van, which the organization created and currently manages, is a trauma-informed, survivor-centered, wheelchair-accessible and all-gender-affirming space that hosts regular healing circles for local neighborhood residents, provides comprehensive individual counseling services and fills the need for support services across the broad spectrum of the sexual and reproductive health concerns of Black women and girls. 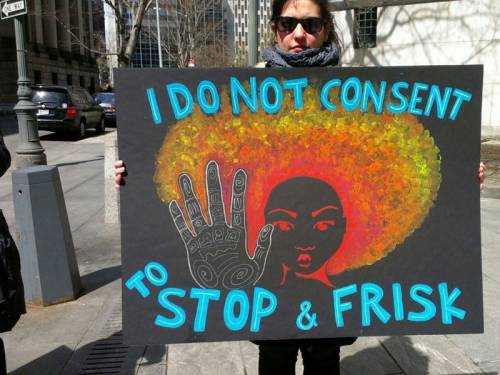 Gifts to One Great Hour of Sharing are helping Black Women’s Blueprint in its vital and singular mission to take action on economic justice issues and other forms of oppression against Black women and girls, provide tools for social justice organizing and deliver educational resources and support services to women like Mama O, who at 65 years of age, is among the eldest survivors of sexual violence in the organization. And now, she’s returning the gift.

Despite facing not only the lifelong physical, emotional and spiritual trauma that results from sexual violence, but also the impact of cancer and a host of other health concerns that ravage her body, Mama O continues to show up at — and for — Black Women’s Blueprint as a pillar of strength for other survivors, both young and old.

“Through all of Mama O’s ups and downs, she has continued to contribute creative healing arts and spiritual intercessory prayer on behalf of our survivor communities, carrying us through transitions, challenges and triumphs,” said Sevonna M. Brown, the organization’s associate executive director.

Because Mama O is a gifted craftswoman, Black Women’s Blueprint was also able to meet her and other women’s need for a space where craftswomen can work, showcase and sell their traditional and contemporary crafts that include pottery, jewelry, quilts and dolls. But above all, Mama O is a survivor who uses her art to heal both herself and other members of the community.

“It is precisely because of what Black Women’s Blueprint is doing in the community to address the specific needs of Black women and girls that we were attracted to their work,” said the Rev. Alonzo Johnson, coordinator for the Presbyterian Committee on the Self-Development of People, the organization’s partner. “One of the powerful things for us is that they are incredibly tactile. They are hands-on in the street, lifting up issues that we in the church are not talking about. These are folks that recognize those issues.”

Whether in Pine Ridge, Capirendita, Brooklyn or other communities across the U.S. and around the world, Presbyterians and their partner organizations are not only meeting immediate needs, but are working toward lasting, systemic change.

Each gift to One Great Hour of Sharing — which is traditionally collected by congregations on Palm Sunday or Easter — supports efforts to relieve hunger through the Presbyterian Hunger Program, promote development through the Presbyterian Committee on the Self-Development of People, and assist in areas of disaster through Presbyterian Disaster Assistance. Wherever in the world they are directed, gifts to One Great Hour of Sharing are helping Presbyterians respond boldly to the Matthew 25 invitation to serve the least of these and, in so doing, further the love and justice of Jesus Christ.

Learn more about the One Great Hour of Sharing offering.