“Life’s most persistent and urgent question is: What are you doing for others?” said Charlotte Hall. It’s a question the elder and chair of the outreach committee of Swarthmore Presbyterian Church doesn’t ask alone. Located in a suburb outside of Philadelphia, the 675-member church is constantly seeking ways to engage with its community. Among those ways is taking seriously the call to serve that marks the national celebration of Martin Luther King Jr.’s birthday.

The Rev. Dr. Martin Luther King Jr. was born on January 15, 1929. In 1983, legislation was signed to make his birthday a federal holiday. Three years later, in January 1986, Americans first observed what would become known as “MLK Day.” Then, in 1994, Congress designated the federal holiday as a national Day of Service and charged AmeriCorps, a national nonprofit that sends volunteers to areas of need, with leading this effort.

Observed every January on the third Monday of the month, the Martin Luther King Jr. Day of Service is the only federal holiday that has a call to action focusing on building beloved communities from coast to coast. It was King who, in fact, popularized the concept of the “beloved community,” explaining that economic equity and social justice are the twin pillars of a healthy society. At its heart, the idea of the beloved community is simply this: We share the wealth of the Earth with all so there is human decency for all and no hunger, poverty, violence or homelessness for anybody.

“‘What are we doing for others?’ That is what the Rev. Dr. Martin Luther King Jr. asked,” said Hall. “That is what I try to do. It is also the motto of our outreach work. Our people are looking for opportunities to serve, and our MLK Day of Service involves the whole church.”

Swarthmore Presbyterian, a historic church in a college town, has been observing the MLK Day of Service for several years. Led by the Rev. Sarah Searight, the congregation has reached beyond its town’s perimeters, reaching out into neighboring Chester. One of the oldest cities in the country, Chester, while vibrant in some ways, still suffers from all the problems of post-industrialization, characterized by pollution and high poverty.

For Searight, the MLK Day of Service is about “intentional partnerships and meaningful relationships that allow shared transformation to happen.” In addition, it engages youth and is multigenerational. And it all begins when Swarthmore’s outreach committee asks partners what they need. “We do not want to add a project that becomes a burden,” said Searight.

On the 2019 MLK Day of Service, church volunteers did minor repairs to the main center of Family Promise, one of their partners, at their request. Family Promise keeps families together by providing transitional housing and services to unhoused families. In 2020, Swarthmore Presbyterian met the needs of two other long-term partners: Hebrew Immigrant Aid Society (HIAS) and Frederick Douglass Christian School. Partnering with the HIAS Welcome Ministry, all the items HIAS requested were donated by congregants before the MLK Day of Service. Then, on the morning of the federal holiday, the donated items were assembled into gift baskets. In the afternoon, volunteers delivered the baskets to refugee families.

While the congregation is gearing up for 2022, Hall still remembers vividly the 2020 MLK Day of Service. She remembers not only the overwhelming and “incredibly generous” response from the congregation, but also the “complicated logistics” and delivering her own basket to a family.

Volunteers who had signed up to deliver the welcome gift baskets to refugee families received their phone numbers. Hall tried calling her family, but there was no response. She and her husband, Robert, decided to drive to the home. They found the residence on a tiny street in South Philadelphia. An 11-year-old boy answered the door. He was with his grandma, who could not speak English, Hall recalled, and his father was at work on the federal holiday. There was no mother in sight. The experience, said Hall, was humbling.

The second project that volunteers organized was for the library of the Frederick Douglass Christian School. Like HIAS, the school is also a longtime mission partner of Swarthmore Presbyterian. Joyce Van Ravenswaay, one of the congregants who volunteers there regularly, noticed that the books students wanted couldn’t often be found. On the MLK Day of Service, volunteers categorized and shelved the books neatly. Now students can find the books easily and read them, too. 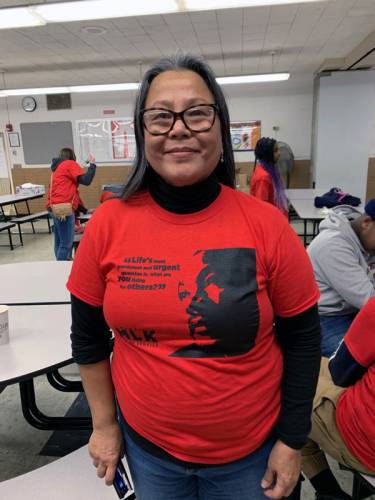 Swarthmore Presbyterian has found that partnering with others and listening to their needs are key factors for a successful MLK Day of Service. It also helps if the church is located at the epicenter of the community and has a long tradition of hunger ministries. That’s what the pastor and congregants of Bloomfield Presbyterian Church on the Green in Bloomfield, New Jersey, discovered.

Dana Moore and Norm Sutaria are the co-chairs of the Bloomfield MLK Day of Service Committee. But the Rev. Ruth Boling, pastor of the “Church on the Green,” as Bloomfield Presbyterian is referred to locally, points out that their MLK Day of Service task is not just for a day — it is for an “extended, far longer, and needed time.”

This year, in 2022, Bloomfield, New Jersey, will be celebrating its 8th annual MLK Day of Service. Councilwoman Wartyna (Nina) Davis, who started the Bloomfield MLK Day of Service, reached out to the historic Church on the Green and included them as partners from the very beginning.

“Church on the Green is centrally located, and to have this Presbyterian church engaged is a very useful blessing,” said Moore. Boling also shared, “It is a blessing for our church that Councilwoman Davis started an MLK Day of Service and then actively collaborated to include us and so many others.” 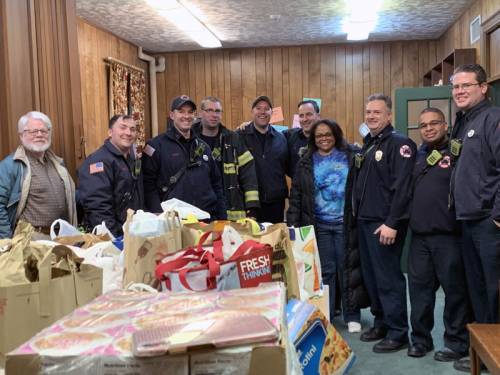 A small congregation of 100 members with large buildings and land, Church on the Green is not able to do a lot on its own. “But we are able to join a larger group that is aligned with our goals,” said Boling.

For more than 40 years, the Church on the Green has met the needs of its community through hunger ministries and a food pantry. During the height of the pandemic, though, the need exploded ten-fold. Thanks to the partnership with the Bloomfield MLK Day of Service Committee, the church received truckloads of food from local and regional businesses, such as the grocery chain Foodtown, and the food pantry remained stocked. The timing too was perfect. Food donations, which peak between Thanksgiving and Christmas, dry up in January just as winter is settling in.

To meet the pandemic safety needs in 2021, Drive ’n Drop recycling bins were strategically placed for donations. Besides the food pantry in the Church on the Green, Bloomfield College, a local Presbyterian college, pitches in as well. Both Presbyterian groups provide volunteers and participate in the MLK Day of Service celebration. Held at a local Baptist church, the celebration is a mix of worship and a student awards ceremony, which politicians attend.

In addition to feeding bodies, souls were fed as well in 2021 with an MLK Day of Service project called “Senior Smiles,” which engaged 15 volunteers who reached out to seniors by phone, bringing some comfort to their pandemic isolation and alienation. The Church on the Green’s MLK Day of Service Committee began its planning in the fall and shared their areas of focus for 2022 will be food drives, care kits, senior citizens and — a new ministry area to explore — women’s reproductive justice. Just like they did in 2021, the church will continue to offer multigenerational, multiplatform, virtual and in-person opportunities to serve for an extended period around the MLK Day of Service.

In 2017, Hopewell Presbyterian Church in Hopewell, New Jersey, became the host for a youth-led MLK Day of Service. The three young people who led the day were seeking to engage the community by living out the ideals of Martin Luther King Jr.’s beloved community. Supported by the congregants of Hopewell Presbyterian, one youth-led MLK Day of Service became an annual event which, within in three years, has inspired more ways for teens to become involved where they live.

According to Hopewell’s pastor, the Rev. Melissa Martin, the church recently created the “Hopewell Youth Collective.” Inspired by the teens themselves, the youth-led organization welcomes all the churches in the community. “We are excited to support kids who might not have a church family as they seek to love and care for their community,” said Martin.

Deborah Jodrey, who joined Hopewell Presbyterian in the summer of 2021 as its director of youth outreach, recently met a youth and his mother who were excited about the collective. Many teens, she said, are glad to “be in a group of people in the community” and to have the opportunity to build authentic relationships that the collective offers. The first meeting of the collective was held this past September with 14 teens showing up.

Jodrey, a recent graduate of Princeton Theological Seminary (MDiv 2020 and MA in Christian Education and Formation) is excited about what the future holds. She is passionate about supporting young people in the community, empowering them to connect and providing creative opportunities for them to lead.

As providence would have it, Hopewell Borough has a long tradition of collaborative work among different denominations. In the 1960s, the Hopewell Council of Churches was formed by five congregations: Hopewell Presbyterian, the Catholic parish, two Baptist churches and a United Methodist congregation. The council meets monthly, promoting community outreach and spiritual opportunities for young and old. “People don’t feel territorial, but work together,” said Jodrey, who noted that the topics that have emerged as being of interest to youth are racial justice, environmental justice, economic equality and mental health.

“Hopewell has a really amazing history of elevating youth leadership in the community,” said Martin, who looks forward to seeing what the teens will plan for their 2022 MLK Day of Service.

Anita Coleman is a consultant and founder of the Anti-racism Digital Library. Learn more at endracism.info

A Prayer for the MLK Day of Service

Here is an adaptation of a prayer written by the Rev. Sarah Searight for Swarthmore Presbyterian Church’s 2019 MLK Day of Service.

On this morning, O God, we are here. We are here to give thanks for the life of the Rev. Dr. Martin Luther King Jr., your servant of peace, your prophet of hard truths and your minister of Gospel foolishness, who still calls us to pay attention to the ways you make yourself known among us and the ways we are still so separate.

For you, O God, are the good neighbor, the one who is in us, and we are in you. You are the one who stops at every dangerous roadside and for every suspicious face we’d rather just walk on by. You urge us instead to stop, for the agony of our neighbor diminishes us, and her salvation binds us together.

So on this day, when we go out to serve our neighbors — our homeless neighbors here in [add your location] and our new neighbors who have found refuge in this place — work in us the strength to love beyond what we know is possible and the courage to act with mercy. For that is what we want for ourselves, is it not?

Then let it also be what we want for our neighbors, no matter where or in what situation we come to know them. Let us be changed because we know them, and let us all be transformed in your grace, to the glory of your kingdom. Amen.