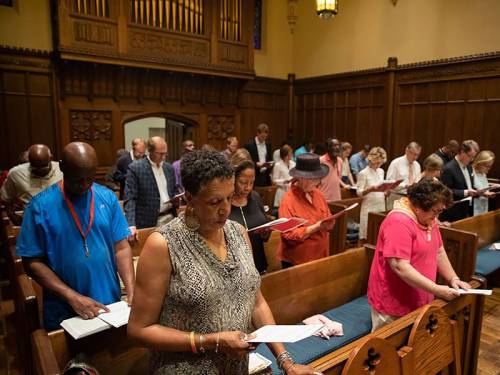 The Epiphany Project, which serves as an incubator for creative business models, is connecting the congregation of First Presbyterian Church of Atlanta with the needs in the community. Members and friends offer their talents to guide entrepreneurs in launching businesses that will make Atlanta a more just city. Courtesy of First Presbyterian Church of Atlanta

First Presbyterian Church of Atlanta wanted to reshape its ministries. Standing in the heart of the city since 1848, becoming the first Presbyterian church to lay roots in Atlanta, the congregation has had a long history of community involvement, from serving breakfasts to the homeless every Sunday to providing safe housing to women, to name a few. Still, it was time to think differently, go further and create ministries that would empower people, ministries that would “walk alongside the community,” says the Rev. Rebekah LeMon, executive pastor.

“We knew something big was possible, but we got stuck as to what it would be,” she said of the discernment process that began in 2017 for the church’s “what next.” Many innovative ideas were brought to the table, such as running a restaurant in the community or acquiring a bus to help others with transportation. LeMon says they were good ideas, but when the congregation thought through them, it didn’t make sense for the church to own these things.

It was then that a member of First Presbyterian, Ellen Adair Wyche, suggested what a Houston church was doing: Rather than creating a new church ministry, have the church become an incubator, providing guidance and funding to entrepreneurs who have business models that would lift up Atlanta’s residents.

Along with senior pastor the Rev. Dr. Tony Sundermeier,  LeMon was intrigued.

“By serving as an incubator for ideas, we can become a force for economic empowerment in the community,” LeMon said, without having the church “run all things.”

Another plus that excited First Presbyterian’s leadership was that being an incubator for social causes would allow its members — including lawyers, public speakers and financial experts — to use their talents for God’s work beyond the church walls. The idea was such an eye-opener, revealing how First Presbyterian could become a stronger partner with its community, that it was named the Epiphany Project.

“The Epiphany Project expanded our definition of mission and ministry,” Sundermeier said. “It’s connecting our members’ skills and passions in ways that we never experienced before. The thought that someone could use their professional acumen beyond a committee meeting to promote gospel-motivated social change is inspiring.”

The Epiphany Project was launched in fall 2018, with a call for applications to the social entrepreneurs in the community. The church received 88 applications, and 22 finalists were selected to receive hands-on business coaching from experienced mentors recruited from First Presbyterian’s membership. The coaching helped to refine the business ideas and models. In February 2019, after weeks of working with coaches, the finalists then pitched their refined venture ideas to a panel of judges. The five ventures selected to receive funding included initiatives targeting some of Atlanta’s most pressing social needs: a home-sharing model to increase the supply of affordable housing; job training in the automotive industry for at-risk young men; a coffeehouse that provides work for refugees; a mobile app to enable more successful court outcomes for thousands of low-income tenants facing eviction each year; and an initiative to provide more healthy meals for seniors.

LeMon says the Epiphany Project has had many “aha” moments for the congregation, reminding them every step of the way of how big God is.

“When we began reading applications, it was like an epiphany … we in the church began learning about needs that we didn’t even know existed,” LeMon said. “We learned our local Meals on Wheels lost much-needed revenue. We had our eyes opened to what people go through when evicted from their homes.”

The Epiphany Project also revealed to the congregation that ministry “doesn’t stop with the budget,” LeMon says. When the idea was first brought up, there were no extra funds earmarked for the social venture grants. As the church was figuring that part out, a film producer approached them. LeMon says that was not unusual, as the historic building is often sought after by filmmakers. What was unusual is that First Presbyterian said “yes” to the film crew using its location, as the film honored the sacred space of the church. After two weeks of filming, the church had a $72,000 check in its hand — money for the Epiphany Project, LeMon says. It didn’t stop there. Shortly after, a donor gave $30,000 to the incubator project. And when the congregation was asked to give to Epiphany as the Spirit led, “$150,000 more came in,” LeMon says.

That money is currently being dispersed to the five 2019 Epiphany Project recipients, LeMon says, noting that money for the 2020 Epiphany grants will come from savings in operational costs at the church. The church also plans to seek community partnerships for future funding. A call for 2020 Epiphany Project applications began in early January.

“We grew in our discipleship, and we imagined new ways to be in partnership with the change agents of our city,” he said. “By connecting with social entrepreneurs who share our values, we are able to participate in God’s mission for Atlanta in a much more impactful way than if we were on our own.”