The Rev. Dr. M. Craig Barnes says he now loves the seminary even more than when he began as president nine years ago 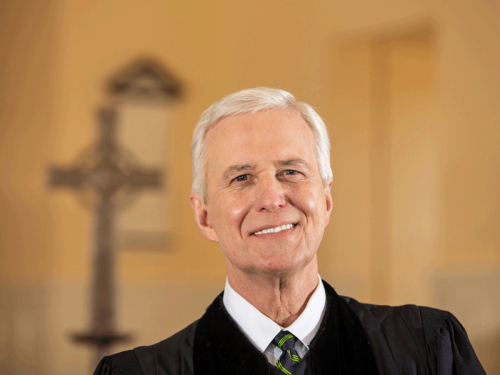 PRINCETON, New Jersey — The Rev. Dr. M. Craig Barnes, seventh president of Princeton Theological Seminary, has announced his intention to retire in 2023. Barnes will serve until a new president is named and assumes office, no later than June 2023.

The board of trustees elected a presidential search committee at its January meeting, and this group, which includes representatives from the faculty and student body, will soon begin its work.

In a letter to the seminary community, Barnes said, “Princeton Theological Seminary was one of the world’s preeminent theological schools long before I arrived. It has been an incredible honor to help it navigate its way into a new day of service to a changing church and society.”

Board of trustees chair Michael Fisch said, “Over the last nine years, President Barnes has guided the Seminary through a period of significant change. In turn, this community is now ready to embrace the future with honesty, courage, and confidence in God’s abiding love.”

Barnes began his presidency in January 2013. In his nine years as president, nearly half of the current faculty has been hired, and there has been a complete revision of the curriculum. During his tenure, the racial, gender, and denominational diversity of both the student body and the faculty has significantly grown. He led the seminary through a journey of confession and repentance of the school’s historical connections to slavery, resulting in the report “Princeton Seminary and Slavery,” published in October 2018. This report and extensive community conversation surrounding it resulted in a multi-year action plan approved in 2019 by the board of trustees with more than 20 initiatives designed to spark meaningful and lasting change, ranging from increased student financial assistance to curriculum changes to ensuring every member of the community understands its history.

Barnes earned his Master of Divinity degree from Princeton Seminary in 1981 and his PhD in church history from the University of Chicago in 1992.  Before becoming president of Princeton Seminary, Barnes was a chaired professor at Pittsburgh Theological Seminary while also serving as the pastor and head of staff of Shadyside Presbyterian Church. He previously served pastorates in Madison, Wisconsin, and at the National Presbyterian Church in Washington, D.C.

In his letter to the community, Barnes wrote, “When I began my service as your president, I stated often that I took this job because I love the seminary. As I approach the end of that service I know the seminary far better than when I began, and I love it even more. That’s because I keep seeing signs of God’s faithful love for our covenant community. And that never retires.”

Princeton Theological Seminary, founded in 1812, is the first seminary established by the General Assembly of the Presbyterian Church. Its mission is to educate leaders for the church of Jesus Christ worldwide. Its students and more than 11,000 graduates from all 50 states and many nations around the world serve Christ in churches, schools and universities, healthcare institutions, nonprofit agencies, initiatives for social justice, mission agencies, and the emerging ministries of the church in the 21st century.