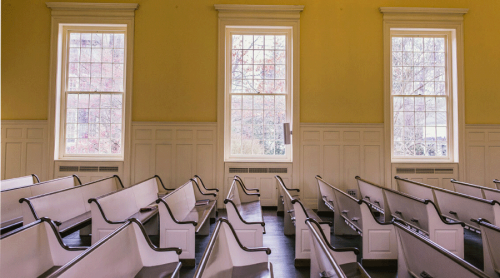 LOUISVILLE — On Tuesday, Princeton Theological Seminary Board of Trustees voted unanimously to disassociate the name of Samuel Miller from the seminary’s chapel, which will now be known as the Seminary Chapel.

According to the seminary’s president, the Rev. Dr. M. Craig Barnes, trustees also voted to create a task force charged with developing guiding principles and decision-making rubrics for naming, renaming and conferring honor in buildings and spaces. Students, faculty and alumni will comprise the task force.

Barnes said Tuesday’s decision continues trustees’ commitment “to the ongoing work of confession and repentance that was part of the [seminary’s] historical audit on slavery. As a community, we are committed not only to keeping the legacy of our history before us, but also to continuing to make steps towards repair.”

Barnes said the Board of Trustees “joins me in being grateful for the prophetic voices of our students, especially the leadership of the Association of Black Seminarians. It has been a moving testimony of covenant community to see how diverse students united to lament the pain of having to worship in a chapel named for a slaveholder, opponent of abolitionism, and advocate for the American Colonization Society, which sought to send freed Blacks to Africa.”

As a PTS founder, Miller “is, and always will be, a part of Princeton Theological Seminary’s story,” Barnes said. “Yet the Board chose to disassociate his name from a place of tribute in the chapel, where the community gathers into the one body of Jesus Christ.”

Miller was the second professor to teach at Princeton Theological Seminary, serving there from 1813-1849. He died Jan. 7, 1850, in Princeton.

“The chapel is the spiritual heart of our community,” Barnes said. “Its welcome must be as wide and healing as God’s love for us. May God continue to guide us as we seek to worship in spirit and in truth.”

According to a statement from the Board of Trustees, the measures taken in response to the historical audit on slavery include:

“As we undertake these important reforms,” the trustees said, “we do so with humility, modesty, and thoughtfulness, seeking to balance our responsibility to past generations with our obligation to those who will follow us.”

Learn more about Tuesday’s announcement by clicking here and here.