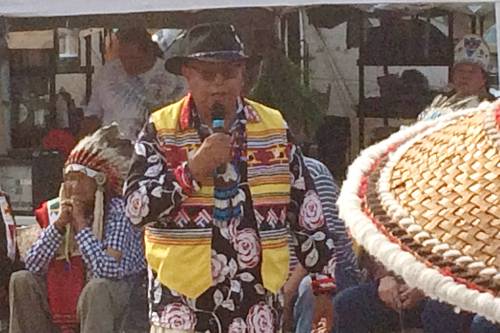 Tribal leaders from around the United States speak to those gathered to protest the construction of the Dakota Access Pipeline near the Standing Rock Sioux reservation. (Photo by Paul Henschen)

LOUISVILLE – As the protest against the Dakota Access Pipeline continues near Cannon Ball, North Dakota, the Earth Care Team from the Presbytery of Northern Plains delivered supplies late last week to sustain those demanding an end to the pipeline’s construction. Representatives from the Standing Rock Sioux tribe have gathered near the construction site since April, hoping to stop the construction of the 1,170 mile pipeline scheduled to move crude oil from the Bakken oil fields in western North Dakota to refinery facilities in Illinois.

The Rev. Paul Henschen, pastor at the Presbyterian-United Methodist in Ellendale, North Dakota and a member of the presbytery’s Earth Care steering committee, visited the protest’s Sacred Stone Camp on the banks of the Cannon Ball River, bringing 40 gallons of water, 10 bags of apples and 20 boxes of granola bars to the thousands gathered in prayer and protest. He said, although all donations are appreciated, the presbytery’s contribution “paled in comparison to what was already there—in fact, an eighteen-wheel truck of supplies had just arrived.”

Henschen made the trip as a sign of solidarity with environmental mandates of the Presbyterian Church (U.S.A.) and was able to see the arrival of the totem pole sent to North Dakota by Northwest tribes in addition to hearing speeches from tribal elders from around the nation who had joined the action.

“They talked of how the present white-dominated society was harming the earth and that this pipeline was just another in a long history of acts of desecration of the Creator’s world,” he said. “They declared that this campsite was a place founded on prayer, and that no drugs or weapons were allowed. They spoke of how their people had been on this land from the beginning, and how white society had tried to get rid of them, but that they, the Indigenous People, would still be there in the end. They said that they would pray for what was happening at Standing Rock, and that they would especially pray for the whites, because they would need it when they came before the Creator and had to answer for what they have done to the earth.” 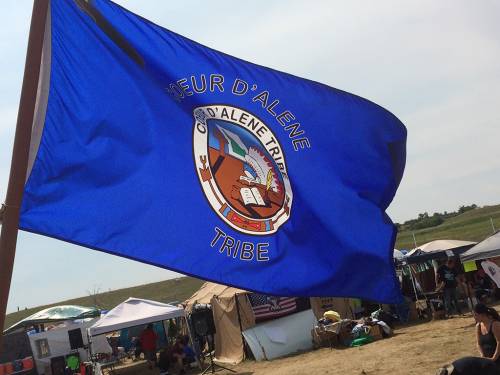 Tribes from around the United States have assembled on the banks of the Cannon Ball River in support of the Standing Rock Sioux protest . (Photo by Paul Henschen)

In 2004, the PC(USA) General Assembly passed a policy “[recognizing] that regional issues of extraction, pollution, transportation, and export have interstate, national, and global implications, both for environmental justice concerns and for global climate disruption/change.” Since 1995, the PC(USA) has also had policy that recognizes that “people of color have a history of disempowerment due to racism and its socioeconomic consequences.”

“When environmental and energy development is being considered, we are called to examine proposals with ‘eco-justice norms’ of sustainability, participation, sufficiency, and solidarity—as well as energy guidelines of equity, risk, and cost—including social and environmental costs,” said Rebecca Barnes, associate for Environmental Ministries at the PC(USA). “The Dakota Access pipeline protests raise multiple concerns that align with the concerns voiced in these PC(USA) policies and we stand in solidarity with local people who are concerned for the possible contamination of drinking water and the disruption of sacred sites.”

An August 26 statement issued by the Rev. Dr. J. Herbert Nelson, II, Stated Clerk of the Presbyterian Church (U.S.A.), in conjunction with the Rev. Irvin Porter, associate in the Office of Native American Intercultural Congregational Support, added the denominations support to the Standing Rock action. They said the church “is becoming more aware of the struggles that Native American Presbyterians and all Native Americans have faced in the past and are dealing with today.”

The statement also questioned the use of roadblocks ordered by North Dakota governor Jack Dalrymple and the forceful tactics of private security guards, which included the use of dogs and pepper spray, saying these methods “are unfortunate and unnecessary, and only raise the already high tension between the state and Native protesters.”

A federal judge is expected to rule tomorrow, September 9, on the July 27 injunction filed by Earthjustice on behalf of the Standing Rock Sioux Tribe against the U.S. Army Corps of Engineers, asking construction of the pipeline be halted. The tribe and environmentalists assert the pipeline, which is set to run under the Missouri River upstream of reservation lands, endangers sacred sites and presents a threat to the tribe’s primary water supply should the line rupture or leak.

The Synod of Lakes and Prairies has set up an account to receive donations to help the Standing Rock Sioux tribe’s protest efforts against the Dakota Access Pipeline. Please send checks to: