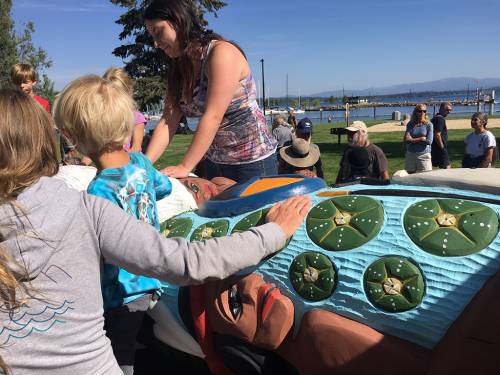 Residents of Sandpoint, Idaho get see and touch the 22-foot totem pole during a gathering on Sunday. (Photo by Susan Drumheller)

LOUISVILLE – For the Lummi Nation, proposed fossil fuel development, transport and export of coal and oil could drastically impact their way of life. The Native American tribe, located in western Washington State has been battling proposed terminals, oil and coal trains, and pipelines arguing that such projects create a tremendous environmental threat to their homeland and the region.

On August 23, the group launched a 19-day, 5,000-mile journey across the western U.S. and Canada carrying a 22-foot long western red cedar totem pole, carved and donated by Master Carver Jewell Praying Wolf James of the Lummi Nation and the House of Tears Carvers. Organizers want to bring attention to the proposed terminals and transportation plans and the threat they bring to native communities in the northwest region.

“We need to be heard as many people and one voice. We need to let them know they cannot in the name of profits do this to the people, water, land and future generations,” said James in a press release. “We will never give up. They must not pass.”

In May, the activists scored a major victory when the Army Corps of Engineers denied a permit for the proposed Gateway Pacific Terminal Bulk Dry Goods Shipping Facility at Cherry Point, Washington. The decision to block the coal export terminal was based on the potential impact on the Lummi Nation’s treaty fishing rights. Lummi and other tribes argued the terminal would dramatically increase fossil fuel exports from Washington State and British Columbia, adding that the transportation, storage and shipment of these products would create a “major threat to environmental and community health to the way of life of the Native peoples in the region.”

The Rev. Holly Hallman, Presbyterian teaching elder in the Seattle area, was present when the tour began in Seattle. Last year, she delivered a letter from the Presbyterian Church (U.S.A.) to the corps on behalf of the Lummi Nation and Northwest native tribes.

“The Lummi are really focused on using tribal connections to bring awareness to the terrible degradation that is being done to our environment and they make it a spiritual issue. It’s very touching what they are doing,” said Hallman. “People are drawn to this because of the focused spirituality. The pole is a storytelling tool. It’s a piece of wood until you put your hands on it.” 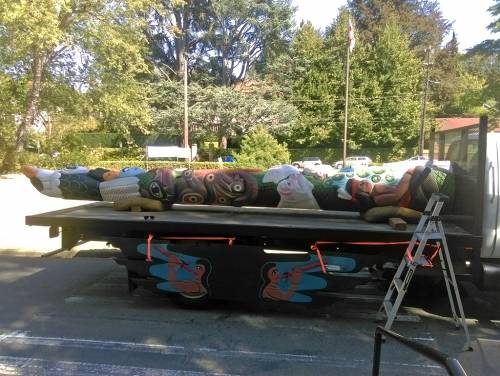 The 22-foot western red cedar totem pole rests on a flatbed truck as it travels 5,000 miles to Winnipeg, Manitoba. (Photo by Holly Hallman)

The totem pole includes a bald eagle with wings spread across the top with a Medicine Wheel on its chest. Below is a buffalo skull with a wolf and coyote. At the bottom is an Indian Chief with a war bonnet facing a Medicine Man and sharing a peace pipe.

While the Corps of Engineers has denied the permit, SSA Marine has said it will appeal the decision. Campaign organizers want to make sure the issue remains in the public eye.

On Sunday, the totem pole came to Sandpoint, Idaho, home to Gary Payton, an active member of Presbyterians for Earth Care, former steering committee member for Fossil Free PC(USA) and former coordinator for the Presbyterian Peacemaking Program. Sandpoint is a critical location on the rail network as coal from Montana and Wyoming and crude oil from both the Bakken oil fields in North Dakota and tar sands from Alberta transit the town en route to terminals and refineries on the West Coast.

“It still comes through my community and has a potentially dangerous impact on us as the coal trains roll on to Vancouver, British Columbia to be shipped to coal fired power plants in east Asia,” he said. “And, the Union Pacific oil train that derailed along the Columbia Gorge in Mosier, Oregon back in June, had come through Sandpoint just hours before.”

Payton was asked to speak during Sunday’s ceremony.

“Everyone gathered here recognizes that climate change is the great moral and spiritual challenge of our time. And, we know that challenge is caused by our reckless exploitation and consumption of fossil fuels that destroy our atmosphere and oceans,” he told the crowd. “It is right then that faith community members stand in solidarity with the Lummi Nation on coal and oil issues and with other tribes and communities which seek to protect our good creation.”

Payton said the faith community, environmental organizations, cities and towns along the route of proposed fossil fuel infrastructure projects are a part of the “Thin Green Line”, a multi-faceted opposition to turning the Pacific northwest into a “funnel for the movement of polluting fossil fuels.” He said there were six proposed coal export terminals in 2011 and 2012 in Washington and Oregon and that five have been defeated, with only one still undergoing environmental review.

“We are thankful for the presence of the totem pole and offer our encouragement to the Lummi men and women and thank them for their ongoing battle with respect to fossil fuel infrastructure and movement,” he said.

The totem pole and its companions left Sandpoint to join the Standing Rock Sioux demonstration ongoing in North Dakota against the construction of a crude oil pipeline along the northern border of the tribe’s reservation lands. The pole’s final destination will be Winnipeg, Manitoba.