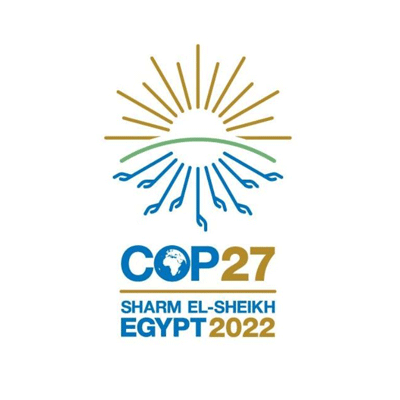 LOUISVILLE — Presbyterians will be among those traveling to Egypt for a major global climate conference that could lead to world leaders taking collective action on critical topics, such as reducing greenhouse gas emissions and perhaps compensating developing countries burdened by climate-related loss and damage.

An eight-member delegation from PC(USA) will be in Sharm El Sheikh for COP27, which also is known as the 27th Conference of the Parties to the United Nations Framework Convention on Climate Change.

During the annual conference, which lasts about two weeks, world leaders will discuss ways to address the global climate crisis as the world continues to be rocked by disasters, from hurricanes Ian and Fiona to catastrophic flooding in places like Pakistan and Nigeria.

“Faced with a growing energy crisis, record greenhouse gas concentrations, and increasing extreme weather events, COP27 seeks renewed solidarity between countries to deliver on the landmark Paris Agreement, for people and the planet,” according to the United Nations.

COP27 and related events are expected to attract many thousands of people, including heads of state and governments, members of civil society, businesses, the scientific community, media and activists (But not Greta Thunberg), from almost every country on Earth. 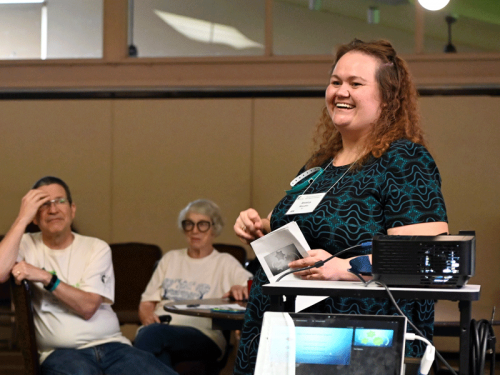 Jessica Maudlin is Associate for Sustainable Living and Earth Care Concerns in the Presbyterian Hunger Program. (Photo by Rich Copley)

“The PC(USA) joins faith groups showing up physically in Egypt to ensure that vulnerable voices are heard at side events, meditations, interventions, and actions to raise ambition and raise awareness for our common home,” Jessica Maudlin, Associate for Sustainable Living and Earth Care Concerns for PHP, noted on the Eco-Justice Journey blog. “We will also be lifting up opportunities to pray and join in some COP27 events virtually.”

Because of the importance of this issue to young people, as well as the church in general, Victoria Alexander and Lucy McDermott, who are Young Adult Volunteers from PMUN and OPW respectively, are posting graphics and other material on social media throughout the conference.

“The future of our climate is the future of our young adults,” Alexander said. “They are going to have to live with the benefits or consequences of the actions we take now to address climate change and seek a just future for all. So many young adults all around the world are full of creative ideas and energy to bring to the fight for climate justice and it is paramount that our church and the broader global community recognize and embrace young adult perspectives during COP and beyond.” 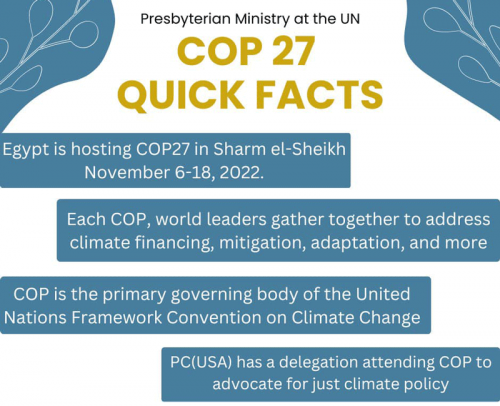 Maudlin, who’s traveling to COP27 for the first time, will use the experience to inform her work in PHP, which includes connecting with Earth Care Congregations, and as a member of PMA’s climate roundtable. “As people of faith and just as human beings, we have to do some serious things to reduce our carbon emissions. We have to figure out how to do a better job of utilizing natural solutions that are available to us and do everything that we can to be good stewards of the planet that God gave us, so that all God’s creatures can thrive on the planet that we’ve been given.”

During COP26 in Glasgow, Scotland, all countries agreed to revisit and strengthen their climate plans. But few nations have submitted updated plans to the UN, according to UN News.

Rheem, coordinator of PMUN, noted that there is an urgency to this year’s proceedings because the impact of global warming is already being felt.

“All evidence indicates that climate change is already here, not something that will happen in the future, Rheem said. “We are dealing with climate change now. Sadly, it’s disproportionately affecting the most vulnerable communities, people in marginalized communities, Indigenous peoples, communities of color, and the developing countries and small island nations — those who did not create this crisis in the first place.”

During a pre-COP27 event last month, UN Secretary General António Guterres called for “game-changing, quantum level compromise between developed and emerging economies” to show that climate action is truly the top global priority. He also expressed frustration at the pace of change so far.

“The actions of the wealthiest developed and emerging economies simply don’t add up,” he said. “Taken together, current pledges and policies are shutting the door on our chance to limit global temperature rise to 2 degrees Celsius, let alone meet the 1.5-degree goal.” 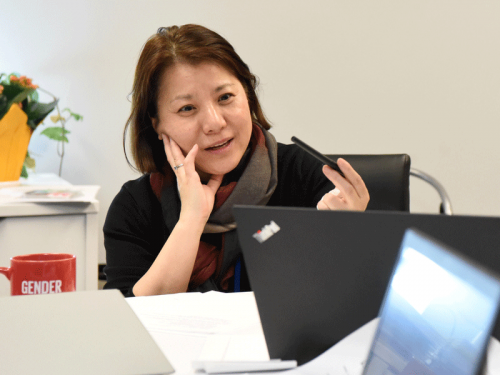 Sue Rheem is coordinator of the Presbyterian Ministry at the United Nations. (Photo by Rich Copley)

Similarly, Rheem said, “the goal to reach carbon neutrality by 2050 and keep temperature rise to 1.5C by the end of the century is fast slipping away. The developed nations, the G20 countries that emit 80% of the greenhouse gases, must do more, keep the promises they’ve already made and raise their ambitions in mitigation and adaptation efforts, and provide funding in grants, not loans, to the developing countries for loss and damage that they are suffering, to compensate victims of climate change and for them to adapt to this new reality.”

She went on to say, “That is why our office is going to COP27 — to share the stories of the most vulnerable and to remind the negotiators of their obligation to do what is right and just, to care for God’s Creation and people now and into the future.”