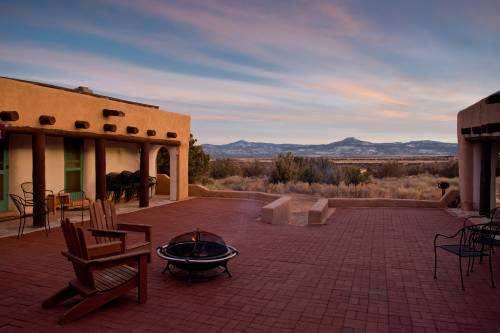 Of the three national conference centers—Ghost Ranch, Montreat, and Stony Point Center—only Stony Point is wholly owned and operated by the PMA. Montreat Conference Center is under the management of the church-related Mountain Retreat Association, which formed in 1905. Although a proposal to separately incorporate Stony Point Center was disapproved by the PMA Board in 2014, the board did adopt a series of financial milestones for it as Stony Point works toward financial self-sustainability.

After emerging from closed session, the PMAB Executive Committee approved a motion recommending the full Presbyterian Mission Agency Board consider a proposal to maximize the operational efficiency of the 21,000-acre year-round facility in northern New Mexico. The proposal, which calls for close collaboration with the Presbyterian Foundation and the Ghost Ranch Governing Board in moving Ghost Ranch toward eventual operational and financial sustainability, was authored by Ghost Ranch Governing Board.

“In accordance with our 2017-18 Mission Work Plan, the Presbyterian Mission Agency is committed to ‘inspire, equip and connect the PC(USA) in its many expressions to serve Christ,’” said Tony De La Rosa, the PMA’s interim executive director. “Ghost Ranch has been a historically important venue for Christian witness, education, and recreation for Presbyterians throughout the country. We look forward to working with the Presbyterian Foundation and National Ghost Ranch Foundation in securing a sustainable future for Ghost Ranch for generations of Presbyterians to come.”