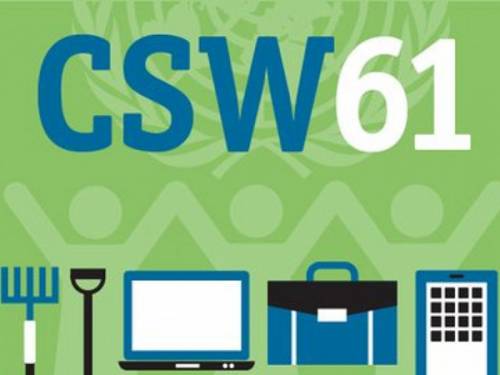 “The Presbyterian Church (U.S.A.) will bring a delegation to the commission as we have in years past,” said Ryan Smith, ministry director and representative to the U.N. “Our delegation will work with communities with whom we partner such as Ecumenical Women and Faith and Feminism. The PC(USA) will also sponsor a parallel event outside of the U.N. looking at the role of women in leadership.”

The commission met for the first time in February 1947, shortly after the United Nations was founded. All 15 government representatives were women. It is a functioning Commission of the Economic and Social Council of the U.N. and one of the oldest. It consists of 45 members: 13 from Africa, 11 from Asia, nine from Latin America/the Caribbean, eight from western Europe and other countries (including the U.S.) and four from eastern Europe. Member states are elected to four-year terms.

Until 1962, it focused on setting standards and worked to change what it believed to be discriminatory legislation and create a greater awareness of women’s issues. In 1963, the U.N. General Assembly requested the commission draft a “Declaration on the Elimination of Discrimination against Women,” which was adopted four years later.

In recent years, the commission has dedicated its annual sessions to women and girls’ access to education and full employment, empowerment of women living in rural areas and their role in poverty, and violence against women and girls.

This year’s theme is “Women’s Economic Empowerment in the Changing World of Work.” Smith says participating Presbyterians will have an opportunity to see the commission at its best.

The PC(USA) holds special consultative status at the U.N. and contributes to its agenda by attending conferences, making oral and written statements and taking part in advocacy and networking.

“The commission serves as the global norm setting forum on gender justice and women’s rights. Presbyterians who attend the commission can bring the work and outcomes home to their own communities,” Smith said. “It is so important for local communities to be connected to the work of the international commission.”