PORTLAND – Approximately 25 environmentally-focused Presbyterians took a half a day away from General Assembly business for a bus trip along the Columbia River Gorge on Wednesday. Nestled between the Oregon/Washington State border, this vast waterway is a salmon spawning ground. But pollution and the threat of new corporate development is placing the region in a state of concern.

The group heard from a number of local activists who are fighting a proposal to build a new oil refinery in nearby Vancouver, Washington. The refinery and the accompanying rail traffic are considered by many as a major catastrophe waiting to happen. 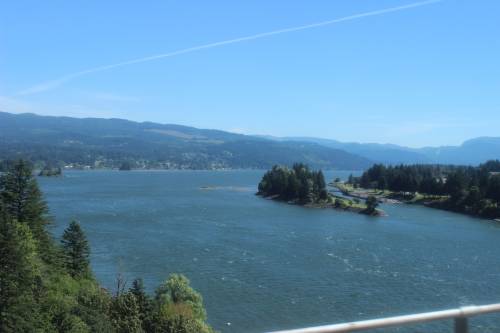 The Columbia River along the Oregon/Washington State border is a major salmon spawning ground. Residents fear a new oil refinery may threaten the habitat. Photo by Rick Jones.

The refinery would be adjacent to a newly planned community development which would include parks, shops and new homes.

“This would be the largest oil-by-rail operation in America and all of the trains would go through this community,” said Don Steinke with the Sierra Club. “A train derailment would be catastrophic.”

“An oil spill would threaten the salmon habitat and any significant spill would halt river commerce,” said Sears. “Many in Vancouver feel it would cost jobs and drive away those who live here.”

The region saw a Union Pacific train carrying crude oil derail on June 3rd. Although none of the oil made its way into the river, the derailment did send a plume of black smoke into the air forcing road closures and the evacuation of schools and homes in the area.

With that derailment fresh in everyone’s minds, the thought of a large oil-by-rail operation makes residents very nervous.

“Eighty percent of our known oil reserves need to stay in the ground. We don’t need it,” said the Rev. Richenda Fairhurst, pastor of the Camas United Methodist Church. “We care about it because it’s happening right next to us and we have to be vigilant. But everyone should care because the fight is in your hometown as well.”

Sears, Steinke and others believe the refinery and rail operation are meant to build out dependence on fossil fuels well into the next generation with a planned 360,000 barrels of crude oil a day coming from the refinery.

“If the water is too acidic, fish will die,” said Fairhurst. “We are on the edge now and we have to make a decision on what we will do.”

Steinke says in the event of a train derailment, access to those who are trapped or injured would be difficult saying ambulances would not be able to access the derailment area in Vancouver because of the track configuration.

“Those who fail to take action are showing willful ignorance. Those who have any doubt about stopping this development have not done their homework,” he said. “The more we do to stop this now, the easier it will be for our children and grandchildren.”

From Vancouver, the bus made its way through the Columbia River Gorge, surrounded by large, sculpted mountains and high waterfalls. At the Cascades Locks, four tribal groups have established fishing sights and sell what they catch to visitors who come by the museum or pass through the community. 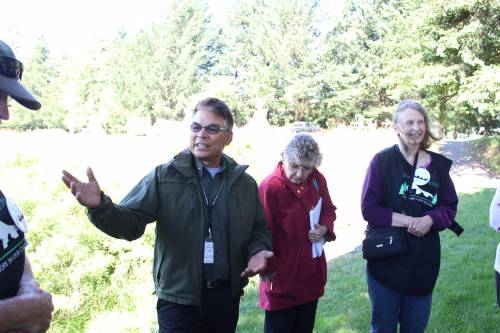 Danny Martinez, a tribal fisherman in the region worries about the impact of corporate development near the Cascades Locks. Photo by Rick Jones

Fishermen like Danny Martinez with the Warm Springs Tribe are working hard to keep out development and help maintain the region’s natural beauty.

“There are 10 million acres of land that we can hunt, fish and live on,” said Martinez. “Yet there are those who wish to commercialize here. This river and surrounding land need to be protected. I don’t want the river polluted any more than it is now. It is the fourth most polluted river in the United States.”

Martinez told the group that raw sewage is the primary pollutant in the Columbia along with the runoff of agricultural chemicals.

The final stop for the tour was lunch and a brief meeting at Menucha Retreat and Conference Center. Ryan Rittenhouse with Friends of the Columbia Gorge, briefed the group on the impact of coal dust on the grounds saying the dust from the trains is so thick it has to be shoveled, killing off vegetation around the tracks.

Rittenhouse echoed what others have said about the impact of oil-by-rail operations in the area and the growing number of oil spills in the U.S.

Rittenhouse said that doesn’t take into account the damage caused by high winds when oil is burning, adding that winds in the gorge are usually 50-70 miles an hour.

“Mosier was no accident,” he said. “We knew it was going to happen and we know it will happen again.”