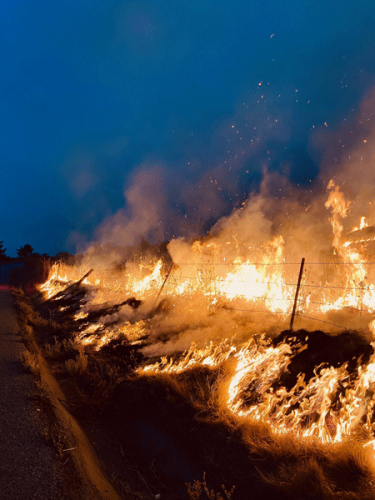 LEXINGTON, Kentucky — Presbyterian Disaster Assistance (PDA) and the Presbytery of Plains and Peaks are responding to wildfires that impacted the area between Boulder and Denver, Colorado in the last days of 2021.

More than 35,000 people were forced to leave their homes and nearly 1,000 homes were destroyed in the unseasonal fires that were driven by hurricane-force winds.

“It was just absolutely horrific,” said the Rev. Jim Kirk, PDA’s Associate for National Disaster Response. “Size wise, it was not a huge fire. But impact wise, to people, it was. It started in a residential area and greatly impacted several towns and unincorporated areas.”

Joyce Glazier, a member of PDA’s National Response Team (NRT) who lives in the Denver and Boulder area, says that 991 homes were destroyed, and more than 100 others suffered damage.

“We have a lot of folks that are displaced, and will be for some time,” said Glazier, who is not working with PDA in this situation, but with the Boulder County and Colorado VOAD (Voluntary Organizations Active in Disaster).

PDA generally does not deploy NRT members in their own areas so they are free to tend to their own needs and work with local organizations in the aftermath of disasters. But working with the NRT does give Glazier some perspective of the immediate and long-term needs following the fires. Currently, Glazier said first responders are working to meet immediate needs such as food, shelter, and emotional and spiritual care.

One of the major challenges, Glazier said, is housing. Housing was already at a premium in the Boulder area before the fires, and the loss of nearly 1,000 homes will only exacerbate that shortage.

The best way people can help, Glazier said, is financial contributions to established organizations such as Presbyterian Disaster Assistance. That allows recipients of the funds to use the money where it is most needed and often keeps money in the local economy that has been impacted by the disaster.

Click here to give to PDA’s response to Colorado wildfires

“We are beginning to talk about long-term recovery, and how we get the community involved to lead that organization, to actually oversee the rebuilding of all of these homes and the work that needs to be done to bring back the businesses that have been lost,” Glazier said.

One of the complications to cleanup and recovery is winter weather.

It was in part the absence of snow on the ground, usually present in late December, combined with a recent drought that helped the fires flourish and spread. But now, snow has fallen, and that will hamper recovery and rebuilding efforts until the spring and summer, Glazier said.

“It’s hard to find something like a wedding ring when it’s under eight inches of snow,” Glazier said.

One of the tasks PDA will likely become involved in is opening host sites in the area for volunteers who want to come help recovery over the next few years. Glazier said there are churches in the area that have served as host sites before to address issues such as flooding.

Kirk and Glazier both noted wildfires at this time of year are unusual in Colorado but “things that don’t typically happen are becoming typical.” 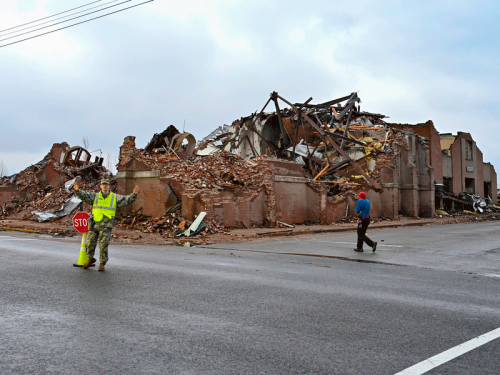 A National Guard member directs traffic in front of First Presbyterian Church of Mayfield, Kentucky, which was destroyed in a Dec. 10 tornado. (Photo by Rich Copley)

That could also be said of recent outbreaks of tornadoes and severe thunderstorms, which PDA was addressing before the Christmas and New Year’s holidays. Kirk said PDA has been in touch with presbyteries impacted by severe weather the weekend of Dec. 11, as well as subsequent storms later in the month, some of which impacted the communities, including Bowling Green and Campbellsville, Kentucky.

Kirk said initial assistance grants have been made in Kentucky and Arkansas, and PDA is exploring potential volunteer hosts sites in those areas as well. Like in Colorado, this will be a long-term recovery effort as many homes and even a Presbyterian church were destroyed in the tornado outbreak, and financial gifts to PDA will be extremely helpful. 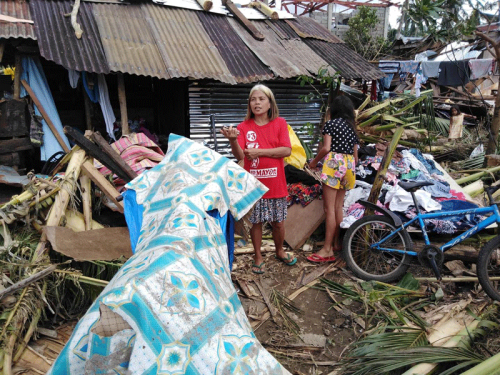 Residents work to clean up after Super Typhoon Odette struck the Philippines. (Photo by Lotlot Amora)

PDA also responded to the devastation of super typhoon Rai (Odette) in the Philippines, which struck the southern and central regions of the country impacting more than 1.8 million people and killing at least 409 people. Like the tornadoes and wildfires, Rai, which became known as Odette in the Philippines, was unusual as it was the first Category 5 typhoon to develop in December since 2016 and only the third Cat 5 in the South China Sea. It was the fifth super typhoon of the 2021 Pacific typhoon season. Presbyterian Disaster Assistance has been working with partners in the Philippines, and you can click here to contribute to PDA’s response there.