LOUISVILLE – The floodwaters are receding in West Virginia and families have begun the massive task of cleaning up following last week’s record flooding in parts of the state.  As many as 23 people are known to have died in the flooding, while hundreds of homes and businesses have been damaged or completely destroyed. 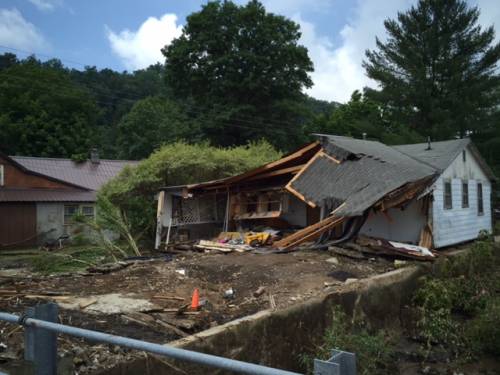 One of hundreds of homes damaged or destroyed by record flooding in West Virginia. Photo by Phillip Darby.

“I began assembling a team to respond and then I heard the situation was far worse and was asked to send as many National Response Team members as I could,” he said. “I then changed from one team to two teams of three people. I also needed to have some NRT members standing by in case more are needed.”

The first team is headed by NRT member Liz Branch. She and other members spent Monday in White Sulphur Springs along the Greenbrier River, one of the hardest hit communities.

“There are cars submerged in the river and an entire sandbar of rock has been swept downstream. Houses are in various stages of mucking out. Most houses remain while at least one has been moved off of its foundation,” said Branch. “The National Guard is clearing out debris and various volunteer organizations are in town including FEMA and the Red Cross. They are in the early stages of trying to bring some normalcy back to the town.”

“We’ve talked with a number of residents in the area. If they didn’t have a lot and lost everything, they’re toughing it out and going on saying they’re thankful to be alive,” said Branch. “The people who only saw a foot or two of water recognize that other people have had it worse. That’s their response.”

Branch said her team spent most of the day with emotional and spiritual care providers walking the neighborhoods and listening to people.

On Tuesday, the team moved on to Alderson, about 15 miles from White Sulphur Springs, another community along the Greenbrier River.

“We will continue to walk along the streets and talk with those sitting on their porches, and point them to services that are available,” said Branch. “Emergency teams are providing tetanus shots, distributing clothes and serving food to those who need them. We’re trying to be a communication link for people who are home and trying to clean up.”

The second team arrived on Monday. Both groups will continue to meet with residents and local church leaders over the coming days.

“I received a grant request for an initial response grant and have approved it,” said Turner. “It has been entered into the PC(USA) system for immediate response. These funds will make it possible for the presbytery to begin assisting with short-term recovery and with immediate needs within the impacted communities.”

For more information on PDA’s response to the flooding, click here.