Make A Donation Click Here >
Home › Iowa storm hasn’t made headlines, but PDA is there 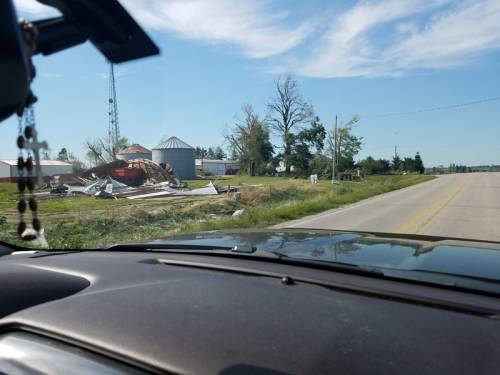 An Aug. 10 wind storm that struck a large portion of Iowa caused extensive damage to farmland. (Photo by Jessica Crane-Munoz)

LEXINGTON, Kentucky — The storm took 14 million acres or 40% of Iowa farmland, plus numerous barns, silos, and other structures. In Cedar Rapids, more than 1,000 homes have been declared uninhabitable, and most buildings have sustained some damage. People displaced wait in tents for help, while across the state, power and other utilities are still out.

All this is taking place in the midst of the COVID-19 pandemic.

“There was no warning, no prediction this was going to happen,” said Greg Smith, who was camping at a lake near Des Moines when the storm hit on Aug. 10. “It was intense and fast. I think it only lasted 10 to 15 minutes.”

The storm was a derecho: a wide, long-lived, fast-moving phenomenon characterized by damaging winds gusting to at least 58 mph. Reports of the storm, which ripped across other midwestern states such as Nebraska and Illinois, said winds were whipping at 70-to-100 mph. 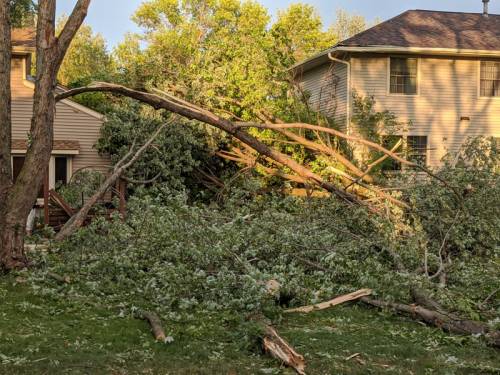 The storm has been referred to as Iowa’s Katrina, referencing its hurricane-like impact, though it has received light news coverage compared to coastal storms. When it was Iowa’s turn to declare its delegates in the Democratic National Convention Tuesday night, the people speaking from a field in Iowa took the moment to ask for help and prayers following the storm.

“It doesn’t really matter what the news is,” says Smith, a PDA National Response Team (NRT) member. “That doesn’t mean that people that are affected aren’t hurting. It just means than people need to be made aware, and PDA is very aware. We’re still involved in some communities” that stopped making the news a long time ago.

The Rev. Jim Kirk, PDA’s Associate for Disaster Response, U.S., said, “That’s not unique to PDA. Faith-based responders continue to respond to disasters that don’t bring a lot of national attention, quietly working behind the scenes. That makes me really proud of the faith community.”

While the storm impacted a broad swath of Iowans, Smith said, “disasters tend to make the poor poorer, the people who were most vulnerable even more vulnerable. … For me, disaster assistance work is a social justice ministry. The very people we’re probably going to spend the bulk of our time working with are the people in our society Jesus would want us to be focusing on.”

Smith said local churches are working on helping a substantial Latino and Congolese refugee community in Cedar Rapids that was severely impacted by the derecho.

The PC(USA) is in the process of approving four initial assistance grants for the presbyteries of Des Moines, North Central Iowa, East Iowa and Prospect Hill. In addition, multiple church damage grant requests are anticipated.

Smith says recovery from the derecho will be a long-term process, with lots of rebuilding ahead. But for now, immediate needs remain, like getting electricity to people who need it for things such as medical devices that rely on power to work, as well as restoring gas and internet so people can cook and communicate. Smith said he is seeing utility crews from all over the country in Iowa.

Due to the coronavirus pandemic, PDA is not deploying in-person response teams, and its Volunteer Host Sites are suspended for the remainder of 2020. However, if there are local Iowans willing to volunteer while observing COVID-19 regulations, PDA may be able to help them connect with a local contact in one of the impacted presbyteries.  Email PDA.CallCenter@pcusa.org to be placed on an interest list.

Usually, an NRT member would not be deployed to a disaster in their own area so that they can deal with their own recovery. But in this instance, Smith was virtually deployed in part because his local knowledge of Iowa could be helpful and he is in a leadership role with the IAVOAD (Iowa Voluntary Organizations Active in Disaster).

Being deployed to four presbyteries speaks to the breadth of the disaster, Smith says. In a virtual deployment, he is making contacts with the general presbyter or designee, finding out what the needs are and helping them connect to resources. 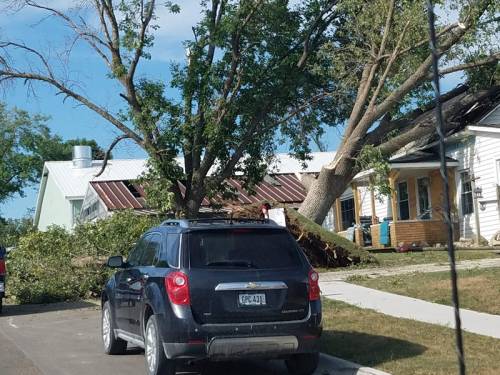 At the beginning of this week, Iowa did receive a federal disaster declaration for 27 counties and approval for $45 million of the $4 billion Gov. Kim Reynolds requested in aid. President Donald Trump visited the state on Tuesday to survey the damage.

While PDA is not deploying any in-person response at this time, due to a travel ban through 2020 for PC(USA) national staff, Presbyterians in Iowa are active in relief efforts in their communities. Kirk notes that NRT member the Rev. Kristin Hutson, who is based in the Presbytery of East Iowa, is helping coordinate distribution centers in Cedar Rapids, though not in an official PDA capacity.

“National Response Team members are not just effective when they go somewhere,” Kirk said. “They can be valuable resources in their own presbytery.”

Smith notes from experience that not all storm damage is immediately evident. Some roof damage, he says, may not be obvious until the next time it rain

“We really have no idea how long this will affect them,” he said. “This is very, very serious.”

To support this response, designate gifts to DR000015.