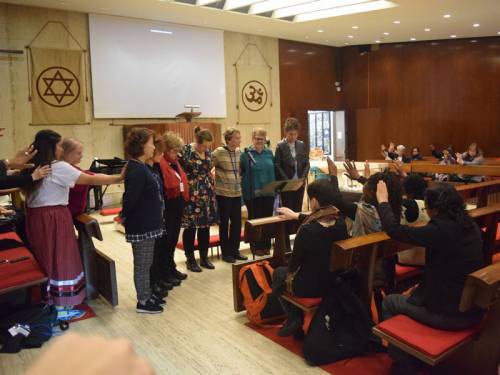 Participants in the March 15 worship service at the UN Church Center, presented by the Presbyterian Church (U.S.A.), prayed over members of the Presbyterian delegation from New Zealand following terror attacks in Christchurch that morning. (Photo by Rebecca Anderson, Lutheran World Federation and Ecumenical Women)

NEW YORK — Doreen Alefaio was on the grounds of the United Nations checking messages on her phone when she realized what was happening back home in New Zealand.

Tears started to flow as she saw reports of the attack on two mosques in Christchurch that we now know took the lives of 50 worshipers attending Friday prayers on March 15. A woman who is Muslim approached her and asked where she was from and took her hand when she said, “New Zealand.”

“For the next few moments they held hands and cried together at the United Nations, worlds apart but united in grief for the events taking place,” Steph Redhead, Alefaio’s fellow New Zealand delegate to the 63rd UN Commission on the Status of Women (CSW), wrote on her blog, reflecting on being more than 9,000 miles from home when senseless tragedy put her country in a rare global spotlight.

Redhead quoted Alefaio on her blog, saying the woman’s “warm words flowed with sympathy as she gently held my hand to say we will get through this together as I gurgled out apologies for the devastating actions of one, in the land that is known for  diversity, peace and aroha, love, alofa, sarang, ofa … it’s where I’m from, Aotearoa, it is my people but the single act of terror is not me, is not us … Her presence represented the 49 that were gone, her scarf covered her head, covered her neck but all I could see was the 49 beings, the 49 families of a community, in my community, in our community.”

Just one day earlier, Alefaio, Redhead and six of their fellow Presbyterian delegates to the CSW were reveling in the global fellowship of their faith, joining in morning worship at the UN Church Center, which includes the offices of the Presbyterian Ministry at the United Nations (PMUN), attending discussions and events and taking in the global experience of the annual commission.

“A lot of what’s discussed here are social and global issues,” Alefaio, who is from Auckland, said in an interview following a dinner presented by Ecumenical Women at the Church Center on March 13. “So, applying your faith to what’s going on is why I wanted to come. I used to teach theology, so teaching values, teaching Christian principles … it’s not just about going to church. It’s wider issues and venturing out into the communities we live in.”

And it was quite a venture as most of the participants endured two- and three-leg, 24 hour-plus journeys to get to New York for the commission. Though New Zealand is a nation of 4.5 million people and is roughly the size of Colorado, some delegates did not meet each other until they arrived in New York.

The eight-person group is something of a combined delegation of Presbyterian and Methodist Women, a union that has existed in various forms since 1985. By pooling their resources, the group — six Presbyterians and two Methodists — have been able to take on projects outside of their country in places such as Africa.

Asked about working with the New Zealand delegation, PMUN director Ryan Smith wrote, “I’m reminded of Romans 12: 4-8 when Paul writes, ‘For as in one body we have many members, and not all the members have the same function, so we, who are many, are one body in Christ, and individually we are members one of another. We have gifts that differ according to the grace given to us: prophecy, in proportion to faith; ministry, in ministering; the teacher, in teaching; the exhorter, in exhortation; the giver, in generosity; the leader, in diligence; the compassionate, in cheerfulness.’ 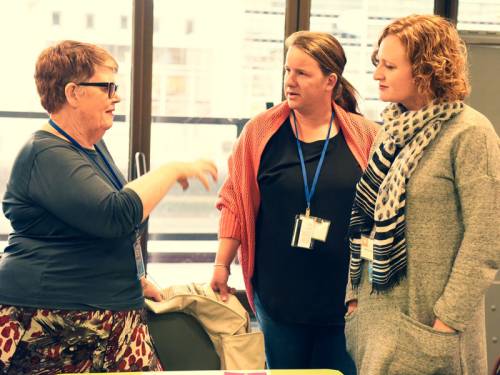 Mavis Duncanson, Sally Pretty and Stephanie Redhead spoke prior to a dinner at the United Nations Church Center on March 13. (Photo by Rich Copley)

And the delegates from New Zealand embraced the around-the-world aspect of the Commission, which concluded Friday, even if it sometimes seemed a bit focused on the northern hemisphere.

“Everything we see about world events happens through a media lens, so when we hear about what’s happening in occupied Jerusalem, when we hear about the plight of human trafficking, it can just be information that’s fed to you through the news, and then you carry on, eating your dinner,” Redhead said after the March 13 dinner. “You’re trying to get your head around it, but you’re only getting the information that comes through the media lens.

“Then you come here and you meet Dana from Jerusalem, and you hear her story about being a houseworker, and all of a sudden, woman-to-woman, you say, ‘I hear you, I get you,’ and now I want to go back home and tell people about my friend Dana that I just met and her story.”

Little did she know that a little more than 24 hours later, she and her fellow delegates would be a window into their nation as it endured tragedy. 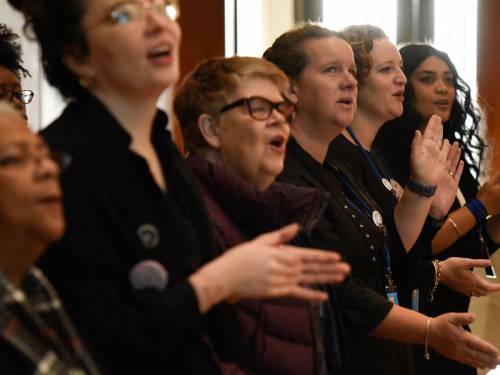 Members of the New Zealand delegation to the 63rd UN Commission on the Status of Women joined in worship at the UN Church Center on March 14. (Photo by Rich Copley)

That Friday morning was the Presbyterian Church (U.S.A.)’s turn to present 8 a.m. worship in the UN Church Center, and the New Zealand delegation found itself in the embrace of fellow Christians who mourned with them and lit candles for the victims of the terror attack.

Mavis Duncanson of Dunedin recalled attending a basketball game at Madison Square Garden a few days later. “There were tears streaming down my face,” she said, “as the whole stadium was asked to stand for a moment of silence for the deceased and for our nation.”

Though they were encouraged by New Zealand officials at the UN to remove any outward sign of where they were from, for their safety, the delegates found their accents were frequently a giveaway, and often felt themselves in the embrace of fellow Commission on the Status of Women delegates.

And at the female-focused event, the New Zealanders found themselves able to take some pride in the woman leading their nation through the crisis, to international rave reviews: Prime Minister Jacinda Ardern.

And it put a bit of an exclamation point on New Zealand’s overall pride in its role advancing the rights of women. The night after the Church Center interview, Methodist delegate Dianne Claughton of Christchurch delivered a handwritten note that recalled 2018 as the 125th anniversary of women having the right to vote in New Zealand – more than a quarter-century ahead of the United States – and the pioneering role of Kate Sheppard, the leader of that movement.

Claughton concluded, “We are proud of our history and proud to be in New York for CSW63.”