The Rev. Dr. Betty Tom encourages women to ‘stand up, speak up and lift up’ 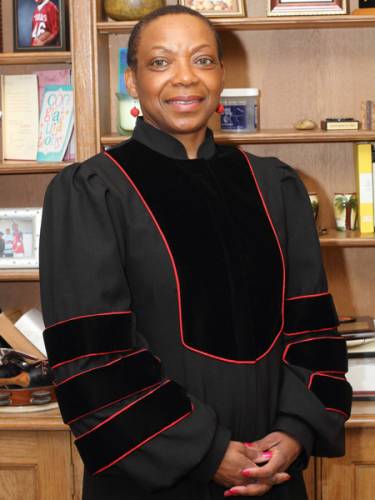 The Celebrate the Gifts of Women worship service was a collaborative effort developed by the Women’s Leadership Development and Young Women’s Ministries in the Racial Equity & Women’s Intercultural Ministries of the Presbyterian Mission Agency and Presbyterian Women.

The event included a diverse group of women from different ministry areas participating as worship leaders. “During the month of March, we give special recognition to all the awesome accomplishments of strong and amazing women like Katie Geneva Canon, Kamala Harris, Thelma Adair and so many others who have paved the way for us,” said Jewel McRae, Coordinator for Women’s Leadership Development and Young Women’s Ministries. “Every woman has their own narrative and gifts to share with us and we are truly blessed to have the Rev. Dr. Betty Tom share her gifts with us as God disrupts us with love, which is the theme for 2021.”

With Exodus 2:1-4 as the Scripture for her message, Tom, transitional pastor at Old First Presbyterian Church in Newark, New Jersey engaged viewers of the online service with a sermon titled “Watch Me Rise.”

Tom opened her remarks with a historical reflection on Adolf Hitler’s rise to power. “Germany, once a republic country, soon became a dictatorship and the civil rights of many German people were severely limited, “said Tom. “German Jews found themselves in the crosshairs of the Nazi regime and they were the constant victims of violence, harassment, oppression and even intentional genocide.”

“But, beloved, long before Hitler came on the scene, we had this biblical account of one of the first attempts to kill massive numbers of people to try to destroy an ethnic group or nation,” Tom explained. Tom said the Exodus account of saving baby Moses was the embodiment of God’s plan to disrupt, unsettle and interrupt the devil, God’s plan of raising up a powerful leader.

Tom says despite being forced into every manner of field labor from working to the point of physical and mental collapse, and even attempted genocide, God’s beloved and chosen people became increasingly fruitful. “Yet the more they were oppressed, the more their birth numbers exploded, and this terrified the Egyptian King Ramses,” said Tom.

“In this historically horrendous situation and all those like it, God has used nameless, blameless, shameless women, women to unnerve the powerful with these tools of love,” Tom said.

According to Exodus 1:15–21, God used the Hebrew midwives Shiphrah and Puah to prevent the genocide of Jewish boys by the Egyptians. “These disruptors refused to obey an official and diabolical order that commanded them to kill innocent Hebrew baby boys,” Tom said.  “We watched them rise up and upset the profane plans of the powerful.”

Tom went on to tell the story and role of Moses’ birth mother Jochebed. She said, “Jochebed, whose name literally means ‘Yahweh is my glory,’ living under slave status, is one of the many women whom we celebrate this month, who started and who continue to serve as conduits of God’s trouble.”

“The Rev. Dr. Jennifer Lord [who developed the materials for this year’s Celebrate the Gifts of Women resources] used the phrase ‘effective disruption’ to describe the long term and transformative effects of dismantling oppressive systems.”

Tom said that Lord writes that for a disruption to be effective, it must have a lasting impact on the situation or the condition. “It is an intervention, and it requires planning and commitment,” said Tom. “Jochebed’s story tells of one such intervention. Jochebed interrupted the predatory plans of the powerful with a calculated, purposeful and loving act of civil disobedience.”

“By faith, Jochebed hid her beautiful God-kissed baby for three months until she could no longer risk her family’s life.”

Throughout her sermon, Tom chronicled Jochebed’s process of building the “arc” that cradled her son Moses, rescuing him from the fate of certain death.

“We see Jochebed rise to the occasion when God intercepted evil and called her back to breastfeed her own baby and make a living wage to do so,” said Tom. “Her plan was disruptive and effective because saving her baby Moses set it into motion. God’s ultimate plan was to send Moses on a 120-year mission to deliver the people of God from the life of cruel servitude, systemic poverty and genocide and lead them through the wilderness to help establish a nation of people who would call on the name of the Lord.”

Tom paid homage to other women who were effective disrupters, including Harriet Tubman, who made 19 trips to the South over a 10-year period to help over 300 enslaved Africans escape to freedom. “She disrupted a system of slavery, poverty, cruel and inhumane treatment of God’s children. I would call that effective disruption,” said Tom. “Dolores Huerta, the co-founder of United Farm Workers, was arrested 22 times for participating in nonviolent civil disobedience marches.  She fought for the economic improvement for the Latino, Mexican and Chicano immigrant farmer. I call that effective, effective disruption.”

In closing, Tom said, “So what about you? My siblings, sisters, how will you be remembered? Will you be remembered as women who stood up? Women of God, rise up. Make some good trouble. Be nasty women. Be disruptive. Disrupt oppressive, racist and unjust economic, environmental and social systems. Stand up, speak up, lift up!”