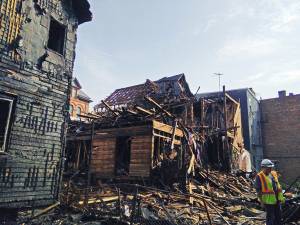 Fire began in the middle house in this Brooklyn neighborhood. The houses including the church manse will have to be demolished. —Robert Foltz-Morrison

Black smoke could be seen from miles away early Sunday evening as fire broke out in a three-story residential home in Brooklyn, New York. As many as 200 firefighters responded as flames spread to five houses and the Presbyterian Church of the Crossroads. One of the houses was the church manse. As many as nine people, mostly firefighters, were injured before the fire could be brought under control.

Authorities say the blaze started around 6:30 p.m. and within minutes, spread to the other houses and the exterior of the church. Firefighters were able to put the flames out at the church before it got out of control. Investigators believe the fire started during some repair work on a garage roof involving a torch.

The Rev. Dr. Robert Foltz-Morrison, executive presbyter of the Presbytery of New York City, says the church manse will have to come down.

“There were a few houses adjacent to each other and the middle house is where the fire started,” he said. “Houses on either side were so damaged that the city has decided they are a safety hazard. You can see that the side and back of the manse are deeply charred. Structurally, it is leaning now and will fall on its own if not demolished.” 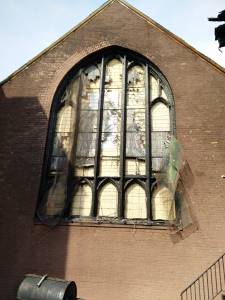 A multi-house fire destroyed the stained glass windows of the Presbyterian Church of the Crossroads in Brooklyn. —Robert Foltz-Morrison

Foltz-Morrison says the church lost the stained glass window that was facing the burning houses.

“The sanctuary got about six inches of water that came from the fire hoses and that put another foot of water into the basement,” he said. “There is also some water in the hallways and fire damaged the deacons’ room. There was also some smoke damage.”

The church is home to two Presbyterian congregations, including one Hispanic congregation. Folz-Morrison says both have separate services and schedules and total approximately 75 to 80 members.

“They will not be able to use the sanctuary. The floors will have to be completely replaced due to water damage,” said Foltz-Morrison. “They want to remain in the building for worship but will have to decide whether to move to a chapel area or perhaps bring both congregations together.”

The church also provides a food pantry to serve nearby residents. As a result of the fire, Foltz-Morrison says they will have to close it down for approximately a month. They also offer a baseball academy for small children in the church activity center. It will be closed during repairs.

Rick Turner, associate for domestic disaster response with Presbyterian Disaster Assistance, has been in contact with Foltz-Morrison.

“During the call I offered PDA’s assistance in the form of a church damage grant. I also reminded Bob that PDA has a team of volunteers trained in church damage responses,” he said. “This team addresses the deep spiritual and emotional response associated with a church being damaged. Churches are tied to the communities as well as the congregations and when a familiar landmark, in this case a holy place, is impacted by a disaster, the entire community feels the loss.”

Meantime, the Red Cross is working to re-locate those displaced by the fire.

“This is our Presbyterian presence,” said Foltz-Morrison. “They are doing very well through this and are managing a lot of the details. The city is right there with them through the process.”