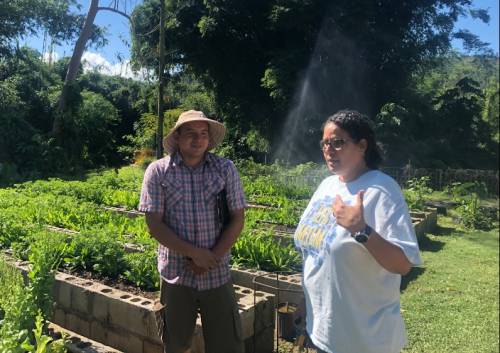 LOUISVILLE — The Office of Christian Formation in the Presbyterian Mission Agency partnered recently with the Presbyterian Church Camp and Conference Association (PCCCA) to bring Spanish-speaking camping leaders from the mainland to Campamento El Guacio in Puerto Rico.

For two days, the five-member contingent worked with and learned from staff and board members at El Guacio, discussing issues like prices, fund development, staffing structures and marketing.

“We wanted to create a connection with them, provide a support system and work together with them to create a Spanish-speaking network,” said PCCCA executive director Joel Winchip.

Perhaps as importantly, they listened to Guacio’s story in their native language.

Nery Vera of Big Bear Lake Christian Conference Center in California was one of those on the trip helping to translate the many stories of Guacio’s history.

“Originally, they were founded as a ministry (school and hospital) to help the community,” Vera said. “To hear about the miracles that happened during the hurricane crisis and how they’ve been used since was inspiring. In a way they’ve been able to reconnect to those roots of mission and ministry to the community.”

Despite having its power lines buried in bamboo trees after Hurricane Maria devastated the island in September 2017, Guacio experienced no damage to its electrical infrastructure or water supply. The only service affected was the line coming into the camp from the electrical company.

With a generator, Guacio had power not only for themselves but for the community. They got washing machines for people to use and an ice machine to help with refrigeration needs, such as keeping medications cool.

And with groups coming to do mission work, including rebuilding a home in the camp, Guacio is now a hub for hurricane recovery efforts in the community.

“The hard work that is being put into this ministry is so evident, as are the relationships with community and their hope for more growth,” said Rebeca Franca of Cedarkirk Camp and Conference Center in Lithia, Florida. “It was an incredible experience to be physical present, to witness their passion and hopes for growth.” 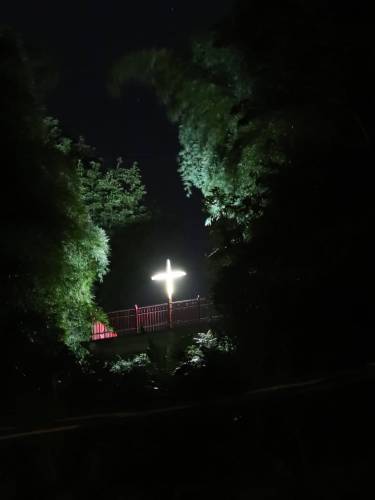 Winchip says Guacio is an incredible resource that has amazing capacity, with state-of-the-art kitchens and many bedrooms with private bathrooms. He wonders why a church group that wants to do an international mission trip wouldn’t consider going to El Guacio instead.

“They can handle large groups,” he said. “And there would be no hassles of getting passports or visas.”

The Guacio trip is part of PCCCA’s efforts to better relate to Spanish-speaking Presbyterian camps — and to expand the network by making it more inclusive and diverse.

This trip occurred thanks to a partnership with the PMA’s Office of Christian Formation, which formed a collective this year with the church’s five organizations that support formation ministries across a lifetime.

“We asked each of them to dream about the partnership and come up with new initiatives and projects that we could work on together that reflect the mission priorities of the PMA,” said Christian Formation’s Stephanie Fritz. “This was PCCCA’s idea. I was excited to participate in the trip to expand both their ministry and El Guacio’s.”

A similar trip is being planned next year. The group plans to visit the Presbyterian Camp in Cuba (CANIP).  Guacio director Wilmari Vargas-Ventós is planning on joining them as PCCCA continues the work of growing and supporting a Spanish-language network.

“We will remain in communication with Guacio,” Franca said, “and continue to pray together for their ministry in this special place.”