Share God’s love with our neighbors-in-need around the world through One Great Hour of Sharing.
Make A Donation Click Here >
Home › Pedal for Protein prepares for its third fundraiser to battle hunger

For the third year in a row, a group of avid cyclists between 30 and 70 years of age will take to the California roads this September to combat hunger. The Pedal for Protein ride is scheduled for September 18-22. The Presbytery of the Redwoods launched the ride two years ago to help community food pantries provide protein-rich foods to families in need.

“In the past, the tour has lasted seven days covering more than 429 miles,” said Patty Sanders, Hunger Action Advocate and ride director. “This year we’ve shortened the trip to 268 miles over five days.” 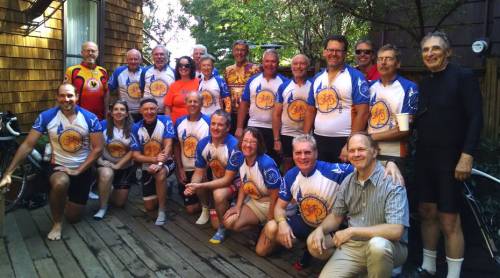 Participants in the 2014 Pedal for Protein along the California Coastline to raise funds for community food pantries. In two years, more than $49,000 has been raised. Photo courtesy of the Presbytery of the Redwoods.

In its first two years, the bike ride has raised approximately $49,000. The presbytery’s hunger task force then provides grants to grassroots food banks at the end of the year.

“It is so expensive to live in this area, particularly in the southern part of our presbytery. Housing is very expensive and people are paying tremendous amounts for one or two bedroom apartments and many are still recovering from losing their homes,” said Sanders. “Many people don’t have jobs or are working two or three jobs to make ends meet. The homeless are just a small part of the people the food pantries serve. Most of the pantries are helping the working poor who have had medical emergencies or no insurance at all, making it difficult to feed their families.”

Sanders recently attended the 222nd General Assembly in Portland, Oregon and staffed the Presbyterian Hunger Program’s booth in the exhibit hall. She talked with numerous Presbyterians about the fundraiser.

“I try to encourage churches and presbyteries to consider doing something like this to help their various community needs,” she said. “You don’t have to be an athlete, just have a goal to raise money whether it is for a food bank or a sports program for children or another need. You just have to have a heart for this and work with someone who is good at organizing.”

“One of the things that’s so terrific about Pedal for Protein is that Patty connected her work as a Hunger Action Advocate to a passion she already had for fitness in order to address a specific problem in her presbytery,” said Jessica Maudlin, associate for PHP’s Enough for Everyone. “This is a perfect example of the way that PHP connects to local presbyteries in a way that allows for what’s best in the local context.”

Sanders has been a Hunger Action Advocate for more than 10 years and was inspired to start the bike ride while running her own business.

“I have a sports business and attended a bike expo in Seattle. Across from my booth was a Catholic church that was putting on a bike ride for their local food bank,” she said. “I felt God set me right across from that booth for three days. I started thinking that I should put on my own ride to help our food pantries.”

Sanders says the five-day ride will take participants from Mendocino through Ukiah, Middletown, Davis and finish in Rockville. The ride will include a special stop at the U.S. Bicycling Hall of Fame in Davis on the 21st.

For those who wish to participate but can’t take part in the entire ride, there is the option for a one-day ride on the 22nd from Rockville and includes a scenic 48-mile three bridges loop in Solano County.  Shorter options include a ride through Napa/Solano County of 10, 25 and 35 miles.

Sanders says 16 riders participated in 2014 with 18 taking part in last year’s ride. So far, 17 riders have registered for this year’s tour. The maximum number of riders that can participate is 30.

Gifts to the One Great Hour of Sharing Offering help support the Presbyterian Hunger Program.