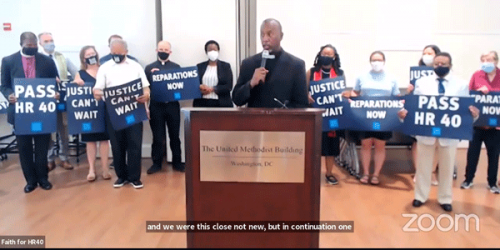 The Rev. Jimmie Hawkins of the PC(USA) makes final remarks during an ecumenical press conference calling on the House of Representatives to pass a bill establishing a commission to study reparations to people who are Black for past injustices. (Screenshot)

LEXINGTON, Kentucky — The Presbyterian Church (U.S.A.) Office of Public Witness participated in an ecumenical call on Tuesday to support a bill before the House of Representatives calling for a commission to study reparations for people who are Black following centuries of injustice.

“As a nation, we have yet to address the legacy of our violent past and confess past and present harms,” said Laura Kigewba James, Program Coordinator for Grassroots Organizing on the General Board of Church and Society of The United Methodist Church, to open the press conference held at the United Methodist Building on Capitol Hill. “The legacy of slavery continues to remain the reality of structural racism and violence that exists for myself and my community.”

The Rev. Jimmie Hawkins, Associate Director of Advocacy for the PC(USA), said, “We urge Congress to pass H.R.40 before recess. This is an issue of racial justice, equity and equality. We remind Congress that this call is not new but a continuation of one that has been issued since the end of the Civil War.”

H.R.40 — Commission to Study and Develop Reparation Proposals for African Americans Act calls for the establishment of “a commission to study and consider a national apology and proposal for reparations for the institution of slavery, its subsequent de jure and de facto racial and economic discrimination against African Americans, and the impact of these forces on living African Americans, to make recommendations to the Congress on appropriate remedies, and for other purposes,” according to the bill’s text.

Several speakers at the press conference repeated the point that the bill calls only for a commission to study reparations, not for any actual payments. Still, such a proposal has languished 40 years in Congress before the House Judiciary Committee voted 25 to 17 on April 14 to  send the bill to the full House for a vote. Participants in the press conference urged the House to schedule a vote and pass the legislation before its August recess.

The press conference was carried live on the National Council of Churches Facebook page, and in addition to Presbyterian and Methodist speakers, participants in the event and the call came from the Maryland Diocese of the Episcopal Church, National African American Clergy Network, the Union for Reform Judaism, the Evangelical Lutheran Church in America, NETWORK Lobby for Catholic Social Justice, and the Samuel DeWitt Proctor Conference, which represents a cross section of African American faith leaders and their congregations.

While the speakers asserted the vote at hand was just for a commission to study the issue, many speakers said reparations are due, and that this step is to study the best ways to go about that.

“We learned in school, if you steal something, you pay it back,” Bishop Eugene Sutton of the Maryland Diocese of the Episcopal Church said.

Yolanda Savage-Narva, Director of Racial Equity, Diversity, and Inclusion for the Union for Reform Judaism, pointed to a number of statistics illustrating the enduring inequities between whites and Blacks, including that Black infants are twice as likely to die before their first birthday, and asked, “What are we willing to do for the next generation?”

Hawkins closed the gathering praying, “Most gracious and loving God, you are not partial and demand fairness and respect for all people. Touch the hearts of the members of Congress who are resistant to this legislation so that their minds might be opened to the reality of life in this nation, that there is not liberty and justice for all as long as slavery’s legacy of inequity remains unresolved. Sustain those who are committed to this effort that they might know that it is your will that all people are equipped with the requirements for a healthy and whole life.”