Building a Life of Faith. Support the Pentecost Offering..
Make A Donation Click Here >
Home › Pastors call on churches to teach the truth about white supremacy 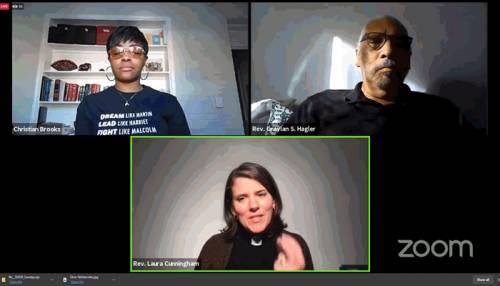 The Rev. Christian Brooks (counter-clockwise from top left) of the PC(USA) Office of Public Witness moderated a discussion with the Rev. Dr. Laura Cunningham of Western Presbyterian Church in Washington, D.C. and Rev. Graylan S. Hagler of Plymouth Congregational United Church of Christ for the final episode of the webinar series, “Where Do We Go from Here?” (Screenshot)

LEXINGTON, Kentucky — Millions of Americans were surprised and shocked when insurrectionists stormed the United States Capitol on Jan. 6 attempting to stop the certification of the November presidential election.

The Rev. Graylan S. Hagler of Plymouth Congregational United Church of Christ in Washington, D.C. was not.

“This was not new,” Hagler said he told his congregation the next Sunday. “This was a part of the historical fabric that exists in the United States of America, that very often white supremacy groups, white idolatrous groups resort to violence when they don’t get their way.”

The Rev. Dr. Laura Cunningham of D.C.’s Western Presbyterian Church brought a slightly different perspective, recalling that she and other pastors in Washington had been on a call a few days before with the mayor’s office, Department of Homeland Security, and police warning that “this was not going to be a good scene on January 6.” That became immediately apparent to her that morning when she pulled into the church’s Foggy Bottom neighborhood and saw the usual “geeky” university and diplomatic community that surrounded the church replaced by maskless, middle-aged white people, seeming to confirm what officials had told her and her fellow clergy to expect.

Her congregation was used to protests, but “this was not a protest,” Cunningham said.

As the Capitol was breached and she contacted people in her congregation, “one person said, ‘These folks have Jesus on their flags.’ And there was a lot of concern like, ‘That is not the Jesus I follow. The Jesus I follow is not aligned with Christian nationalism.’

“As I connected with people throughout the day, I realized there was a lot of shock, there was a lot of horror, and my congregation is a predominantly white congregation. I think for many of those of our community, it was realizing the threat that folks were facing in a new way that they had not considered previously.”

Cunningham and Hagler were participating in the fourth and final episode of the Presbyterian Church (U.S.A.) Office of Public Witness’ (OPW) webinar series “Where Do We Go from Here?” looking at the aftermath of the Jan. 6 attack. Previous episodes had considered issues including white supremacy theology, Christian nationalism, and the intersection of gender issues.

This episode focused on the D.C. churches, where the issues were dumped on their doorsteps anew on Jan. 6 and show no signs of going away, as if they ever had.

“White America’s always surprised at examples and manifestations of racism and racial violence,” Hagler said. “And you got to ask, why is that? Well, that’s because we have not paid attention to the narrative of this country. We fundamentally believe that this country is benevolent, and it is not born out of a benevolent history.”

Then he ticked through receipts.

The 2020 police killings of George Floyd, Breonna Taylor, Tony McDade, the murder of Ahmaud Arbery, as well as many other incidents, and the Jan. 6 insurrection, perpetrated by many people carrying Nazi and Confederate symbols and messages, fall in line with a history most people do not know, Hagler said. History in the United States, the pastors and discussion moderator the Rev. Christian Brooks of OPW concurred, is mostly taught from a white perspective.

“You have people coming out of school, thinking that America is all right,” Hagler said. “And those people of color are the problem, and something must be wrong with them, because they’re always kvetching and they’re always protesting, and they seem to always be complaining about something and they never seem to be satisfied. That’s the only conclusion you can come to when you’ve been indoctrinated with a history that was not a history at all.”

And that is one of the roles the church can play, Hagler and Cunningham said, in correcting the narrative and telling the truth about white supremacy in America and even in the church (Cunningham pointed out that Wilson was a Presbyterian elder). Since tensions rose at the beginning of last summer with Floyd’s death, Cunningham said she and her congregation have realized their own need to work to fight racism and white supremacy.

“The work means being able to be uncomfortable, and being able to be OK being unsettled, being angry at things that weren’t part of our consciousnesses previously; they should have been,” Cunningham said. “As I’ve pastored folks, I’ve heard real anger about things as blinders are coming off.”

Anger and discomfort are things that often hold churches back from tackling tough issues and, sometimes, simply telling the truth.

Hagler offered a challenge to churches that view themselves as being in solidarity with communities of color to put signs up outside their buildings declaring themselves “white supremacy-free zones,” and holding meetings with their members and the community to discuss the topic and issues that taking such a stand brings up.

“That mental image of ‘white supremacist-free zone’ outside of my church, I love it,” Cunningham said. “If we did it, I would want to do everything I could to make sure it was true.”

Hagler finished the idea saying, “The reality is that we’re never ever going to really get beyond this until basically white folks decide that they’ve got some skin in the game.”

Previous editions of ‘Where Do We Go from Here?’:

Discussion About the attack on the U.S. Capitol