by Leslie Scanlon | The Presbyterian Outlook 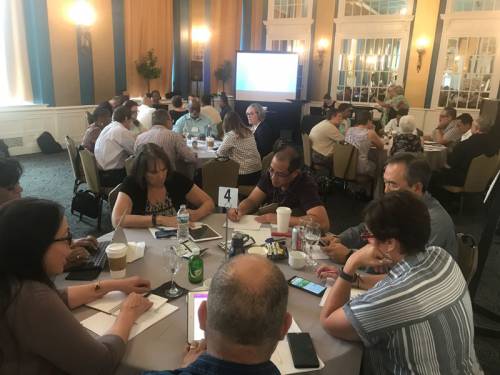 BALTIMORE — Here’s an idea. What if the Presbyterian Mission Agency picked one clear mission focus for the Presbyterian Church (U.S.A.) – the idea of being a Matthew 25 denomination – and stuck with it for five or 10 years?

The Matthew 25 vision that the Presbyterian Mission Agency (PMA) unveiled in April has three key emphases — on congregational vitality, confronting structural racism, and eradicating systemic poverty — so the work it calls Presbyterians to is important.

One approach for building PMA’s budget for 2021 and 2022 might be to stick with Matthew 25 for at least two more years — making that the top funding priority — and continue to build on the energy of that biblically-based vision.

That possibility got some traction in the last day of a consultation on budget priorities that the Presbyterian Mission Agency Board held with mid council leaders August 4-5 in Baltimore. The board wanted to get a sense of what mid council leaders are seeing at the grassroots and to hear their ideas for PC(USA) budget priorities for the next two years. So the board scheduled a meeting shortly after Big Tent 2019 ended, inviting about two dozen mid council leaders, with representatives from the synods and from large, small, and medium-sized presbyteries, along with two non-geographic presbyteries (Presbytery of Dakota and Eastern Korean American Presbytery).

“These are not academic exercises,” said Cindy Kohlmann, a presbytery executive and co-moderator of the 2018 General Assembly, along with Vilmarie Cintrón-Olivieri. Kohlmann asked these Presbyterians to remember, as they make dollars and cents decisions, the potential human impact — for asylum seekers along the border, people suffering injustice, those who are hungry and hurting and disenfranchised.

The conversation on this final day of the consultation packed some potency, although the board made no formal decisions beyond approving a set of “debriefing notes” it will use as the process of shaping the budget (which is to be approved next April) proceeds.

Laurie Ferguson, a minister from New York state who facilitated the conversation, said the mid council leaders showed little appetite in the first day’s conversations for winnowing down a potential list of 12 overarching priorities to the top three to five.

Ferguson said she also heard a longing “that there be a focus that is consistent” in the PC(USA). “That every General Assembly doesn’t come up with the new flavor that we’re now going to ask everybody to get on board with.”

Limitations and work to be done

Some mid council executives also pointed out limitations of focusing too intensely on Matthew 25. “I’m uncomfortable if we think that’s the only thing that makes churches vital,” said Nancy Martin Vincent, synod executive of the Synod of the Pacific. She and others named the importance of leadership development and providing resources to help congregations and pastors operate in healthy ways — for example, by providing coaching and mentoring for pastors, encouraging them to take Sabbath time, and paying attention to problems or dysfunction that can undercut a congregation’s ministry if allowed to fester.

Jan Edmiston, general presbyter of Charlotte Presbytery, said she’s known ministers who were on fire for social justice — really gifted at working on issues such as racism and poverty — “but have no emotional intelligence.” Even when the mission emphasis is clear and significant, “we can’t be leaders if we have no followers,” Edmiston said.

“If you’re healthy, you’re able to serve the least of these,” said Aisha Brooks-Lytle, executive presbyter of the Presbytery of Greater Atlanta. “If you’re not, it’s hard to serve.”

Yvette Noble-Bloomfield, an ecumenical representative on the board from the United Church in Jamaica and the Cayman Islands, said she thinks more exegesis needs to be done to unpack the implications of the 25thchapter of Matthew’s Gospel — a call to welcome the stranger, feed the hungry, clothe the naked — for structural racism and white supremacy. “I’m no expert on racism,” she said. But “the text has to speak from underneath for persons to really buy into Matthew 25 as a guiding principle.”

Cintrón-Olivieri said there needs to be flexibility in the Matthew 25 invitation to take on racism in different contexts. Latinos and Koreans, and others who speak languages other than English, can “interpret this is what it means to be Matthew 25 in those contexts,” she said. “Not just receive something that is in canned form from our denomination but comes out of those voices.”

Brooks-Lytle raised the importance of letting Presbyterians know the PMA vision and also the Matthew 25 work that’s already underway in congregations. Some in the pews “have no idea” what’s happening in other contexts, she said.

Brooks-Lytle also spoke of a bipartisan “lifting up the we” — so that if one church runs a food pantry while another wants to push for changes in public policy on hunger in America, “collectively we can cover all the bases.” Also, by sharing the stories of what churches are doing, Presbyterians of differing political and theological views will see that while they might not agree on everything, they can still work together on ministry to those in need.

After some discussion of procedure and next steps, PMA board member Jeffrey Joe asked the mid council leaders a great ice-breaker: “What’s the level of trust in the room?” Some of the answers:

The mid council leaders also described trust as a two-way street. For example, Joyce Lieberman, synod executive of the Synod of South Atlantic, said she sometimes finds out that PC(USA) agencies have held events in her region “after the fact.” Presbytery and synod leaders said they’d like to have some conversation ahead of time when PMA leaders are making a visit — not just to be told “we’re having this event on this day and please have some people there,” as Lieberman put it.

José Luis Casal, who is retiring this month as PMA’s director of World Mission, jumped in with an observation. “We are still discussing our internal problems,” Casal said. “Dear friends, there are so many things happening outside here,” out in the world.

There also was some honest talk about power imbalances in the PC(USA) — and the recognition that the PMA board has sometimes said “no,” particularly to funding ministry for people of color.

Lynn Smit, stated clerk of the Synod of Rocky Mountains, said hers is a reduced-function synod, and because of that sometimes it seems like “we don’t matter. But our presbyteries do matter. I don’t want us to be forgotten” just because the synod has a smaller staff,” Smit said.

Fern Cloud, stated clerk of Dakota Presbytery, said her presbytery includes 21 Native American churches in four states. There’s a big disconnect between those congregations and the national church, Cloud said. “We are small, but we are people of faith. We are Matthew 25. … For us, it’s a way of life. The whole gospel message is a way of life.”

Pine Ridge, in South Dakota, “is the poorest place in the nation — in the whole nation,” Cloud said. “It’s a Third World country out there. Nobody knows about that.”

None of the ministers of the 21 churches in her presbytery draws a salary. “We don’t have pension plans, but we’re here,” she said. “We’re doing the work of Matthew 25 because we believe in it. One reason we’re not at the table (of national church events) is because we all have to work. We’re tent-makers.”

“Our budget reflects who we are,” said PMA board member Conrad Rocha. The PMA budget provides funding for only a part-time staff member for Native American ministry and a part-time position for Hispanic ministry, he said.

“We’re a church that says it’s committed to reflecting what society looks like,” Rocha said. “Then you look at our budget. … That says something about who we are and what we’re about.”