Inspiring faith in our youth. Support the Pentecost Offering.
Make A Donation Click Here >
Home › Once an oasis of peace, Cameroon is now a country in conflict

International influence is needed to bring factions together 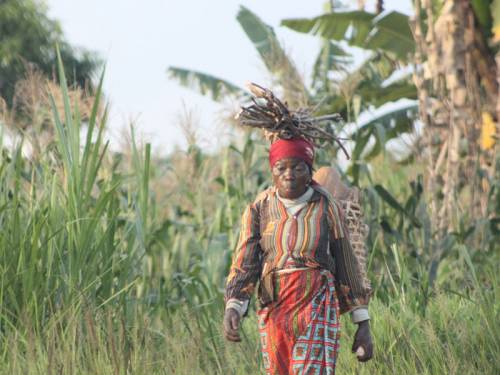 After working on the farm all day, a woman in Cameroon gathers firewood to cook the evening meal. (Photo by Valéry Nodem)

LOUISVILLE — Once surrounded by countries in conflict, Cameroon was an oasis of peace in Africa.

It is no longer.

The factions in Cameroon go back to World War I. Germany lost the war and was forced to divide Cameroon and its abundant natural resources between France and England. France took about 80 percent of the geographic region and England took a smaller percentage of land bordering Nigeria.

For many years, the French and the English-speaking regions lived in harmony, but English-speaking Cameroonians, because of excessive centralization by the French-speaking majority, began feeling marginalized. By the fall of 2016, Anglophones (English speakers) were feeling the need to protect their culture as the French language and system of law seemed to purposely infiltrate the legal and educational system in their region.

On October 6, 2016, there was a peaceful sit-in by lawyers and teacher trade unions in the English-speaking regions of Cameroon. They asked for the common law system to be practiced in Anglophone courts and not the civil law used by the French court. They wanted new laws translated into English.

Rather than responding with dialogue, the government sent in police with tear gas and the makings of a civil war had begun. Today, the conflict has killed more than 3,000 people and displaced nearly 730,000.

Valéry Nodem, associate for International Hunger Concerns with the Presbyterian Hunger Program (PHP), was born in Cameroon and lived there until he began work with the Presbyterian Church (U.S.A.) nine years ago. He believes a visit by the country’s president to assuage grievances could have prevented the violence. But the president has not visited the English-speaking region since the conflict erupted.

Paul Biya has been president of Cameroon since 1982 and has survived several attempts to remove him from power. He is 87 years old and his party, the Cameroon People’s Democratic Movement, holds a substantial majority in the country’s legislature.

For years, a significant proportion of revenues from oil, the main export commodity, was not being accounted for in the country’s national budget. There are many who believe the French government wants to maintain the status quo in Cameroon and in many countries in Africa once colonized by France because it benefits their business interests in the country. French companies dominate Cameroon’s economy and control a large segment of the banking system and the country’s currency. 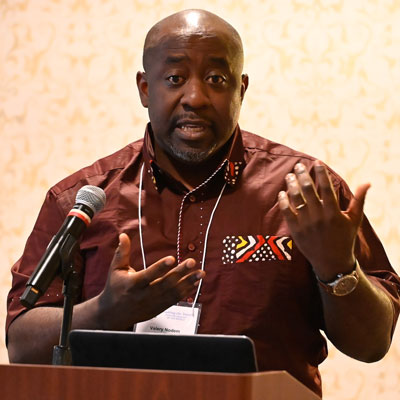 “Unfortunately, because of the civil war in the country, money that should be invested in social development and building the country’s infrastructure is instead being invested in maintaining military presence on the ground, creating more hunger, poverty and displacement,” said Nodem. “More effort from the government to find a peaceful mediation to the conflict will save lives, restore peace and trust, and channel investments in other sectors in the country.”

The ongoing conflict between the military and the separatists is hurting civilians caught between the rival factions. In the struggling economy, farmers cannot grow crops to sell, people cannot work, and, since the conflict erupted in 2016, children cannot attend school because of violence. The military is accused of killing and burning villages and the separatists are accused of extorting money for their cause and killing civilians.

“It’s a brutal war happening there,” said Nodem, one that’s creating another cycle of poverty and preventing access to humanitarian aid. “People are fleeing into the bush to hide, eating leaves to survive. If mediation doesn’t happen soon, I’m afraid the hurt will take many generations to forget.”

Nodem visited Cameroon last summer with Presbyterian Disaster Assistance. He helped deliver food and other necessities to people who had escaped the conflict zone and were living in other places, many with no work and no income. 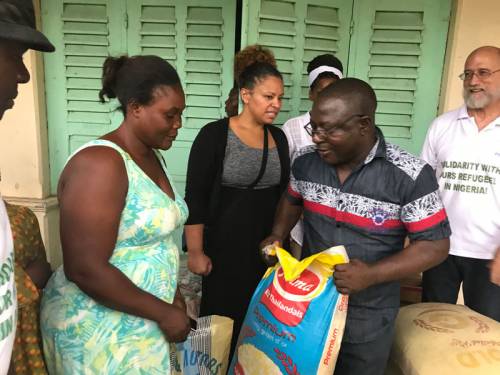 “It was very touching to be in that context and hear that a bag of rice, some canned tomatoes and a gallon of cooking oil could make such a difference. People were telling us this would feed their family for a month and a half.  Feeling like the church could be a presence was impactful. This didn’t look like the country I left nine years ago.”

Formerly the coordinator of the Joining Hands RELUFA Network (The Network for the Fight Against Hunger in Cameroon) and a Cameroonian human rights lawyer, Nodem joined the Presbyterian Hunger Program staff in 2011. He coordinates both the international development work of PHP and the global advocacy work of the Joining Hands Initiative. He still plans to return to Cameroon one day to live.

Jeff Boyd, World Mission’s regional liaison for Central Africa, has lived in Cameroon and now lives with his wife Christi, a fellow mission co-worker, in the Democratic Republic of Congo. Christi Boyd served as the PHP companionship coordinator, working with Nodem and RELUFA for 13 years. Jeff Boyd serves as a bridge between World Mission and its global partner, the Presbyterian Church of Cameroon.

“The moderator of the PCC has shared with me the ways the crisis is impacting the work of the church. Of 22 health centers run by the PCC, seven are non-functional. Presbyterian hospitals have been vandalized, and nurses and doctors are scared to go to work. Of the 1,500 congregations, nearly 1 in 10 are not able to function normally due to insecurity,” he said. “Fourteen of the 30 presbyteries are deeply affected. Only slightly more than one-third of the church’s 223 primary schools even partially opened their doors for the 2017-2018 school year. Eight of the 22 secondary schools were handed over to a local congregation for management and care. School buildings have been burned.”

Both men believe that only influence from and accompaniment by the international community can bring the factions together to broker a lasting peace. They ask Presbyterians in the United States to pray for the people of Cameroon and the work of our partners there.