Christmas Joy Offering – Supporting our leaders: past, present and future.
Make A Donation Click Here >
Home › No place like home 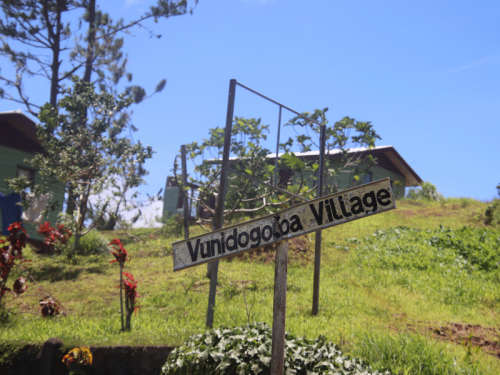 Vunidogoloa Village was the first in Fiji to have relocated because of climate change. (Contributed photo)

LOUISVILLE — No one spread a mat for Selai.

Born and raised in Vunidogoloa [voo-nē-dō-gō-lōah], the first Fijian community that was forced to relocate due to the impact of climate change, Selai [Suh-lī] felt unwelcome in her new home.

Although situated a mere 2 kilometers inland from the village where her loved ones were born, raised, married and buried, the new site might as well have been a world away.

“When I walked into the house, I did not find my mat,” she said, referencing the Pacific Islanders’ custom of welcoming family members and honored guests alike to sit at the same level on mats on the floor. “It felt like I don’t belong here.”

She is not alone.

Since 2014, the island nation of Fiji has had roughly four such relocations, including Selai’s home. According to Frances Namoumou [nah-moo-moo], the Ecological Stewardship and Climate Justice program coordinator for the Pacific Conference of Churches (PCC), the churches of the Pacific have envisioned worst-case scenarios, in which an alarming number of communities, just like Vunidogoloa, will have to relocate if the effects of climate change are not mitigated. The catastrophic impact of the Pacific islands’ cyclone season is a further contributing factor to the mounting number of necessary climate relocations. 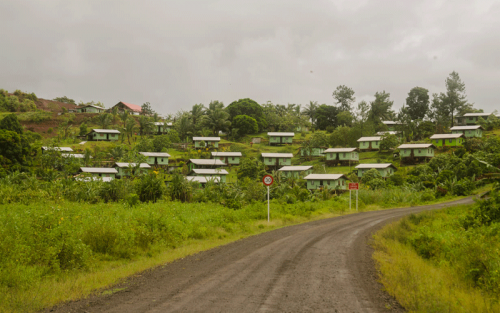 Since 2014, the island nation of Fiji has seen four of its communities relocated because of climate change. (Contributed photo)

While community members will do whatever is necessary for their survival, including relocation, faith-based organizations like the PCC are stepping in to assist displaced families, influence government policies, foster collaboration among agencies and raise awareness of the devastating impact of the world’s ecological crises.

The PCC’s call to peacemaking — including addressing the growing mental health concerns that result from the impact of climate change — is made possible by gifts to the Peace & Global Witness Offering, traditionally received on World Communion Sunday, which this year falls on Oct. 2.

The Peace & Global Witness Offering is unique in that half of it is directed to peacemaking and global witness efforts at the national church level to address critical issues around the world. Twenty-five percent is retained by congregations for local peace and reconciliation work, and 25% goes to mid councils for similar ministries on the regional level.

Part of the PCC’s work includes walking alongside such families as Selai and her husband, who were already well into their 80s in 2014 when the entire village relocated away from the coast’s rising sea levels. 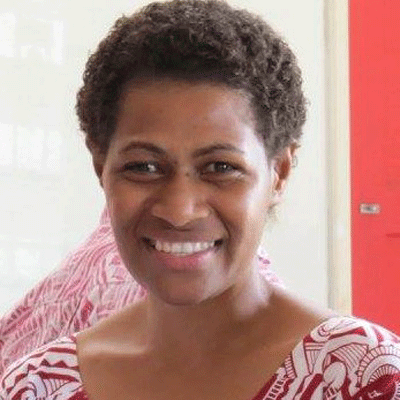 “When Selai sleeps in the night, she misses the sound of the waves breaking on the shore, the seabirds and the children swimming,” said Namoumou. “Her whole environment changed. She missed the familiar sights and sounds of her former community.”

But beyond that, Namoumou explained that for Pacific Islanders, their sense of identity is not only related to the self, but it is also more broadly understood as an extension of who they are in relationship to the land they walk and the ocean from which they get their fish.

“It is our calling both as a people — and as Christians — to take care of Creation and our impact on this planet,” she said. “It’s not like peacemaking is some foreign flower that was introduced to us so that we can see the connection between us and the environment. It has always existed in our culture and traditions.”

The Rev. Carl E. Horton, director of the Presbyterian Peacemaking Program, says that the program is increasingly called to focus on issues of migration and how the Commitment to Peacemaking can be applied to address the root causes that force people to relocate.

“We are learning firsthand from partners like Frances Namoumou and the PCC about the intersectional nature of climate change with militarism and migration,” Horton said. “While the Peacemaking Program has always worked to limit militarism, we are understanding militarism as a significant contributor to the climate crisis, especially in places like the Pacific Islands. We are also learning about the justice work of climate relocation and climate compensation for displaced persons in nations and regions most impacted by climate change.” 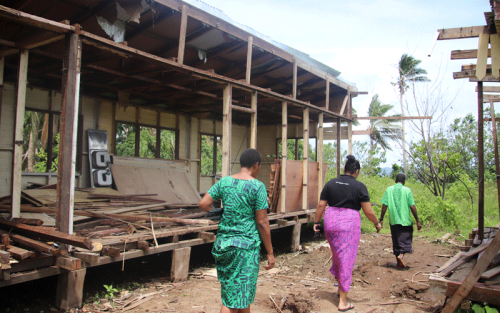 Climate relocation is a process that can unfold across many years. (Contributed photo)

Because climate relocation is a process that can unfold across many years, not only does the PCC initiate conversations with impacted communities well in advance, but they also continue to visit the residents of the relocated villages as part of their pastoral support and accompaniment work. In the case of Vunidogoloa, for example, the PCC began their discussions with members of the community as early as 2007 toward preparing them for their 2014 relocation.

Today, Namoumou and others still visit the affected families, like Selai and her husband.

“When you are working with the first community,” she said, “there are big lessons to be learned about how to do better in the future.”

Even in the face of a crisis of the size and the scope of climate change, Namoumou said that the average person —whether individually, or collectively as the Church — can still make a difference.

“We can be prophetic by speaking truth to power,” she said. “We can approach government and church leaders to change over to policies that encourage clean energy and reduce our carbon footprint. We can also look around and identify areas in the U.S. where people are affected by climate change. Where can we support and assist? If this is happening in big, developed countries like the U.S., just imagine what the scenarios are like in the Pacific.”

There are also a number of practical ways not only to stand in solidarity with Pasifika siblings, but also to take broader action to help stem climate change.

“If I have to give up driving a fuel-powered car, where do I spend the money that I save on gas?” Namoumou asked. “Can I give up the consumption of energy, either in my congregation or my own home? Can I partner with churches in the Pacific and other countries?”

Horton explained that such actions are all part of the ongoing call to peacemaking.

“The Commitment to Peacemaking includes ‘making peace with the Earth,’” he said of the popular resource that was introduced to the Presbyterian Church (U.S.A.) in 1983, “and describes that as ‘protecting and restoring God’s Creation through study, advocacy and environmentally mindful stewardship.’ The new Companion Guide to the Commitment to Peacemaking provides a curated collection of tools and resources to help Peacemaking congregations address climate change as their peacemaking commitment. Another excellent way for Presbyterians to care for Creation is by becoming an Earth Care Congregation.”

Namoumou is grateful for the PCC’s partnership with the PC(USA).

“I would like to say thank you,” she said. “If it weren’t for the funding we receive from the PC(USA), we would not be able to support communities like Selai’s and to help sustain a livable world for her family and all future generations.”

Give to the Peace & Global Witness Offering to continue this valuable ministry.