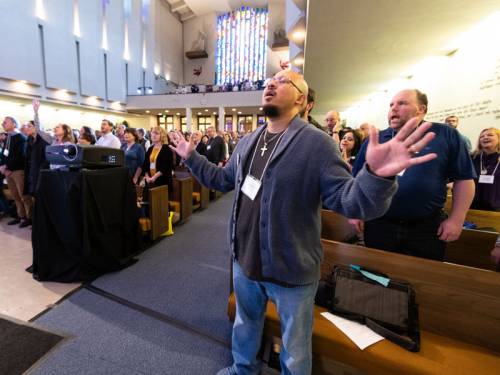 Glenn McCray sings during worship at the NEXT Church gathering being held through Wednesday at Seattle’s First Presbyterian Church. (Photo by Gregg Brekke)

SEATTLE — Meeting together since 2010 as a group dedicated to “vibrant theological discussion, spiritual growth and evangelistic courage” in the Presbyterian Church (U.S.A.), NEXT Church is gathering this week under its 2019 theme “Woven Together: Stories of Dissonance, Sacrifice and Liberation.”

The conference began with worship Monday morning, setting its theme within the story of Elimelech and Naomi’s journey to Moab. and Naomi and Ruth’s subsequent return to Bethlehem.

“Why did they leave and go to of all places an area that was despised?” asked the gathering’s opening preacher, Mary Ellen Azada, the executive director of Fuller Careers and Personal Development. “The Jews of the time considered all Gentiles to be dogs and one commentary say Moabites occupied an even lower position in Jewish thinking. It went all the way back to the way that Moab treated Israel on their way back to the Promised Land.” 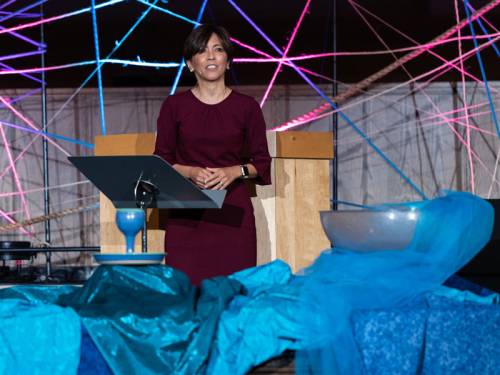 Mary Ellen Azada preaches during opening worship at the NEXT Church gathering  in Seattle. (Photo by Gregg Brekke)

Azada invited attendees to consider the reasons the family left Israel, possibly for economic considerations or because something shameful had been done that forced their departure. No matter the reason, she said, they found themselves as unwelcome strangers in a foreign land, where language and culture separated them from their neighbors.

“They were aliens, living in a land that viewed them as hostile and perverse,” she said. “Ask any immigrant who lives in a country that isn’t their origin of birth — it is a harsh reality filled with difficulties and anxieties.”

Upon their return to Bethlehem, Azada said Naomi and Ruth, who were without husbands, were not welcomed either. They had to  glean remnants from the field to sustain themselves while trying to become part of the community once again.

With strips of cloth given to each participant symbolizing the tight-knit communities, families, churches, organizations and countries, Tasha Hicks McCray asked, “Are they so tightly woven we don’t have room for others to be woven in? God laments when he looks down and sees us so tightly woven that we miss the stories and the people around us.” 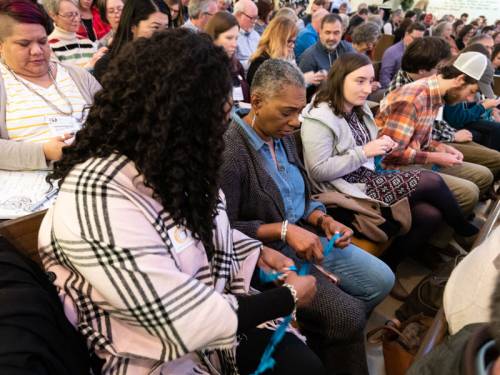 NEXT Church gathering attendees tie strips of torn cloth together to demonstrate new patterns of connection. (Photo by Gregg Brekke)

With this introduction, McCray asked worship participants to rip their strips lengthwise and then tie them together to demonstrate ways in which impenetrable social structures can be disrupted to allow new patterns of connection.

Adaza returned to the story of Ruth and Naomi, inviting participants to reflect on the attitude of those who are in the majority in a given culture. “Rather than asking ‘who is my neighbor,’ choose to ask the more important question, ‘to whom will I be a neighbor?’” she said.

With support from the Seattle Presbytery and the congregation that gathers at Seattle First Presbyterian Church, NEXT Church will likely be the last major event hosted at the facility where the church and presbytery are housed.

Announcing the intent to sell the entire block on which the building is located while simultaneously not dissolving the congregation, the Rev. Dr. Heidi Husted Armstrong, transitional pastor at Seattle First, said the congregation had given the community a “sneak peek of the kingdom of God,” with attendees who span a wide range of socio-economic, racial-cultural and education experiences. 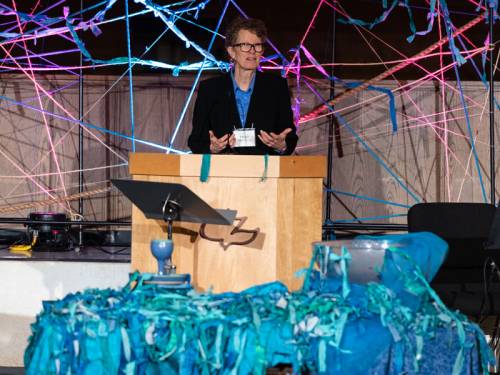 “I drive in every Sunday morning and pray, ‘Lord, let me be present to what you have for us today,’” she said, which on a recent Sunday included dogs in church and a “long-haired scraggly guy” introducing himself as Jesus Christ during the passing of the peace.

In a moment of reflection, Armstrong wondered if the words of Matthew 25 were being fulfilled among the congregation: “Lord, when did we see you hungry or thirsty or a stranger or needing clothes or sick or in prison, and did not help you?”

“I’ve never been more free to say I don’t know what I’m doing,” she said, noting the tradition of “solvitur ambulando” — it is solved by walking. “We’re putting one foot in front of the other and seeing where God will lead us through resurrection.” 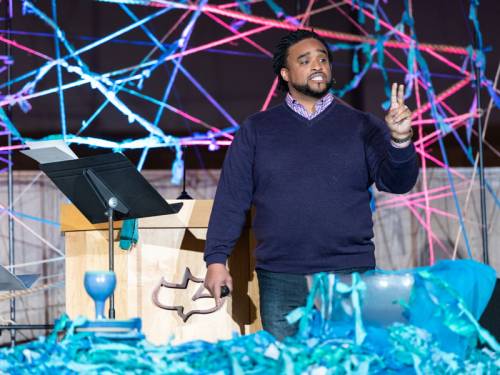 Speaking on multicultural learning on Monday afternoon and the tendency for people who live in the dominant white culture of the U.S. to ignore the influence of their cultural heritage, Tali Hairston, senior advisor for community engagement at Seattle Presbytery, said, “When we minimize culture, we’re minimizing creation — we’re minimizing how God called us to do this.”

“The only way we’re going to see is if you interrogate your own culture and your own self,” he said in concluding his keynote presentation. “Jesus became famous for telling his own people ‘you vipers,’ but then he went to Nicodemus and had a great conversation on salvation, he went to the Roman centurion soldier — the occupying force of Israel — and said, ‘I have not found greater faith, no, not even in my own town.’”

Hairston said we tend to do the complete opposite by interrogating others and affirming ourselves.

“Jesus says no,” he said, encouraging self-reflection “Insight precedes eyesight. And if you want to see the other clearly, you need to see yourself better.”

Nearly 30 workshops throughout the gathering draw on the “Woven Together” theme and will focus attention on how communities are responding to needs in and around their congregations including intergenerational ministry, race in the church, environmental needs, political dialogue, LGBTQIA ministry and others.