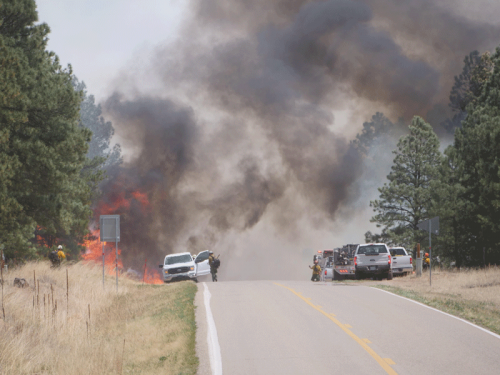 Hot shot crews monitor a fire in New Mexico as it bumps along Highway 434. (Photo courtesy of InciWeb)

LOUISVILLE — The Presbytery of Santa Fe and Presbyterian Disaster Assistance are keeping a close watch on destructive wildfires in New Mexico and lamenting losses to communities.

Wildfires have burned hundreds of thousands of acres across the state, resulting in the evacuation of tens of thousands. Hundreds of homes have been destroyed, according to the office of Governor Michelle Lujan Grisham. 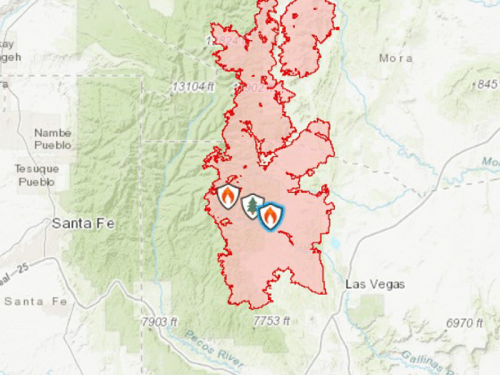 Since April 6, scores of firefighters have been battling the Hermits Peak/Craft Canyon fires, which have merged into one, covering more than 303,000 acres. It is now considered to be the largest fire in New Mexico history.

“It’s causing a lot of stress and anxiety and just what you would expect,” said Stephen Rhoades, Stated Clerk for the Presbytery of Santa Fe. “The billowing smoke is very high, very strong, very noticeable, and can be seen for miles and miles around. Everybody knows it’s out there.”

The presbytery is staying in contact with churches in the northern part of the state and asking for prayers for communities “dealing with the dangers and fears of wildfires” and for a couple of members in Las Vegas, New Mexico, who have lost their homes, the presbytery’s website notes.

“I don’t think any of our church buildings have been damaged, but our church members have been mentally affected — that’s for sure — and perhaps spiritually affected,” Rhodes said. “This is quite a momentous event in their lives.” 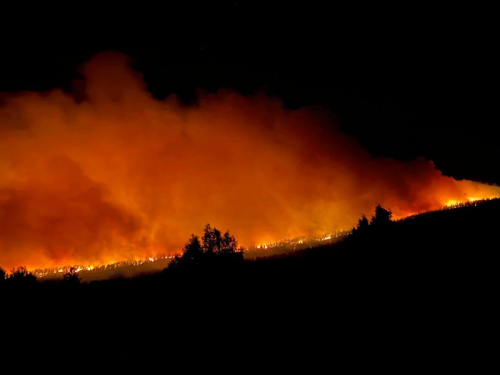 The Hermits Peak fire began as a prescribed burn by the U.S. Forest Service that got out of hand when multiple spot fires spread beyond the boundary. Winds have made containment difficult.

“When we shift from winter to summer and the jet stream goes right overhead, we get these spring winds that are strong, and that’s what’s really the engine behind these fires. It really pushes the fires in the direction of the winds,” Rhoades said.

The fires also have been adversely affected by the drought, “and the severity is just astonishing,” said the Rev. Jim Kirk, PDA’s Associate for (U.S.) Disaster Response.

But an official sounded optimistic in an update late this week on YouTube that referenced multiple fire zones.

“We all have one common goal and that’s to put this fire out,” said Carl Schwope, who commands one of the incident management teams and spoke during the briefing. The firefighters are doing “really great work,” Schwope said.

One of the areas that has been affected by the destructive fires is Mora County, where some residents’ families have lived for hundreds of years, Rhoades said.

“It’s a very sad event because people are seeing destruction of buildings and homes, and Mora County is a very economically depressed county,” he said. “You just wonder how they’re going to rebuild because I couldn’t even tell you how many people have or do not have insurance. It’s just a desert as far as jobs are concerned.”

For more information from the presbytery, go here. To support PDA’s response to wildfires, designate gifts to DR000165.