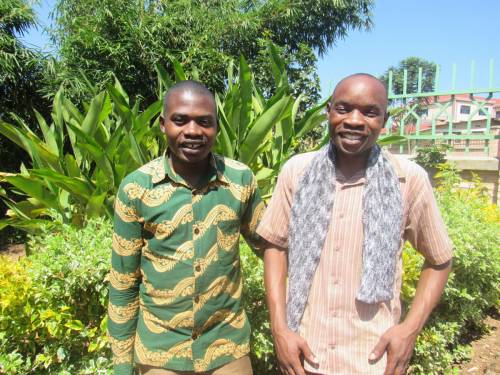 Jambo Ashimwe and Théogene Gasoro, students of mission co-worker Kay Day at the Protestant Institute of Arts and Social Sciences in Rwanda. (Photo by Kay Day)

NEW WILMINGTON, PA — “All of Rwandan identity and history is divided into pre-genocide and post-genocide,” said mission co-worker Kay Day during Friday evening vespers at the 2018 New Wilmington Mission Conference at Westminster College.

“Division has been part of our history,” Day said. “You see, before the Germans and Belgians came, there were two people groups. There were the Tutsi who owned cattle, and there were the Hutu who had land.

When the colonizers left, the Tutsi were in power. A new constitution was written, an election was held and — since the Hutu were 84 percent of the population, compared to 15 percent Tutsi and 1 percent indigenous Twa, also called the hidden people — the Hutu voted themselves into power and set about trying to systematically dehumanize and eliminate the Tutsi.

On April 6, 1994, while returning from a peacekeeping gathering in Tanzania, the plane carrying the presidents of Rwanda and Burundi, both moderate Hutus, was shot down and everyone aboard died.

The Hutu blamed the Tutsi, and immediately genocide broke out.

“In 100 days over 800,000 people were killed, and not killed by a militia army fighting back and forth, but rather by neighbors killing neighbors with machetes and clubs, as brutally as they could,” Day said. “The country was left in shambles; infrastructure destroyed.” The liberating force that came in from Uganda brought with them machine guns and bombs, and the military fought them while Rwandan citizens were killing one another.

“I want to tell you what’s happening in Rwanda today,” Day said. “And, I want to do it in the context of two of my students at the Protestant Institute of Arts and Social Sciences (PIASS).”

She added, “I want to tell you about two of my students because I think they epitomize what is happening in Rwanda today.”

The lone genocide survivor of his parents’ seven children, ThéogeneGasoro, is proud to be married to his beautiful wife, which means he is an adult in Rwanda society. Day showed a photo of the happy couple on their wedding day. She said shortly after they were married, Théogene developed lesions on his cheek, which were diagnosed as cancer.

When Théogene came to PIASS, which is near the medical school of the University of Rwanda, he visited the hospital and learned his cancer could be treated. Doctors told him it would be a slow process, about 18 months of chemotherapy injections.

“That meant he would live,” Day said. “We praised God for that.” Healing can be seen from the outside, she said.

According to the latest World Bank report released in early 2018, Rwanda is among the top 10 fastest growing economies in Africa. One of the country’s goals is to become the information technology capital of Africa.

Day said infrastructure is much better, agriculture is flourishing and there is main road access throughout the country. The capital city, Kigali, is “one of the cleanest cities in all of Africa,” she said. In part because Rwanda banned plastic bags in 2008 as part of its Vision 2020 goals for sustainability and, within a few months, it will also ban plastic bottles.

In addition to government-led improvements, Day said churches are at the center of small income-producing initiatives. Basket making and other handcraft micro-projects are helping women and families increase their economic resources.

“It looks very good on the outside, but my friends, there’s the inside,” Day said. “And that’s where my second student comes in.”

About a year ago a young man came up to Day after she preached a sermon on God changing our hearts and changing our identity, so we become new creations in Christ.

“Ntababazi Jean Baptiste said, ‘I want to change my name because I’ve been changed inside.’”

Day explained that naming conventions are different in Rwanda where there are no last names. “You have your Rwandan name and a baptismal name, and the Rwandan name is individual for each person.” Sometimes parents choose names based on what they want their children to be, or other times they may choose a child’s name based on the present circumstances they find themselves in at the time of the birth.

This student told her, “I want to be a pastor. How in the world can I go to a congregation and say, ‘My name is ‘Ntababazi.’ My name is ‘merciless’? I want to change my name.”

Day wanted to help, so she did some research and learned that changing a Rwandan name is a long and expensive process. First, Ntababazi would need to ask his parents’ permission to change his name. Next, he would need to complete the government forms, explaining that he had his parents’ blessing to have his name changed, pay $100 U.S., and pay for ads in the newspaper and local media to let anyone who might have a case against him know of his intention to change his name.

“This has taken a year,” Day said. “Two weeks ago, I got this joyful, joyful message from him saying, “It’s final. My name has been changed.”

She said, “He has gone from Ntababazi (merciless) to Jambo Ashimwe, which means ‘Praise the Lord.’ That is his new identity. It is his new name.”

“It is the long, slow process of changing hearts that is the difficult thing in Rwanda,” Day said. “It is at the heart of what I do with the Presbyterian Church of Rwanda and PIASS.”

—–
The New Wilmington Mission Conference runs through July 27. This year’s theme is “Love Your Neighbor” (Gal. 5:14). All events and mission network gatherings are free and open to the public. Learn more and register. For questions, contact conference staff at office@nwmcmission.org.

Recorded presentations from NWMC are available on its YouTube Channel. 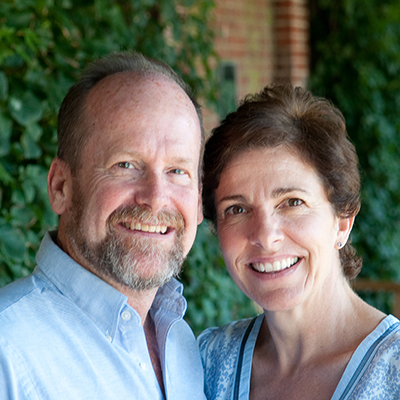