Share God’s love with our neighbors-in-need around the world through One Great Hour of Sharing.
Make A Donation Click Here >
Home › Mike Breen calls for church transformation from ‘consumer mentality into discipling culture’

ST. PETE BEACH, FLA – Midway through his plenary address this morning, Mike Breen—one of the world’s leading innovators in the church planting and discipling movement—asked his audience at the Go Disciple Live “Be the Light” evangelism conference a critical question, “Where are we going with this?”

Breen, who had begun his presentation perhaps somewhat enigmatically with a lesson on the Declaration of Arbroath (1320)—arguably the most famous document in Scottish history and “a central inspiration to the U.S. Constitution”—promised to demonstrate why that particular document and the broad sweep of history which preceded and followed it is of “enormous importance to what you’re doing in your church this week.” 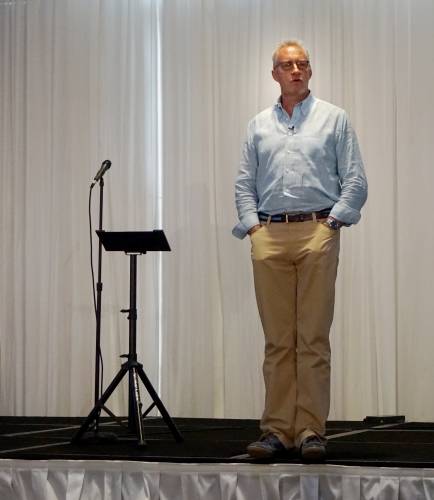 And, brilliantly, that is just what he did.

The Declaration of Arbroath, which called for Scotland’s freedom from the feudal lords of England, helped Breen to trace his assigned topic, “Spiritual Feudalism,” back to its very beginnings with Jesus’ pronouncement in Luke 22:24-27 as to which of the disciples would be regarded as the greatest.

“You’ve just celebrated the Lord’s Supper, so clearly the next thing on your mind is who is the greatest in the room,” said Breen, as he wondered aloud whether “guys jockeying for position” was a typically-male, after-dinner thing.

And although Jesus challenged what he was hearing among his disciples, Breen said that Jesus also understood that the way they were thinking was quite simply their context—the way that the world functioned.

“Leadership is not only about power, it’s also about provision—who holds the power and who provides the people with what they need,” Breen explained. “But Jesus said, ‘You are not to be like that. In the assumption of leadership, I want you to take the position of the most junior person in the household (oikos), who does not own what he or she puts on the table. I want you to only put things in front of people that God has put into your hands.’ It’s a radical way of thinking about leadership.”

After walking his audience through a brief history of the church’s first few centuries—when it was largely underground and subject to government-sponsored persecution—Breen cited the groundbreaking work of the sociologist, Rodney Stark, who analyzed the remarkable movement that resulted in over 50% of the Roman Empire becoming Christians by 313 C.E.

“The church had no buildings, no public leadership,” said Breen. “During 250 years of state persecution, the growth of Christianity was due to the strategy in which every disciple believed that one of their principal tasks was to make another disciple. Everyone was expected to be a ‘producer.’ Being a Christian always involves making another disciple.”

In the post-Constantinian era, however, Breen said that the leaders of the church who previously had neither visibility nor status became a part of the nobility. “Suddenly the leaders that were trained in the way of Jesus were inculcated into the world of power and provision,” said Breen. Churches were modeled on European feudalism, measuring their success by “how many peasants they have and how much tax they pay.”

The Declaration of Arbroath and the emergence of America, Breen said, were challenges to feudalism; and yet there was “a virus on American soil.” The “virus” of feudalism remained in the churches.

“Even the Presbyterians who don’t believe in clericalism operated as if the pastor was the feudal lord of the congregation,” said Breen. “The pastor was given power and provided—how did that happen? The metrics of feudalism are the metrics of the American church: how many peasants you have and how much tax do they pay. Those are the only things that are important.”

Members of such congregations, Breen maintained, “will never become ‘producers,’ only ‘consumers.’” Parking lot conversations among members, said Breen, center on whether and how church members are “getting fed.” If they’re not, they may go elsewhere.

“What have we done,” asked Breen. “We are followers of Jesus, and Jesus said, ‘You are not to be like that.’ The principal priority of Jesus is that everyone is a disciple making a disciple. [In this model], you’ll only ever produce consumers, not producers. The culture tells them as soon as they arrive that they are here to learn how to be a consumer.”

The solution for today’s churches—whether radical or not, said Breen—all goes back to what Jesus says, “You are not to be like that.”

The Go Disciple Live “Be the Light” Conference, formerly known as the Evangelism and Church Growth Conference, August 8-11, is a vibrant gathering of some 275 Presbyterians committed to disciple-making which leads to authentic evangelism, effective church transformation, justice, and church planting through 1001 new worshiping communities.