‘I want you to not miss out on your calling by ignoring what’s happening in the Middle East,’ says Lebanese pastoral resident 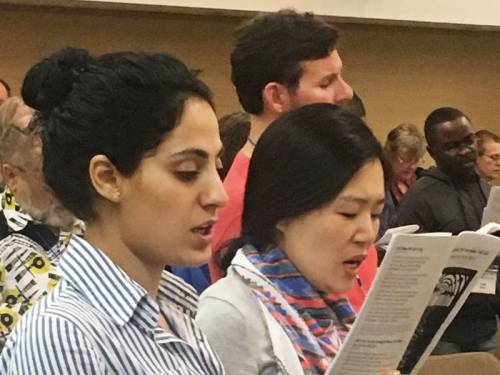 From Lebanon, where Christian Protestants make up only 1 percent of the population, Al Ashkar is in a pastoral residence in multicultural ministry at Parkview Presbyterian Church in Sacramento, California.

“The core of our Christian belief is to care for those who are marginalized in the world,” she said. “I want you to not miss out on your calling by ignoring what’s happening in the Middle East — where Westerners are violating human rights laws.”

Al Ashkar is in the U.S. on a worker visa. After completing her final year of theology at Princeton Seminary, she looked for a pastoral residency. Parkview pastor the Rev. Dr. Aart van Beek, a native of the Netherlands, and the Japanese-American congregation he serves wanted to build a new multicultural community of believers that would reach the growing number of Arabic-speaking refugees in Sacramento.

“Our church started by hosting those coming back from internment camps after World War II,” said Al Ashkar. “They lived in the sanctuary of the church.”

As Al Ashkar got to know these second- and third-generation believers, she recognized that they knew what it meant to be left out and to be vulnerable. The sense of Christian welcome is at the heart of their community.

“They want to help others who are experiencing what they experienced,” she said.

Al Ashkar is teaching English as a second language at a Sacramento ESL program for Syrian women to help them integrate into society. She also goes with Syrian families to doctor appointments.

In addition, she is starting to create cultural events for Arab women, with music and dancing, as way to fund her vision of creating an Arabic to English language center at the church.

“It gives them something to offer, in exchange for what people might give back,” she said. “It’s another way for them to assimilate while helping us fulfill our vision for this multicultural ministry.”

Al Ashkar is inviting other PC(USA) churches in Sacramento to help with these events. The next one will be held on Saturday, Nov. 17, at Davis Community Church.

Al Ashkar is also working on building a partnership with the Arab American Learning Center in Sacramento, where she offers services to refugees in ways that make them feel comfortable with who they are, without trying to make them something they’re not.

Her visa expires in May, but Parkview, which has extended her contract for another year and a half, is working on renewing her visa.

“We’re crossing our fingers,” she said. “I had a lot of fear initially about this. But after going back to Lebanon and returning, it’s as if God is making it smooth.”

Scared she wouldn’t get back in our country, she was prepared to answer all kinds of questions. But the custom agents were nice to her — and everything was easy.

Before finishing her theological studies at Princeton Theological Seminary, Al Ashkar spent four years studying at the Near East School of Theology (NEST) in Beirut, Lebanon. As part of her studies at NEST, she worked as a ministerial intern at First Presbyterian Church in Huntsville, Alabama, in 2014.

It was her first experience with the American church — at a time when Christians were being killed in the Middle East and PC(USA) churches were debating gay ordination. She vowed she would make a difference by sharing her knowledge as an Arab Protestant Christian from the Middle East.

“Through my experiences, I’ve fallen in love with ministry,” she said. “It’s helped me discern my call. I hope to help American churches realize how much they live in luxury in comparison to Christians in the Middle East and around the world.”

Al Ashkar is part of a diverse number of evangelism conference attendees that includes church leaders from 15 Korean, 15 Hispanic and seven intercultural congregations.