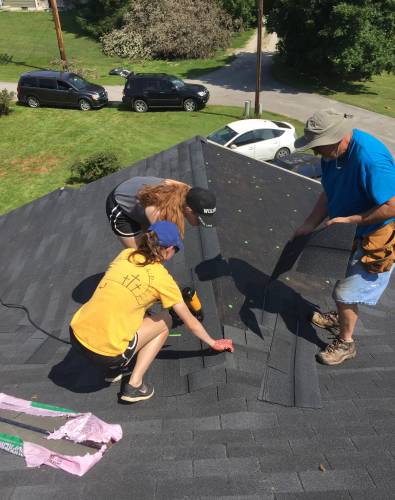 Many youth who stay at the Burnamwood Camp and Conference Center in Irvine, Ky., work to improve the lives of nearby people living in poverty. (Photo courtesy of Camp Burnamwood)

Young Presbyterians who enjoy camping and love spending time with friends in their church youth group have an opportunity during 2019 to do both — and help people who are living in poverty while they’re at it.

Robby Lear, executive director of the Presbytery of Transylvania’s Burnamwood Camp and Conference Center in Irvine, Kentucky, said the mission outreach camp to date has just three youth groups scheduled this summer. Generally, groups use their time at Burnamwood either to hold a retreat or to perform home improvements, from a new roof to the installation of a wheelchair ramp. The work is done on behalf of eastern Kentucky residents who can’t afford to hire a contractor.

Projects are often basic, Lear said. When camp staff found a nearby resident’s cabin constructed of particle board, campers made it more habitable by installing siding and weather stripping. Lear said the goal over the next decade is for campers to help improve 100 homes, “and we think we can surpass that,” he said. “If you get 30 people for a few days, you can knock out two or three homes if you get the right people with the right skills.”

As part of their stay, Burnamwood campers and their chaperones can also spend time with at-risk youth at Buckhorn Children’s Home. “We love stepping in there and helping out, hanging out with the kids or improving their facilities,” Lear said. “We read them stories, or we just play with them.”

According to its website, Camp Burnamwood is on a 500-acre stretch of land nestled between the foothills of Central Appalachia and the Kentucky Bluegrass. Established in 1958, it’s the official camp and conference center of the Presbytery of Transylvania. In spring 2012, the state of Kentucky recognized Burnamwood as a Registered Natural Area, deeming it a “significant component of Kentucky’s natural heritage.”

During the summer months, Burnamwood Camp and Conference Center works in conjunction with Burnamwood Appalachian Ministry. Summer mission directors arrange work sites and provide food for camp groups, which cook for themselves. Lear describes the experience as a “hassle-free mission trip for youth directors and a chance for participants to open their eyes to extreme poverty in America.”

The program at Camp Burnamwood is year-round, Lear said, “but we focus on the summer months, and we’d like to fill as many slots as possible. It’s a blast because of all the work we get done. It’s controlled chaos, and I love it.”

To learn more or to schedule your group’s time at Burnamwood, email Lear at info@burnamwood.net or call 859-494-9113.

Lord, thank you for experiences that open our eyes to more clearly see you and our ears to more clearly hear you. Expose in us those things that keep us from coming to you. Open our hearts and make us unafraid to be vulnerable. May we have encounters that will change us forever and move us in the direction where you are leading. Amen.