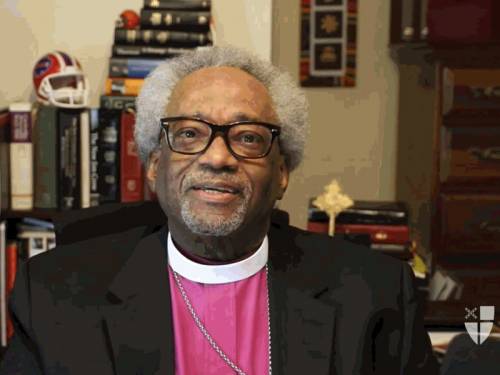 The Most Rev. Michael Curry, presiding bishop and primate of The Episcopal Church, preached Sunday during opening worship for Ecumenical Advocacy Days. (Screenshot)

LEXINGTON, Kentucky ­— The Most Rev. Michael Curry was at a meeting of Anglican bishops from around the world at Canterbury Cathedral in England, and one of the daily themes of the meeting was “the environment.”

In a group of 40 bishops, participants were asked to share what the impact of climate change had been in their countries. Most bishops from the Northern Hemisphere, particularly North America, were fairly quiet, Curry recalled. But the Bishop of Mt. Kilimanjaro in Tanzania recalled seeing the snowcap on the mountain as a boy. Now the snow is no longer there.

A bishop from Central Africa said growing seasons have changed and are not as plentiful as they once were. “I remember, most profoundly, the bishop from the Solomon Islands,” Curry said.

“He stood up and he spoke. He said, ‘The waters are rising.’ And he said, ‘Soon our homes, our island homes, will be no more.’ And then he turned and looked at those of us who are Americans. And he said, ‘America, we need your help.’”

The Solomon Islands was the site in the Pacific Ocean where then-Lt. John F. Kennedy and his crew were patrolling when a Japanese destroyer smashed into the boat, splitting it in two. Kennedy and his surviving crew were rescued by Solomon Islanders who helped reunite the men with the U.S. Navy. Kennedy later invited two of his rescuers to his presidential inauguration in 1961, and there is now an island in the chain named for Kennedy.

“We saved him and his sailors because we were your friends,” Curry recalled the bishop saying. “Now we need you to be our friend.”

Curry, the current presiding bishop and primate of The Episcopal Church, told the story in his sermon Sunday during opening worship of Ecumenical Advocacy Days (EAD) 2021, which are being held virtually through Wednesday. The event is a national education and advocacy event for Christians from a variety of traditions and their partners. The opening worship reflected that diversity of traditions through word and music, including Presbyterian Church (U.S.A.) participation, under the 2021 conference theme, “Imagine: God’s Earth and People Restored,” putting the increasingly urgent threats of climate change front and center.

“Imagine a new heaven and new Earth, God’s Earth and people restored,” Curry said at the end of an opening riff on the conference theme. “Imagine. It may not seem like it, but your work of climate justice and to advocate for that is part of God’s grander vision and God’s grander intent and mission to bring an end to what is often a human-created nightmare and to realize God’s dream for the human family, and the entire family of Creation.”

Curry, who may be best known for his sermon at the 2018 royal wedding of then-Prince Harry and Meghan Markle, invoked a familiar Scripture, John 3:16, and a song.

“And we who follow in the footsteps of Jesus are summoned to love as God loves. The work for climate justice is helping us to love the world as God loves the world. But the truth is, this is God’s world. You know that wonderful, old spiritual, ‘He’s Got the Whole World in His Hands’? I used to think that means he controls what goes on in the world. Now, I don’t think it means that, no. There’s an element of freedom that is part of Creation. I’ve come to realize that he’s got the whole world in his hands is to say that this world is connected. It’s a part of a greater whole, a greater whole that is upheld in the hands of a loving God.

“He’s got you and me, brother, you and me, sister. He’s got the whole world in his hand.”

Going into the story of the bishops’ conference and appeal for friendship to address climate change, Curry invoked another great preacher, the Rev. Dr. Martin Luther King Jr., saying, “Injustice anywhere is a threat to justice everywhere.”

Other spots in the service addressed justice issues illuminated by the COVID-19 pandemic, which caused the cancellation of last year’s EAD gathering. The Rev. Dr. Sharon Austin, director of connectional justice ministries for the Florida Conference of the First United Methodist Church, delivered a stark recitation of her “Racism During a Pandemic.”

Austin took on several popular American slogans such as “land of the free” and “home of the brave,” detailing how they only apply to a privileged few.

“The world reminds us of the hypocrisy of our human rights,” Austin said. “Deplorable. Unfathomable. BIPOC hear the constant clamor of First Amendment rights to open and unmask while at the same time listening to statistics stating that they are at greater risk of contracting and dying of the coronavirus. Sounds like planned BIPOC genocide, again.” 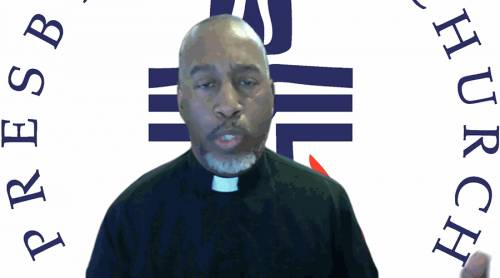 The Rev. Jimmie Hawkins, Associate Director for Advocacy for the PC(USA), closed worship Sunday with a sending. (Screenshot)

The service included a multilingual prayer of the people and music from a variety of traditions, including Korean drumming.

The Rev. Jimmie Hawkins, Associate Director of Advocacy for the PC(USA), brought the opening service to a close with a sending.

“As you go out rejoicing, encounter the Creator, who waits to meet you there,” Hawkins said. “Savor Creation’s richness and diversity and live as those who praise God for its bounty.”