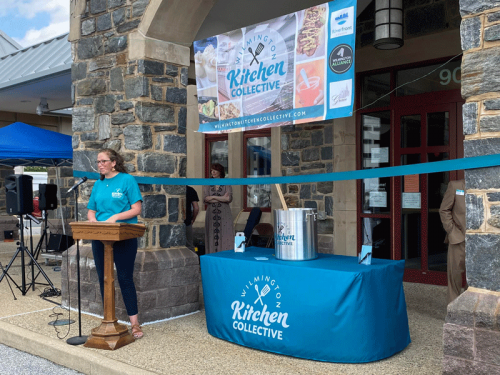 The Rev. Chelsea Spyres, executive director of the Wilmington Kitchen Collective and pastor of the Riverfront Church, speaks during last month’s grand opening of the commercial kitchen space, which is housed in Grace United Methodist Church in Wilmington, Delaware. (Photo by Cindy Kohlmann)

LOUISVILLE — In locations across the country, PC(USA) churches and mid councils are finding ways to transform otherwise humble church kitchens into spaces of ministry, mission and community engagement.

One such fertile space is in Wilmington, Delaware. Last week, the Rev. Cindy Kohlmann, connectional presbyter for New Castle Presbytery, hosted an online discussion with the Rev. Chelsea Spyres, executive director of the Wilmington Kitchen Collective and the pastor of Riverfront Church, a new worshiping community in Wilmington. Watch their conversation here.

Riverfront Church meets outdoors in good weather and in restaurants and bars when the weather turns cold or rainy, Spyres said. People who attend “describe Riverfront as a space of rest, community and table. We’ve really been grounded in food from our beginning, but we were never really sure what that was going to look like missionally,” she said. A few years ago, the Wilmington Alliance, a community partner, came to Riverfront’s pastor at the time, the Rev. Edwin Estavez, “and said we have this idea for a community kitchen, a shared kitchen space,” Spyres said.

Organizers approached Grace United Methodist Church — Spyres’ denomination as well — who said, “We have the space, but we don’t have the people. The Wilmington Alliance said, ‘We have some funding,’ and Riverfront said, ‘We think we can get some additional funding and we are willing to invest a staff person part time to this mission.’ That’s where I came into the picture,” Spyres said. “I was that part-time staff member.”

For a year or so, “we did a lot of grant-writing … It was a slow and hard process,” Spyres said. Eventually the team secured enough money to rebuild the Grace kitchen to bring it up to code. In January, the local health department gave its final approval, “and we were officially open.”

Spyres said 60 Wilmington businesses are now on a waiting list for shared commercial kitchen space. “We’ve just announced we are opening a second site,” Spyres said. “We’re really amazed at the way the Spirit has been working.”

The space exists “for folks in the start-up or dreaming phase of what their business could look like,” she said. “The business development and economic support is important to us because we have heard over and over again from our entrepreneurs that space is not enough. To launch and do business well in the startup phase, they need more support and resources,” including micro grants and business development coaching.

“We are not business experts,” she said of Wilmington Kitchen Collective. “But we have a lot of connections in the community. We are more than a kitchen space.”

WKC has delivered services and workshops that entrepreneurs have told them they need. Among them: food photography and styling workshops. Using only their smartphone cameras, entrepreneurs “saw their pictures transformed” by the end of that workshop, she said.

The Delaware Small Business Development Center offers coaching, and each entrepreneur has a caseworker to help develop a business plan and check in periodically. WKC has also arranged for training sessions in social media use, marketing and accounting.

“It’s a real community,” Spyres said. “We try to make sure our entrepreneurs know that when they win, we win.”

WKC celebrated its grand opening in recent weeks. More than 200 supporters turned out to express their appreciation. 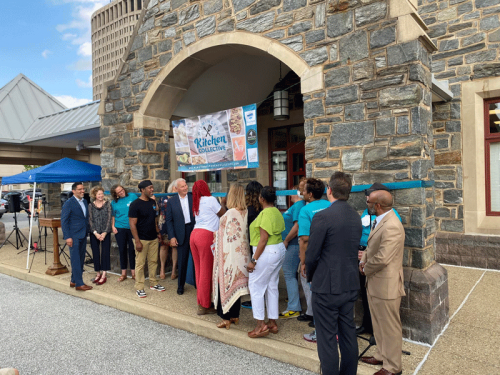 “The Wilmington Kitchen Collective gives me the opportunity to expand my menu to offer new items to customers,” one entrepreneur said in a testimonial. “Being part of the collective, I am excited about working with other businesses to partner for events and collaborate on new business ventures … I’m looking forward to new adventures and vendor relationships that will develop.”

“It’s refreshing for entrepreneurs to be in a space where they’re rooting for each other,” Spyres said. “It means working together and sharing kitchen space — and being patient when someone is running over time or forgot to wipe the counter down properly.”

One of the questions Spyres gets frequently is, how is this church?

“We are investing in our neighbors who might not typically find belonging in the church … They may have catering jobs on Sunday morning or have been out late on a catering job on a Saturday night. It’s such a gift to have this list of people who call me their pastor and who call Riverfront their church … Because we are more than just a kitchen space, they text me when they pick up a new catering job. They text me when they know another business [owner] is stressed. This community is building and beginning to share with one another in really vulnerable ways that it’s church, and church in its best form. It’s not something we envisioned or imagined for ourselves.”

Kohlmann and others on the call expressed appreciation for the innovation they had just witnessed.

“This turns what we see as traditional church metrics on its head,” Kohlmann said. “In the Presbyterian Church we talk about building congregational vitality, eradicating systemic poverty and dismantling structural racism. But we still like to count the numbers, the people in the pews, the number of dollars in the bank — which are not true measures of vitality, much less true measures of mission.

“What the Wilmington Kitchen Collective is saying is that it’s not about cramming in as many food entrepreneurs as possible until they’re tripping over one another. Instead, the vision is to embrace each person in their dream and walk alongside them so they can be more fully the person God is calling them to be. It won’t result in mass numbers of people coming to church on Sunday — except for when the kitchen collective sponsors the potluck!”