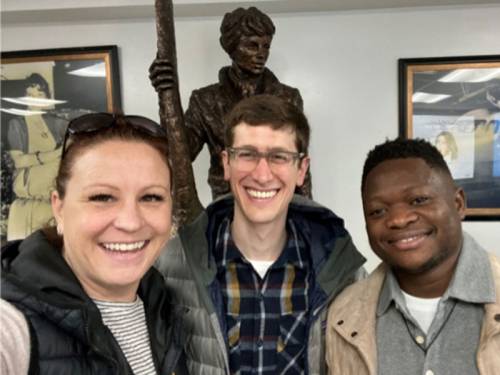 Editor’s note: The Rev. Wendy Tajima, executive presbyter of the Presbytery of San Gabriel, wrote this story for the presbytery’s recent newsletter about a young man from Cameroon named Bertrand. Bertrand is university-educated, a devout Catholic (he made his own rosary out of thread while at the detention center in Adelanto, California), and was working with youth for a non-governmental organization (NGO) when he was warned that the government had targeted him. He left Cameroon on April 10, 2019, spent five months going through Latin America and then five more months at Adelanto, which is housing migrants not only from Latin America but also Africa and China. He was released on February 12, 2020.

Presbyterian Disaster Assistance began partnering with the presbytery in 2019 to support its new ministry organizing congregations to accompany asylum seekers. In sharing this with PDA, Tajima said, “This story gives a very specific picture of how your generous grants impact people’s lives, with the tremendous support of several of our member churches. There are so many other stories of people taking initiative to show care, faith, and solidarity with the migrants in our areas. This is just one.”

TEMPLE CITY, California — Last week I mentioned that Steve Wiebe, executive pastor of Pasadena Presbyterian Church (PPC) and I were on our way to Adelanto Detention Center to be at a court hearing for our Cameroonian friend Bertrand. We met Bertrand in November 2019, during a group visit coordinated by our Immigrant Accompaniment Organizer, Kristi van Nostran.

Upon our arrival, we felt positive because there were only two cases scheduled for that courtroom that morning. The first case was a father of three daughters. His wife had come to the United States from El Salvador with the two elder girls long ago, and now they are all U.S. citizens; the third daughter was born here. The father came in without documents to join them and was detained. This was to be his last court hearing, and the oldest daughter said they expected to hear either that he would be released or deported.

After four hours of tense waiting, the family came out in tears. They said the judge, who was “mean,” told them they had to come back in March for another hearing because they didn’t have all the documentation in order.

Because this man’s hearing was lengthy, Bertrand’s hearing was rescheduled to the next day. Unfortunately, neither Steve nor I could come on Tuesday, so not only was Bertrand going to court without an attorney, he also had to go without supporters. But he is a very resourceful person, so had spoken with friends about how the hearings go, and he had Scripture, so he kept the following text in his heart and his mind:

[Jesus said,] “When they bring you before the synagogues, the rulers, and the authorities, do not worry about how you are to defend yourselves or what you are to say; for the Holy Spirit will teach you at that very hour what you ought to say.”  Luke 12:11-12 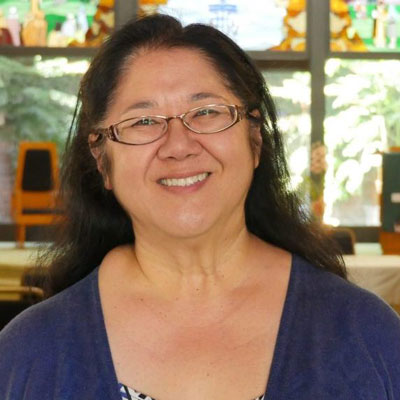 The Rev. Wendy Tajima is executive presbyter for the Presbytery of San Gabriel.

The evening following his hearing — during our San Gabriel Presbytery Executive Commission meeting — I got a call from Bertrand. He said the judge apologized to him that his hearing was delayed, and then asked some questions based on his declaration, especially about the NGO he worked with. They used a web search to confirm the legitimacy of the NGO, and his connection with it. The judge said she was sorry that she was banned from granting asylum, and gave him another status that prevents his deportation, with her own blessing that God continue to guide and protect him. Because Bertrand waited in Tijuana (for three months!) until the Border Patrol allowed him in, he did not have to pay any bond, and was to be released the next day!

Bertrand called again the next day, during our Wednesday presbytery staff meeting. Now it has been said (certainly not in THIS presbytery) that there’s no need to contribute to shared mission giving, because it only goes to pay presbytery staff, and what do they do with their time, anyway? So let me share what your staff and presbytery friends did in the second half of this last week.

Bertrand was being released that afternoon, and it was expected for someone to pick him up by 6:30 p.m., at Adelanto. He had heard about a group who was arranging for pickups, but he couldn’t reach them. Immigration and Customs Enforcement gave him one (completed) office phone call, and that ended up being me. Now it was 4 p.m., and given east-bound rush hour traffic, we knew it would take 2.5 hours just to get there. And here’s my confession of my Californian bourgeois life: not only were my dogs at the groomers, my little electric car didn’t have enough battery power to get to Adelanto!

Kristi started organizing for the release and gave us the voice of experience. Aew staff member, Presbyter for Administration Ally Lee, gave me her car key to drive to Adelanto and offered to house Bertrand. And thank God for family as well as staff, as my nephew agreed to pick up the dogs.

Hitting the road immediately, I got to Adelanto right at the time of Bertrand’s release. By then it was 42 degrees in the high desert, and Bertrand was wearing a sweatshirt that Adelanto gave him. His bag had been taken in Tijuana the night before he was allowed entry into the U.S., and since they took him straight to Adelanto, they gave him clothing and toiletries during his detention — but who wants a prison jumpsuit in public, and they wouldn’t let him take his toothbrush. Instead he was released with a white plastic trash bag with the jacket he was wearing when he came in, his Bibles and little else.

That Thursday was busy and he spent the day with Steve. I have to share the sweetest moment when we arrived at Pasadena Presbyterian Church. As Bertrand and I walked into the office, Elder Ellen Harkin was volunteering at the front desk. She smiled and said, “You must be Bertrand! Welcome!” It was like the voice of heaven blessing Bertrand, and I got to witness it.

The only thing Bertrand asked for was a haircut. Ally knew that the chair of the immigrant ministry team at Knox Presbyterian Church in Pasadena is a barber, so she and Steve arranged to get his haircut, as well as other needed supplies. Kristi contacted the circle of support organizations to arrange for Bertrand to get a cell phone and a ticket to North Dakota, where his sponsor lives and where he needs to report next week. Kristi got him a ticket through Miles4Migrants, a non-profit that works with people who donate their unused frequent flyer miles. And Steve and Kristi got to witness the heartwarming phone call when Bertrand spoke with his sponsor, his half-brother who had somehow settled in Grand Forks, North Dakota. Kristi and Ally’s husband Brian Lee, a member of Knox’s Immigrant Ministry Team, took him to the airport on Saturday, saying farewell as he left for his new life.

Through the lens of this one person among thousands, I hope you get a glimpse of this largely invisible network of people seeking to offer welcome and safe passage to so many. Last week I mentioned the Refugee Ministry Team at Claremont Presbyterian Church, who have been active in this network, as has Knox. I know that First Presbyterian Church in Pomona and Mideast Evangelical, as well as all our Latinx churches, have given safe harbor and support for people fleeing violence in the Middle East and Latin America. And for Bertrand, I thank God for the people of Knox and PPC, and for my staff colleagues of San Gabriel Presbytery. Thank God for Presbyterian Disaster Assistance, whose grant pays for Kristi’s work, and for Pacific Presbytery, who helped us get the grant. Thank God for all of them and thank God for your support. And continued prayers for Bertrand as he settles in his new home, and for all who are still seeking family and safety in this world.

Bertrand landed safely in North Dakota and sent a note of thanks, saying:

I kind of really lack words with me now to express the joy and appreciation for my current mode. I can’t tell how thankful I am for your support during one of the most difficult challenges I’ve had to face. Thank you doesn’t seem like big enough words to say but know that I am very thankful for the support of you all and I have a lot of kindness to pay forward in the days ahead. I am grateful that I have more healthy days ahead to look forward to especially with family reunion with my brother up at North Dakota. You all mean a lot to me now and form part of a family and core of me which I can’t really explain … I pray you all continually remain blessed and continually being enriched with God’s blessing for all the good works you have been doing. THANK YOU.

To learn more about what families and children encounter at the U.S./Mexico border, please visit the Presbyterian Disaster Assistance website for more information.

To support these and other Presbyterian-connected ministries, donate to DR000095 US Refugee Emergencies. PDA has already released several grants through presbyteries in the region and will continue to do so as funding is available.

The Presbyterian Church (U.S.A.) is part of an interfaith coalition working together to restore U.S. asylum. Faith4asylum has resources for you to learn, teach and advocate for a just and fair U.S. asylum system.