Cancellation comes amidst concerns about Palestine/Israel 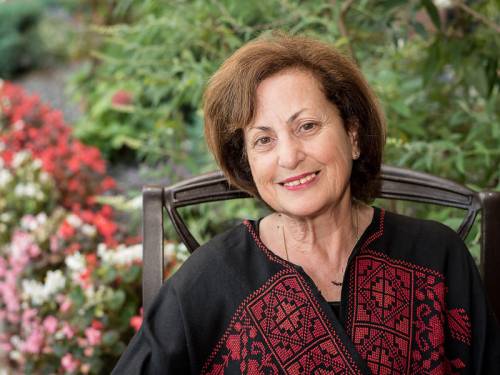 LOUISVILLE – An international peacemaker from Palestine recently found her invitation to speak at two Nebraska high schools revoked. Nora Carmi, a Palestinian Christian from Jerusalem, was scheduled to speak at two schools in Omaha, when school district authorities cancelled the appearances. Millard Public School officials say the decision was made after being contacted by some parents.

Carmi, a noted lecturer and experienced peace worker, is one of 15 international peacemakers visiting churches, schools and other institutions across the country this month. The visits are coordinated by the Presbyterian Peacemaking Program. Local committees determine the specifics/settings for the speakers’ schedules.

“Nora comes to us as highly qualified and experienced. Her life’s work has been centered in Jerusalem, a city that is home to Christian, Jewish and Muslim faiths,” said Carl Horton, coordinator of the Presbyterian Peacemaking Program. “She continues to seek peace for all who call the region home.”

Until her retirement, Carmi, a 70-year-old grandmother, worked with the YWCA of Palestine. She has also worked with Sabeel Liberation Theology Center and Kairos Palestine. School officials say there were concerned the students would only get one side of the Israeli/Palestinian conflict.

“It hurts my heart. We were delighted to have the schools sign up. I had great hope that the second school would go on with the program,” said Sandie Hanna, a member of the social justice and peacemaking committee of the Presbytery of Missouri River Valley.  “I think the relationship with the schools is not damaged.”

Hanna was among those who took part in the PC(USA)’s Mosaic of Peace trip to Israel/Palestine in 2014. She says the visit gave her a better understanding of the conflict.

“I’m a teacher and my job is to educate people by letting them hear the other side of the story,” she said. “Its knowing the background of the stories that helps us understand the present day issues.”

“The committee has a long history of participating in the Presbyterian Peacemaking Program. The peacemakers that have come to the presbytery have been exemplary in their peacemaking skills and have embodied the good news of the Prince of Peace,” said Rev. Rick Sleyster, chair of the social justice and peacemaking committee. “Nora has been inspiring and has connected with people at a very basic level and has been intentional about communicating peacemaking efforts. She has an engaging personal style that speaks from the heart and is a witness for peace. Our hope is the polarization around this visit will lead to reconciliation.”

Carmi has already visited a number of churches, colleges and other institutions over the past two weeks.

“I’m sad, not angry. This is a lost opportunity for those who are afraid to hear the truth, to really hear from a Palestinian person who has been working for peace,” she said. “For years, I’ve traveled around the world in hopes of finding a way to really bring peace to a land called Palestine and Israel.”

Carmi has visited Creighton University in Omaha and other colleges with young people in the audience and she says she’s encountered no problems.

“Young people, especially those in high school, can still decide what the future is going to be,” she said.  “I know these are difficult times. But I believe people are strong enough to understand what is right and wrong. I wish I had an opportunity to speak to the parents who had objected. I wish they had given us a chance for the children to start thinking about these issues.”

Carmi says she wishes people could hear from Palestinian youth saying, “No matter how oppressed they are, they can dance, sing and write poetry. People need to see that. We are a people who believe we were created to live, not die.”

Carmi and the other participants will return to Louisville the week of October 16th to debrief with Horton and other church leaders. Other countries represented by the 2017 peacemakers include Guatemala, Italy, Kenya, Malawi, Mexico, Myanmar, Northern Ireland, Pakistan, Philippines, Sierra Leone, South Sudan, Sri Lanka, Ukraine and Vietnam.