Make A Donation Click Here >
Home › ‘If you don’t tell your story, someone else will tell it for you’ 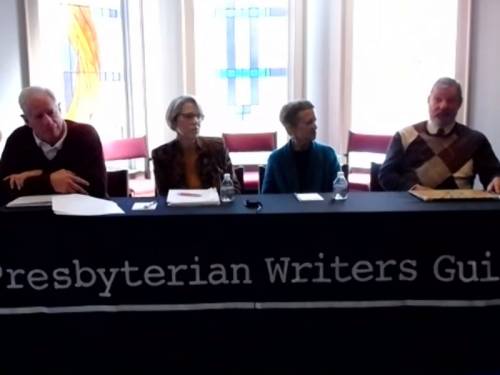 LOUISVILLE — Giving seminarians the tools and the confidence to use their access to the media effectively once they become pastors or do other ministry was the task at hand Wednesday for five Presbyterian communicators speaking at Columbia Theological Seminary during a talk and webinar titled “The News and the Good News: The Impact of Ministry on Journalism.”

“If you don’t tell your story, someone else will tell it for you,” Duffield told seminarians. “It’s important for us to be able to tell the story of Jesus and the church at work in the world in ways that don’t grab headlines from secular journalists.”

Repeating advice she’d once been given, Odom cautioned that “just because there’s a new platform doesn’t mean you need to jump immediately on it. Wait, be patient and take care to exercise your voice. Consider the ramifications of what you’ll be publishing.”

Telling a story well “helps people remember your point long after you’ve made it,” Stimson said.

Social media continues to change the way that news is compiled and delivered, panelists agreed. While the rapid growth of online sources “allows for the spread of rumors, I think ordinary human beings can discern who the reliable sources are,” Lancaster said.

Van Marter said the dominance of social media has hammered home the need for brevity. He recalled a workshop led by a Chicago Tribune reporter who told participants they had 15 minutes to write 25 words or fewer on the history of the Protestant Reformation.

“Some of the things people came up with were astounding. It always stuck with me,” he said. “You can still learn to boil stuff down to its essence.”

As she works with church communicators, Odom has taken to heart what she once heard during a workshop: For the local newspaper or TV or radio station, your church’s anniversary is not necessarily newsworthy.

But turning a lens on the important work getting done at that same church can end up on Page 1, she said.

One church celebrating its 60th anniversary had long been working with the Lost Boys of Sudan, boys displaced or orphaned during the nation’s second civil war.

Odom interviewed a church ruling elder and a Lost Boy and submitted an article as a dialogue piece — and by the way, she noted briefly in the article, this in a church celebrating its 60th anniversary. The story was indeed front-page news.

“We’ve got to find ways to tell the story as a human-interest story,” she said.

Don’t hesitate to use sources at hand, Stimson said.

“The Presbyterian Church has a lot of resources and contacts with people all over the world. They can offer viewpoints on immigration and gun violence, issues that are crucial today,” she said. “They’re viewpoints from people who are on the ground, working with immigrants or churches in war-torn areas, and they’re offering up alternatives to what the government is putting out.”

“The church is clearly less influential today,” she said, “but I think people who vote still trust the voices of church leaders. We want to get viewpoints out that are consistent with the gospel we are preaching.”