Presenters discuss findings of PC(USA) study at the 61st CSW 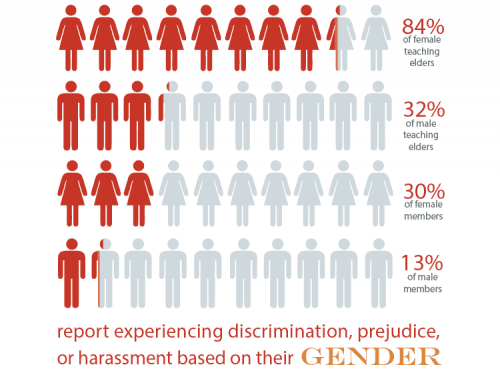 Coe pointed out that while women represent a larger percentage of the population of the church they are under represented as ministers and furthermore the 2016 PC(USA) study on Gender and Leadership highlighted the fact that as many as 84 percent of the female teaching elders feel they have experienced some form of sexism.

Coe began the presentation by asking the audience to take part in a brief survey to learn if the women in the room had firsthand knowledge of any of the same experiences the denomination’s gender and leadership study exposed.

As Coe continued with her presentation, she shared quotes from women in church who participated in the survey.

“Women of all ages and roles in the church participated in this survey,” Coe said. “We surveyed female deacons, elders, pastors and volunteers. We wanted to include every position of the church. As important as this work is, we still experienced a great deal of resistance to the survey.”

According to the findings, 48 percent of men and about 41 percent of women disagree with the statement that “gender inequality is still a problem in the PC(USA).” Coe said these findings are likely because the problem is less pervasive among lay members. Only 30 percent of women and 13 percent of men report experiencing gender discrimination, harassment or prejudice. Still, Coe reminded the audience that these numbers should be zero.

Coe and Andriot shared the following quotes from survey participants:

Another quote was even more expressive of the divide, saying, “Some use gender as an excuse for their ineffectiveness in ministry. Others spend too much time on surveys and trying to make issues more important than the work of the church. If you need something to do—go volunteer!”​

When asked where do we go from here Coe said, “We now have data to expose the problem; the next step is consciousness raising. You cannot mobilize people for change if they don’t agree that there’s a problem.”

Adriot said, “Our job is to serve as a resource to those wanting to make a change in the church and to help the church truly become God’s beloved community for all.”