Building a Life of Faith. Support the Pentecost Offering..
Make A Donation Click Here >
Home › Having patience and hope in hard times 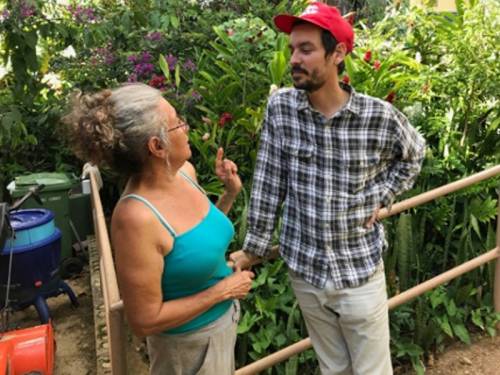 LOUISVILLE — For Magha Garcia, farming is how she honors her ancestors.

“Everything I learned about agriculture came through my great-grandparents, grandparents and parents,” she said. “These people worked so hard, and what they were paid for their crops was so little, it makes me really sad.”

Garcia, who was born in the mountainous central region of the main island of Puerto Rico, was raised and educated during a period in the archipelago’s history when families wanted to send their children off to college rather than watch them endure the hardships of the farming life. But Garcia found she wasn’t truly happy until she came to the realization that her place was on the farm.

“Because I grew up in a family where we produced almost everything we needed, I’ve always been drawn to nature,” Garcia said. “It’s nature who really plans your calendar and designs your day.”

Yet as nature veers more and more off course due to the mounting impact of climate change — which Germanwatch’s Global Climate Risk Index 2020 shows as having affected Puerto Rico for the period from 1999 to 2018 more than any other part of the world — the life of the family farmer in an economy and culture deeply rooted in agriculture is increasingly under siege.

The especially dire conditions in Puerto Rico following Hurricane Maria in 2017, which still threaten not only the livelihood of its farmers but also the commonwealth’s hope of achieving food sovereignty, prompted the One Great Hour of Sharing Offering’s three Presbyterian Mission Agency partners — the Presbyterian Hunger Program, the Presbyterian Committee on the Self-Development of People (SDOP) and Presbyterian Disaster Assistance (PDA) — to send a delegation to the archipelago in December 2018. Of the many initiatives and organizations working there to increase agricultural self-reliance, Organización Boricuá de Agricultura Ecológica de Puerto Rico is the major player in coordinating this effort..

Organización Boricuá [Bor-ē-qwa], a grassroots network of farmers, agricultural workers, educators, organizers and activists, serves to promote and practice agroecology as a means of achieving food sovereignty and environmental justice on the archipelago.

Founded some 30 years ago by members of the community with diverse skill sets, from different backgrounds and from both rural and urban areas, the organization takes its name from the Indigenous word for the islands of Puerto Rico, Borikén.

Jesús Vázquez Negrón, Boricuá’s general coordinator for the past four years, has been associated with the organization for more than 12 years, harking back to his days as an environmental justice organizer and law student at the University of Puerto Rico with a concentration in public policy and practicing agroecology in rural farms and urban gardens.

Vázquez defines agroecology not only as a science, but also as “an agrifood system — a social movement and a way of life that interacts within environmental and social contexts providing a space to learn, honor and share our ancestral practices that are based in sustainability and at the same time serving as a platform to organize collective power through community and mutual support work.” 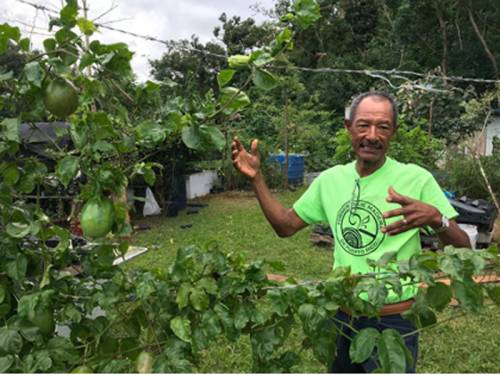 Carlos Cruz, co-founder of Finca NOA farm in Toa Baja, shows off his passion fruit orchard, which has become one of the main crops after hurricanes wiped out their row crops. (Contributed photo)

“Our food system needs to be controlled by the people, not by a few multinational companies that want to keep exercising that control at the expense of life,” said Vázquez. “In doing the work that we do, we make sure that we are protecting the environment, ensuring that our natural commons are respected, that we are in solidarity learning and supporting each other and that we’re leaving a healthy country and planet for future generations, being in harmony with mother nature and in community.”

As for Garcia, she has been an activist since her teenage years.

“Ever since I was 16 years old and by the time I went to college, I had already been involved in some sort of environmental activism because I grew up in a very natural environment,” Garcia said from where she now lives with her adult daughter and two granddaughters in Mayagüez in the main island’s western region.

“To see so many rivers disappear or turn into creeks — rivers that were so deep when I was a child — and to recognize that those changes took place over such a short amount of time made me realize that we are not doing something right,” she continued. “I got into Boricuá almost 18 years ago because what they are doing makes so much sense. Their focus is not just on farming, but also on educating ourselves and sharing that education as we try to find solutions to the basic problems we still have.”

Members of the PC(USA) delegation witnessed those problems firsthand when they visited a number of small-scale farms during their December 2018 trip.

“When we thought about the devastation of Hurricane María that was followed by a series of earthquakes and most recently tropical storms Isaias and Laura, we have been asking ourselves how the farmers have continued to farm when many of their farms were destroyed and a lot of their infrastructure was damaged,” said the Rev. Dr. Alonzo Johnson, coordinator for SDOP. “When we were in Puerto Rico, we visited a farm that was devastated by María. It was my colleague, Jim Kirk [of PDA], who asked the couple, ‘How are you surviving after María?’ They were in tears for a full five minutes trying to find the words to communicate to us about this. It was so intense. They apologized and told us that to even talk about María brings up trauma and everything they’ve lost because of it.”

Johnson said that Boricuá — with its engaged network of campesinos (farmers) — embodies the core SDOP message of “participating in the empowerment of economically poor, oppressed and disadvantaged people seeking to change the structures that perpetuate poverty, oppression and injustice.”

Boricuá is also one of the ally member organizations of the U.S. Food Sovereignty Alliance (USFSA), of which the Presbyterian Hunger Program is a founding member.

“It’s kind of mind-blowing and very inspiring to see how grassroots and hands-on Boricuá is, from a little elementary school in Orocovis, where they are teaching the children the basic philosophy of agroecology as well as practical skills, to their broader coalition covering all of the islands of Puerto Rico, including the two smaller islands of Vieques and Culebra, to their connections with the USFA,” said Andrew Kang Bartlett, associate, National Hunger Concerns for PHP, who later published a series of posts about the group’s 2018 visit on the PHP’s Food & Faith blog. In 2018, the USFA recognized Boricuá internationally with its 2018 Food Sovereignty Prize. 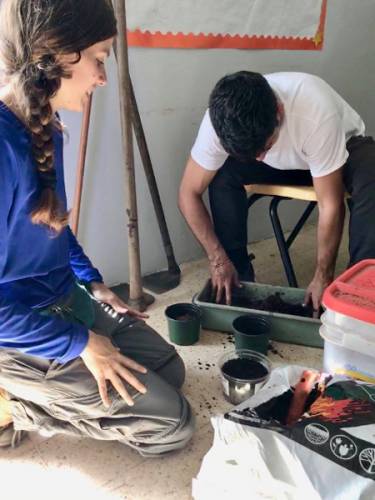 “Boricuá is doing fabulous work among farmers, allies, activists, academicians and people of faith to try to make a major shift away from a very export-import-oriented agricultural economy to one that is much more self-reliant and sovereign,” said Kang Bartlett. “They have been carrying the flag for food sovereignty for these three-plus decades by supporting farms and farmers, training young people to learn agroecology and to find land to set up farms, and creating marketing systems and farmers markets in cities where they can market their organic and ecologically produced mostly produce, but also chicken, eggs and more.”

Opening up outlets for the farmers to sell their crops and other products is critically important in the wake of COVID-19, during which Vázquez said the government has shut down 28 farmers markets.

“There are no markets right now for most of our cash crops or the ornamental plants that I grow,” said Garcia. “Right now, because people are only buying the most-needed things, the money isn’t coming in regularly because there is no market for what I used to do.”

Not only did the government close markets, Vázquez said that it was also arresting farmers for selling their food on the street and holding them for several days in police custody, prompting Boricuá to organize a group of lawyers to challenge this unlawful practice.

“Because this was completely unconstitutional, we succeeded in reaffirming that Puerto Rico’s farmers are essential workers and therefore need to be respected while doing their jobs,” he said. “We knew we needed to stand up.”

To support Boricuá’s ongoing efforts to promote farmworkers’ rights, agroecology and environmental justice, the three PC(USA) partners considered a joint proposal through One Great Hour of Sharing, in which each of the ministry areas participate, culminating in a grant to Organización Boricuá for their work in 2021 to build their capacity, to strengthen their communications and organizing, and to amplify their effectiveness around the islands.

“This is the kind of thing that speaks to us, because the way I read it is, every dollar you give is a dollar added to community resilience,” says Kirk, associate for Disaster Response (U.S.) for PDA. “If people are meaningfully employed, seasonally employed, if there’s better food security, it’s just a win-win across the board. As opposed to handing someone food to deal with immediate hunger, you’re giving them tools for long-term security.”

Although times are undeniably tough, Garcia will continue her involvement with Boricuá toward a more just Puerto Rico, a more sustainable planet and — remembering her ancestors — a better livelihood for her daughter, her granddaughters and future generations.

“I’m the type of person that to lose hope is complicated,” she said. “There’s a saying we have in Spanish, ‘no hay mal que dure mil años ni cuerpo que lo resista,’ which translates into something like ‘no hardship lasts for a thousand years; you must have patience during hard times.’ We are in a system in which we little ones are trapped, and we must find ways to survive. I think that’s what keeps me in Boricuá. Yes, we farm, but we also teach. And we fight for our rights. Yes, we still have hope.”