The church is responding to the Syria-Turkey earthquake, GIVE NOW!
Make A Donation Click Here >
Home › Have I got a story for you! 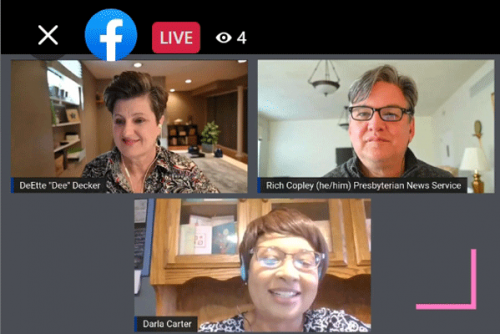 LOUISVILLE — Two storytellers who clearly love the illuminating and often powerful work they do shared some of what they’ve learned over their years in journalism during the Community Conversations Facebook Live event broadcast Thursday.

These two storytellers have bylines familiar to readers and viewers of Presbyterian News Service stories. Rich Copley is communications strategist for the Compassion, Peace & Justice ministries of the Presbyterian Mission Agency. Darla Carter is a communications associate with CPJ. The Rev. Dee Decker, the PMA’s social media strategist, interviewed Copley and Carter as part of the Communicators Network monthly online offering. Their 42-minute can be seen by clicking here.

“We talk to people all over the country about the good work they are doing,” both Presbyterians and their partners, she said.

Decker asked each to name a favorite story they’ve helped to tell. Both hearkened back to their newspaper days — Copley as an arts reporter and editor with the Lexington (Kentucky) Herald-Leader and Carter, who focused on health reporting for many of her years with the Louisville (Kentucky) Courier Journal.

Copley chose how he shared a story about famed photographers of the Harlem Renaissance, Morgan and Marvin Smith, twins who were born in Nicholasville, a little south of Lexington. Morgan Smith died in 1993, but later he and Marvin were being honored with a retrospective show of their photographs at the Speed Art Museum in Louisville. Copley wanted to see the exhibit with Marvin Smith as his guide, but Smith’s sister-in-law told him they had no way to get to Louisville. Copley offered to drive them, and they were met at the door by a host of museum VIPs.

“It was an amazing day. You could see how moved Mr. Smith was,” he said. “All the negativity that comes with growing up in the Jim Crow era, and then to see his work being exhibited — it was an honor to be part of it.”

One of the best ways to tell a spellbinding story, Carter told Decker, is to find someone who’s compelling and then tell the story through their eyes. As someone covering the Health and Fitness beat, she got that chance once when she and other reporters interviewed a woman who’d undergone a double hand transplant at a Louisville hospital. The surgical team and other hospital staff were present, but it was the patient herself whom Carter found captivating.

“She talked about how her faith had been an inspiration to her as she had gone through all of the ups and downs of the procedure,” Carter said. “As she faced going into therapy to learn how to use her new hands, her family was there, and you could see the excitement that they had.”

Carter also talked about how challenging it would be to have to do ordinary things, such as baking, if you lost the use of your hands.

“It’s important,” Carter said, “to bring in real people who are impacted and make the story relatable. Most people will go through a struggle … When you can convey that struggle, it can be a very effective way to tell a story.”

Why, Decker wondered, should churches be concerned with storytelling?

“It’s a way to get the word out about what you’re doing within your own congregation, and also occasionally you can communicate that to the wider community,” Copley replied. “Finding people is a really important element. People like reading and hearing stories about people.” PC(USA) storytellers sometimes run into “Presbyterian modesty,” he said, which is “a barrier to our storytelling. They don’t want to be the center of attention,” but they happen to be one of many Presbyterians “with great stories to tell,” he said.

For Carter, storytelling at the congregational level relates to the PC(USA)’s Matthew 25 invitation, which is in part a plea for churches “to reach outside the four walls, the confines of the building, so that churches are making a difference in their community,” Carter said.

Some people view church parking lots with fewer and fewer cars on Sunday morning and think, according to Carter, “Does anybody there really care about me?”

“When you tell your stories, you can show the community you care, and these are the topics we care about. These are the programs we have started in order to reach you and your family and make the community at large better. One of the best ways to convey that is storytelling,” even if church members might feel they are doing Matthew 25 work “without the big headlines,” she said.

Another tip: Don’t always count on the pastor to take the lead in telling the church’s story, Carter said.

“The pastor may be drafting the sermon or maintaining the budget and may not know the stories of ‘the least of these,’” Carter said. “If we listen, often we will hear great stories to tell.”

Speaking of listening, the two storytellers were asked about how they prepare questions and conduct their interviews.

CNN’s Larry King famously deployed little or no preparation, “and it apparently worked for him,” Copley said, “but I would never feel comfortable doing that.”

Copley said he learns all he can in advance, then outlines the topics he wants to cover. “But I try not to be too structured so I will be open to listening. You hear a response and then you want to hear more about what they just said.”

“It reminds me of being present in the moment to where the Holy Spirit is leading the conversation,” Carter said, “and what story the Spirit wants to be told.”

Oh — and don’t forget to get out of the way of the story, Carter said.

“You are trying to tell a story. If you’re too married to a set of questions, you won’t be ready to go the way they want to go,” Carter said. Sometimes she’ll listen to a recorded conversation and kick herself for interrupting with the next question, she said.

“I want to be a fly on the wall. I want to listen and take it all in,” she said. “You need to be able to make the person comfortable talking to you and let them run with it.”

The best compliment as the interview is wrapping up, Carter said, is for the person to say, “I really enjoyed talking with you” or “I’m so glad we met,” even if it’s over the telephone or by Zoom.

“You need to make that connection and make it a pleasant experience,” she said. “Sometimes the best information comes after the interview. You say to the person, ‘tell me more. That’s interesting.’”

The storytellers also discussed a current emphasis to include digital storytelling, whether it’s video or audio, as part of modern-day reporting.

“Rich is one of those rare finds in that he can do both,” Carter said. “It’s just a different thing. You’ve got to open your eyes in ways you don’t always do as a print reporter. A visual journalist sees in ways we print journalists can’t.” Communicators in the Presbyterian Mission Agency “realize [digital reporting] is a valuable medium and that more people are now getting their news” that way, she said.

“It’s a great thing to hear people tell their story in their own voice,” Copley said. “Weaving it together [with print reporting] is important too.”

Just not at the same time, he cautioned.

“You can get overwhelmed being asked to do [both] in a compact timeframe,” he said. “Better to focus on your own way. I like to be doing one thing at a time if that’s at all possible. If I’m writing, I like to focus on that. If it’s video, I focus on that, or the photos. We don’t want to get too bifurcated.”