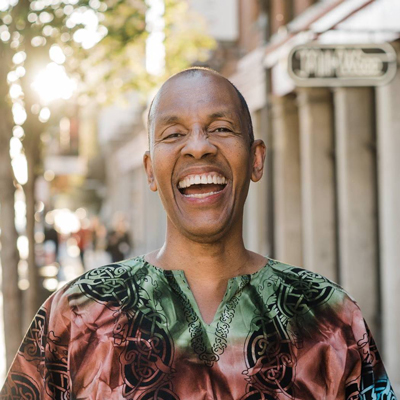 Harry Pickens will be a special guest on the final day of CPJ Training Days, which takes place April 7-9 online. (Photo by Tim Harris)

LOUISVILLE — Though Harry Pickens is perhaps best known as a jazz pianist, he also has a passion for teaching people how to bring out the best in themselves during the toughest of times.

So it’s apropos that he will be sharing his wisdom during Compassion, Peace & Justice Training Days next month. The event comes at a time when the country continues to grapple with the COVID-19 pandemic, a difficult political and economic climate, racial injustice, and mass shootings.

“Most of us are living under much higher levels of general stress than even we were five or 10 years ago, and so the work that I do helps people with very simple, practical [practices] … to help them find a way to bring their greatest strengths, their greatest capacities, to whatever they’re facing,” he said.

Pickens, 61, will speak during the final day of CPJ Training Days, which is the virtual version of CPJ Day, an annual advocacy training event by the Presbyterian Church (U.S.A.) Office of Public Witness.

And, yes, Pickens will play a little music.

“I’ll use it as a way of introducing the core points and then principles, but it’s not a musical presentation, per se,” he said.

Pickens’ interest in teaching people resilience and mindfulness techniques stems from his own personal adversity.

“When I was 17, my greatest desire was to play the piano professionally, and my greatest obstacle was I had terrible stage fright, debilitating stage fright, such that I would not sleep for a week before performing, such that I would throw up for four or five days before. That obstacle led me into what’s now like 40 years of study of psychology and neuroscience and spirituality and all these things.”

Pickens noted that high stress levels can lead to negative effects on the body as well as acts of stupidity.

“For me to be my best self, to show up as my most creative [self], I have to develop capacity to build what’s called my state of coherence. That’s like mind, body, brain, being, harmony.”

Pickens contends that activists who want to be effective and set good examples should take time for inner work and self-care.

“If I’m on the frontlines, and all I am is a pissed off, upset, burned-out activist, No. 1, I’m not going to be as effective. No. 2, I’m going to set an awful role model for anybody else. From a very practical standpoint, the wisest thing you can do if you want to be effective is to ground yourself in self-care.”

Pickens strives to help people recharge and renew, and “let go of what bothered you yesterday so it doesn’t come into today.”

He acknowledged that there are people who are faced with “social pathologies that impact” them on a daily basis.

CPJ Training Days will be followed by Ecumenical Advocacy Days, which will take place April 18-21. Click here to learn more.

The Office of Public Witness is one of the PC(USA) Advocacy Offices, which are part of the Compassion, Peace & Justice ministries of the Presbyterian Mission Agency.