Preparing our hearts for resurrection

This article originally appeared in the January/February 2017 issue of Presbyterians Today.

A Q & A with Michelle Bartel – Coordinator of Theological Education and Seminary Relations for the Presbyterian Church (U.S.A.)

We use the season of Lent to prepare our hearts and minds for the mystery of the resurrection. But we all do that differently. Some churches place ashes on the foreheads of worshipers on Ash Wednesday; others don’t. Some “lock up” their “Alleluias” until Easter morning, others host a weekly fish fry, and still others hold special midweek justice or outreach programs. We decided to ask one of our theologians about the meaning and practices of Lent. 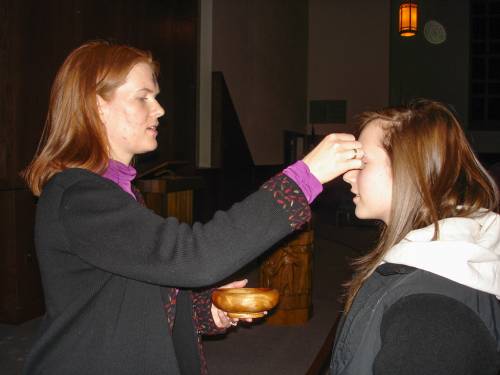 PT: What is Lent?
MB: Lent is a Christian season of practice, celebrated by some Christians though not all. It’s not a prescription for holiness, but an invitation to relationship. Lent has its roots in the very early church, with some of those roots in preparation for baptism. During Lent the Scriptures remind us of God’s expectations for Israel, Jesus’ temptation in the wilderness and his journey to the cross.

Lent is still a mystery to me. I wasn’t raised Presbyterian, and didn’t become one until I was 16. Plus, I grew up as a nondenominational evangelical Christian and lived in a rural area with a large Catholic population. This meant the most popular Lenten practice was the local fish fry.

Since many Catholics traditionally give up meat on Fridays during Lent, they eat fish—and invite the community to join them. The practice has spread to Protestant churches as well. For some areas, Google even has a fish fry map that features local gatherings.

But the fish fry isn’t just about giving up meat. It’s also about taking on the practice of being in community as people gather over a meal.

PT: Why do we celebrate/observe Lent?
MB: Lent is a time for us to focus on Jesus and our Christian discipleship. What does it mean to follow the One who lived, died and rose from the dead for our salvation?

Lent is a chance for us to practice, every year, focusing on God in Christ. We remember God as immersed in earthly life with our earthly practices.

One of the most common Lenten practices is fasting. This can mean giving up certain foods or habits like expensive coffee or cigarettes and donating the money to helping others. One of the questions we must ask is: Are we practicing the fast God calls for? Is it a fast that reminds us to love God and love neighbors as ourselves? Are we focused on God’s work and Jesus’ ministry to the poor, vulnerable, oppressed, sick and lonely? Are we practicing love, kindness, justice and mercy?

By fasting, we practice denying the self not just for the heck of it or to drop 10 pounds, but for the purpose of shifting our attention to Jesus. It’s a question of vision, of focus. Are our hearts curved in upon themselves, or are our hearts open to God?

But Lent is not just about fasting, or giving up something. It can be about taking or adding something. For some, Lent can be a time of adopting a new practice. This can mean engaging in walking prayer, Bible study or some other active habit that trains us in a certain direction and focuses us on Christ.

PT: How many days is it, anyway?
MB: Lent is 40 days long, from Ash Wednesday to Easter Saturday. But if you count the days on the calendar, that’s more than 40. That’s because Sundays are excluded. They’re considered “mini-Easters,” since they’re the day of resurrection. So, no fasting on Sundays!

PT: Is Lent biblical?
MB: As with many Christian practices, the fruitful question to ask is: Is it biblically based? Is “Lent” in Scripture as a word or as a church practice? No. But it is biblically based. Our call to justice and mercy runs throughout the Old and New Testaments, as does the practice of fasting. Jesus teaches what he learned, that to love God is to love neighbor.

PT: Should everyone observe Lent in the same way?
MB: Actually, I don’t think “should” is the right word. We are called to do what we do together as a people, a community, a congregation, so we practice Lent together. But even though we practice it together, we do so as individuals. Each person in the group may not be called to do the exact same thing.

For example, someone like a busy mom, who is always giving of themselves for others, might be called to revel in the gifts God has given them, rather than give up even more. Another person who depends on the service of others may be called to reverse that role through the Lenten season.

I am known for my chocolate habit. So, for me, it might be a good practice to give up chocolate for myself, but to keep it with me for others. That way, I would practice loving my neighbors, as Jesus taught me to do.

That may seem trivial. But if one is really committed to it—thinks about it daily, prays about it daily—is it trivial? Or does it help us to open our hearts to God by opening them to others? Some of the most spiritually significant moments in our lives are mundane.

What if, for Lent, you took up the practice of five minutes of looking at the sunrise in the morning, and sunset in the evening? Considered the way in which God takes you from morning to evening and morning again? It can be easier to remember God’s presence with us in the golden-pink colors of sunrise and sunset. That’s a gift. It’s also a gift from God that the sun is rising and setting even when we can’t see it because it is blocked by clouds, snow or fog.

We give things up or take on practices because we need to learn again and again that we live and move and breathe and have our being in God.

PT: One account told about people who drink nothing but beer during Lent. Why?
MB: There are records of monks fasting during Lent, giving up all food. To sustain them—in the times of unhealthy water—they would drink beer, or liquid bread. Beer had nutrients, including carbohydrates, needed for survival. Honestly, this is not a fast I would attempt these days without supervision from a health professional.

Of course, if you are going to seriously fast from food or water for 40 days of Lent, I strongly encourage you to share that plan with a health professional you trust.

PT: Should we eat less chocolate or drink more beer? What’s a good Presbyterian to do?
MB: The fruitful question to ask is: What am I called to do during Lent, as a faithful Christian? Being a “good Presbyterian” will tend to focus our energies on fitting a measure that doesn’t keep us focused on God. That’s a temptation for us: Who decides what a good Presbyterian is?

But as Presbyterians we are called to dwell in Scripture, to be immersed in it. To let the words, poetry, images, commands, stories and hymns seep into our hearts and imaginations. During Lent, Presbyterians can deepen their Presbyterian spirituality and Christian discipleship by sitting with Scripture so that we intensify our efforts to focus on the living God in Christ, to whom Christians bear witness.

My suggestion for a Lenten practice is to sit with Scripture every day. Open your minds and hearts to God, so that Jesus himself can teach you what it means to be his disciple. It may be that giving something up or taking up a new practice would help that focus.

And, in any case, keep one another in prayer. The season of Lent draws us to focus on Jesus Christ. who was born, lived and was crucified—and then raised from the dead—for us and for our salvation.