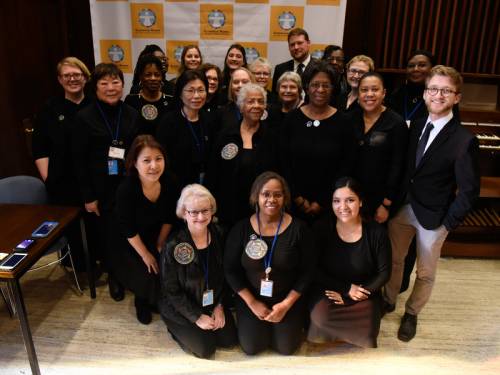 The Presbyterian delegation to the 2019 UN Commission on the Status of Women participated in the Thursdays in Black campaign to raise awareness of gender-based violence. (Photo by Rich Copley)

LEXINGTON, Kentucky — In the shadow of a mass shooting in the United States that targeted women of Asian descent and the reality of the violence that women around the world face every day, Ecumenical Women at the United Nations turned its attention to violence against women in a parallel event to the 65th Annual UN Commission on the Status of Women last  Thursday.

Opening the “Girls on Fire” event, Church Center to the United Nations Chaplain the Rev. Dionne Boissiere welcomed viewers “to this most urgent conversation, because the lives of women, women and girls are imperative … and the sacred worth of every life of women and girls, and the marginalized, needs to be protected, to be seen as valued, and of course, to be able to have the justice due us as our own human rights.”

More than 20 Presbyterians from the Presbyterian Church (U.S.A.) and Presbyterian Women are participating in the 65th Commission on the Status of Women (CSW) and caught the event, which is part of the Thursdays in Black campaign to raise awareness of violence against women.

The conversation included women with long histories in the fight against gender-based violence and newcomers such as 18-year-old Claire Jackson, a senior at Verona Hills High School in Verona, New Jersey, who is president of her school’s chapter of Girls Learn International, an organization that leads middle and high school girls in advocating for human rights, equality and universal education. The group’s alumni include Amanda Gorman, the young poet featured at the inauguration of President Joe Biden on Jan. 20. Jackson said her school’s chapter had taken on domestic violence and dating violence as issues.

That is nothing new, other speakers highlighted.

“We’re still in the same place and 2021, as we were in 1980, in terms of our consciousness,” said the Rev. Dr. Sally N. MacNichol of Connect NYC, one of the event co-sponsors. “Look what just happened. I’m on fire about what just happened in Atlanta. And even if you look at the way the media is reporting it, those people, the women particularly, are being treated in death as they have been treated in life.

“I have spent a lot of the last 20 years working with faith communities and building ministries and I can tell you that it is very, very difficult work. And there’s a lot of patriarchy that blocks the work. There are many women in faith communities doing this work, but they have so many obstacles to go against. And the reason they do their work is because they know that faith is what pulled them out of … that is what pulled me out of my abusive relationships. That’s what made me strong.”

Evon Benson-Idahosa, an attorney, co-founder and executive director of Pathfinders Justice Initiative, an event co-sponsor, also spoke of her own experience with gender-based violence, and her realization as a young woman growing up in Nigeria that she was not alone.

Benson-Idahosa reflected on the kidnapping of 276 girls from a school in Chibok, Nigeria by the terrorist organization Boko Haram. Groups and individual girls have been rescued or escaped, but many remain missing, forced to convert from Christianity to Islam, married to members of the terrorist group, some sold into sexual slavery. Chibok made international news because of the number of girls who were kidnapped and the stories of what happened to them, but these are familiar tales in Nigeria and across Africa, she said.

“There’s a reason why women have to be strong. And it takes that focus from that particular reason: the underlying systemic injustice, the racism, the patriarchy, the xenophobia, and instead places it as a burden on the woman by calling her resilient. For me, that is the reason why I come to this work with a sense of reverence, I come to it with a sense of a really sacred space that we’re curating, in many ways, by working with women and girls.”

Before Benson-Idahosa spoke, participants in the workshop heard from a Nigerian woman who was forced into prostitution in Nigeria and her harrowing story of physical, sexual and psychological abuse.

One of the things all speakers said has to happen is men have to join the effort to end gender-based violence. Several Presbyterian participants in the event said they were particularly impressed by Prof. Ezra Chitando of the University of Zimbabwe, who said, “If to be a man means I have to beat women, I honestly and strenuously refuse to be a man, if masculinity must be expressed in ways that cause harm and violence to women and girls. If becoming a man means I must suffocate women and girls, I refuse to be a man.

“So this is the message we are taking to young boys and men across communities of faith to say, there is a different way of being a man.”

Kay Woods,  a deacon at Three Rivers Community Presbyterian Church, part of the Presbytery of San Joaquin in California, said, “Perhaps by encouraging young boys and girls to talk with one another, and help boys to raise their self-esteem too, manhood can be redefined by all men.”

Joy Durrant, Presbyterian Women Vice moderator for justice and peace concerns, reflected on the American high school student, Claire Jackson, and her comment that even with a safe space group of 30 girls at her school, she still has a hard time getting people to take gender-based violence seriously.

“People tell her generation, you’re too young, you don’t understand,” Durrant reflected. “None of this stops her from talking about gender-based violence.  Although she is younger, she has a valid experience and a valid opinion. She wants a seat at the table — and wants others who have been affected by gender-based violence … to be heard.”

Woods acknowledged feeling the same thing some panelists said about the constant struggle against gender-based violence being tiring. But to her, the event was invigorating, particularly because of the cross-generational conversation.

“I came seeking signs of intergenerational fusing, of finding some young women eager to work with older women and put forth their strong, creative, determined, brilliant, angry, loving, cooperative energies with us older women,” Woods said. “Seeing and hearing girls like Claire seek our support and ask us to put our voices out into the mix for them just does indeed bring me to the fire too. May God fan the flames!”