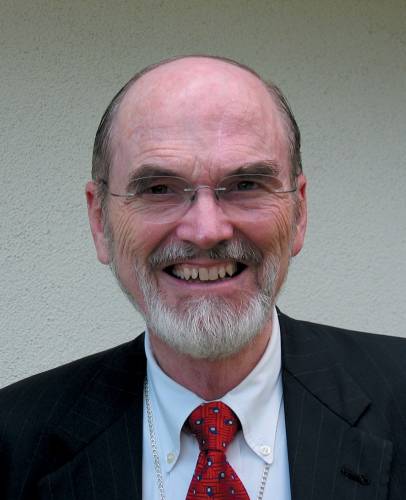 A native of Nebraska, Rogers was an honorably retired member of San Gabriel Presbytery. He was Professor of Theology Emeritus of San Francisco Theological Seminary, where he also served as vice president. Rogers past leadership roles include assistant academic dean at Westminster College, Pennsylvania; associate for theological studies in the Office of Theology and Worship at the PC(USA); and associate provost and director of Presbyterian ministries at Fuller Theological Seminary.

“Nearly 35 years ago this month, Dr. Rogers professed his belief in my call to ministry and voted to approve my candidacy as a Minister of Word and Sacrament in San Gabriel Presbytery,” said Ruling Elder Tony De La Rosa, interim executive director of the Presbyterian Mission Agency. “His belief in my call never wavered, even when the presbytery later determined otherwise. I believe—without any doubt—that he sings today with the angels. Rest in peace, dear brother Jack.”

Ordained as a teaching elder in 1959 by the former United Presbyterian Church in the U.S.A., Rogers graduated from the University of Nebraska in 1955 and from Pittsburgh Theological Seminary with his M.Div. in 1959 and his Th.M. in 1964. He also earned a Th.D. from the Free University of Amsterdam in 1967 and a D.D. from Westminster College in 1989.

“It would be difficult to find anyone in our communion who hasn’t been touched by Jack’s work,” said the Revs. Denise Anderson and Jan Edmiston, Co-Moderators of the 222nd General Assembly (2016), in a statement. “As pastors, we’ve used his writings in elder and deacon training, as well as preparation for ministry. He was an educational and theological powerhouse, and a champion for the marginalized. As Co-Moderators of the 222nd General Assembly, we stand on his shoulders and are immensely grateful for his work. Along with other Presbyterians and Christians who were blessed by him, we mourn this loss and celebrate the gift he has been to us all. Our prayers are with his family, his inner circle, and all for whom this loss is palpable. We believe our Lord’s pronouncement of blessing upon those who mourn; that they will indeed be comforted.”

“Jack Rogers’s scholarship embodied a willingness to question apparent certainties even in his own theology,” said the Rev. J. Herbert Nelson, II, Stated Clerk of the General Assembly of the PC(USA). “His quest was to claim partnership with his Creator. Today, Jack’s partnership is complete. Well done Jack. Well done!”

Rogers’s books include Reading the Bible and the Confessions, Claiming the Center: Churches and Conflicting Worldviews, and Presbyterian Creeds, all published by Westminster John Knox Press.

“Jack Rogers, among his other accomplishments, was one of the members of the staff of the new Theology and Ministry Unit after reunion,” said the Rev. Dr. Charles Wiley III, coordinator of the Presbyterian Mission Agency’s office of Theology and Worship. “In that role, and continuing on, he always saw himself as a church theologian. In particular, his book on the Book of Confessions has helped hundreds of students study for and pass their theology ordination exams.”

“Jack Rogers was a man with a gentle spirit and a steely resolve,” said the Rev. Gradye Parsons, outgoing Stated Clerk of the General Assembly of the PC(USA). “He brought a very gifted academic mind into the heart of any issue. I am a better Christian because of Jack and the PC(USA) is a better church because of his leadership.”

Following his election as PC(USA) Moderator in 2001, Rogers said, “Unity does not mean uniformity. There is room in this body of Christ for all of us and this Assembly we can find that to be true.”

Rogers is survived by his wife Sharon, three sons, John, Matt, and Toby; and three grandchildren.

“Jack was a personal friend, colleague, and a wonderful man,” said the Rev. Mark Smutny, who until last Sunday, July 10, was pastor of the Pasadena Presbyterian Church, where Rogers worshiped and his wife is a member.

The family is asking those planning to attend to RSVP here.

A brief overview of Jack’s life and accomplishments has been posted for viewing on Jack’s website.